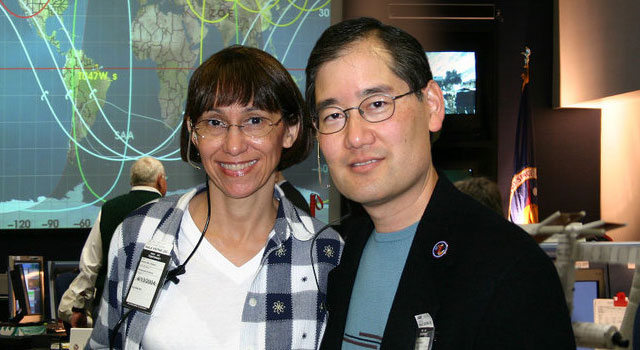 Michael and Denise Okuda have worked on Star Trek since the mid-eighties. In that time they’ve worked as designers, consultants, technical supervisors and everything in-between.

The couple’s latest Trek-related project is the upcoming release of Star Trek: The Next Generation as it get converted to high-definition for Blu-ray release. They recently discussed the project with StarTrek.com in a special two-part interview.

How helpful was it that both of you were actually there at the very beginning, back when these TNG episodes were shot on the stage?

“In some ways, very helpful, because there are times when they can say, ‘Oh, what was this?’ I can say, ‘Oddly enough, we were there when that was shot.’ On the other hand, a lot of it is simply that we’re now trying to be the eyes and the ears of the original visual effects supervisors, the original producers, the original directors, the original cinematographers, and we’re simply trying to do whatever we can to preserve what they originally wanted to do.” said Michael.

What has it been like for the two of you to sit there and watch work you did 25 years ago, in essence, come back to life – both in little pieces and as entire episodes?

That’s better-looking than I remember it being”

The couple went on to discuss rewatching work they had done 25 years ago.

“It’s absolutely amazing. As proud as we are to have been associated with the Star Trek productions, it’s done, you’re proud of it, you’ve worked so very hard on it… and then you move on. Now, to come back and go, ‘Oh, wow,’ it’s amazing. Part of you goes, ‘Oh, I wish we could have done this’ or ‘Wow, that holds up really well’ or ‘That’s better-looking than I remember it being’ or ‘That’s really elegant.’ Whenever we review an episode, we find ourselves getting sucked into it again.” said Michael.

“And tripping down Memory Lane as well. Memories are buried and then you see something, and it triggers a story or feeling or ‘I remember that day. This was going on.’ So, for us personally, that’s a lot of fun. But, again, for us, working on Star Trek has been an amazing thing in our lives. We keep thinking, ‘Oh, this is the last Star Trek project we’re going to work on,’ and yet things keep coming up, for which we are grateful, because working on Star Trek is a lot of fun.” Denise added.

They went on to discuss their favorite episodes from the series seven-year run.

“You know, it’s a cliche, but every episode is special in its own way. ‘Farpoint’ was the first. It was such a mountain to climb. We were breaking such new ground. It was the first we did everything: the first control panel, the first time you see the ship, the first time you’re going to be transported, the first time you’re on a new planet. It was all those things. To see that and bring it back again, it’s a delight to say, ‘Oh, yeah, that pretty much held up’ or, ‘You might want to tweak this or that.’ On the sampler disk we also have ‘Sins of the Father’ and ‘The Inner Light.’ To go through those again, it was just amazing to see and remember the dramatic depth and breadth and power that Star Trek: The Next Generation developed.” Michael said.

“And, personally, I think ‘The Inner Light’ is such a powerful episode. It crosses lines. It crosses lines between fans of Star Trek and then just the general public, because you can take somebody who’s never seen TNG and sit them down and have them watch that episode, and you get sucked in. It’s just such a beautifully written episode that I couldn’t wait for them to do that. And, fortunately, it’s one of the first we got to do. said Denise.

Since the official announcement of the project, fans have been heavily anticipating the release of all seven seasons of TNG in HD. During the interview, the Okudas went on to talk about how far along they are in the overall conversion process and how much time has already been invested in it.

“It’s kind of hard to measure because we – CBS and us – are simultaneously working on several different episodes as several different stages. So it’s hard question to answer. But we are still on the first season.” said Michael.

“We got a call a couple of years ago from producers Ryan Adams and David Grant, explaining the process and asking us, if this project were green-lit, would we be interested in participating. After listening to all the details and the complexity, we said, ‘Sure, of course we’d be interested.’ We hung up the phone and looked at each other and said, ‘It’ll never happen.’ Then, of course, to our amazement and delight, a year and a half later it went forward.” said Denise.

The three-episode sampler disc, Star Trek: The Next Generation – The Next Level is currently available for pre-order through Amazon for $14.99.

Watch the latest trailer below.

Read the entire two-part interview with Michael and Denise Okuda at StarTrek.com.

In this article:Interview, Mike Okuda, Star Trek: The Next Generation