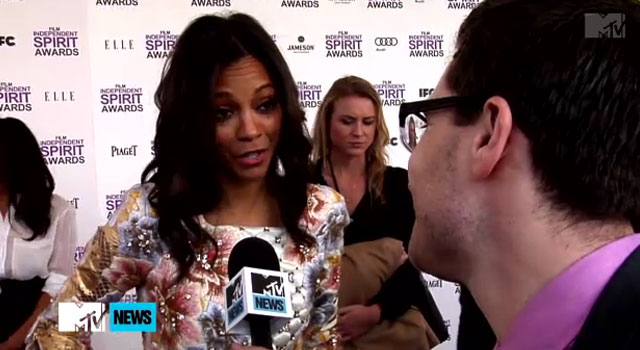 On Saturday, at the Independent Spirit Awards, MTV spoke with actress Zoe Saldana on the red carpet. Saldana discussed J.J. Abrams’ reaction to the recently leaked photos from the set of the Star Trek sequel.

“J.J. was very upset,” she said. “I have to say that. It’s not going to stop people from intruding, but they are, and it’s such a bummer because it only hurts them by stealing away the surprise.”

The leaked photos featured Saldana as Uhura as well as her Star Trek co-star Zachary Quinto as Spock as they battled the films villain, Benedict Cumberbatch on what’s being described as a “space barge.”

In this article:Interview, Star Trek Into Darkness, Video, Zoe Saldana