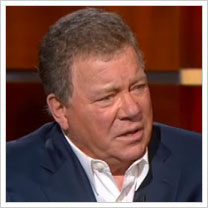 As part of the press junket to promote his broadway show (and subsequent tour), William Shatner visited Comedy Central’s Colbert Report on Tuesday to discuss his one-man show, Shatner’s World.

Colbert went on to compliment Shatner, saying “I want to talk about Star Trek for just a second — Man to man, I’ve got to say just how god-damned beautiful you were on that show,”

Shatner proceeded to beat Colbert in a quick arm wrestling match, calling him a “weakling.”

Watch the clip below.