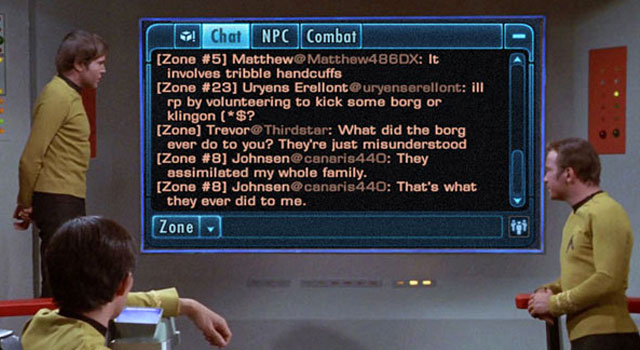 Ok. I admit it — It’s been awhile since the last installment of Federation Follies, where I discussed some of my favorite Star Trek episodes to watch around Halloween.

I had a list of excuses as long as my arm ready for the editor here at TrekNews.net. Chief among them: my wife and I had a baby! But I’ve also been working! And Evil Picard turned my desktop computer into a makeshift still! There were LOCUSTS! All true (mostly), but not the real reason I’m been M.I.A.

No, the truth is far more shameful.

Ever since the game went free-to-play, I’ve been flying around in my wicked starships, chasing Romulans, cheating on Academy exams, and doing my duty rosters. DUTY ROSTERS, PEOPLE. Seriously, forget what you think you know about Star Trek: Duty Rosters are EXTREME TO THE MAX.

After flying solo for a month, I suddenly remembered that this was a multiplayer game. “Sure,” I mused, “I have an elite cadre of computer-controlled officers to assist me, but aren’t there also real people playing this thing?” I opened my eyes to the larger universe around me… and realized that apparently the Federation had completely tossed all those “morals” and “ethics” out the nearest airlock while I was sending all those junior officers out on diplomatic missions. If you decide to try a little free-to-play STO (and you should), you can see all the following and more for yourself at startrekonline.com/f2p.

Captains Can Buy & Sell Officers At Most Starbases. I think I made enough off my extra Armory Officers to run the replicators for a month and a half. Extra Earl Grey Tea and phasers for everybody!

Tribbles Will Eat All Your Stuff. … and there goes the tea. Guess it’s just the phasers, then.

Tribbles Will Improve Your Battle Prowess. Carry tribbles, GET TUFF. Makes no sense, but it’s still funny to beam down an away team and have your Vulcan first officer start petting his tribble in the middle of a firefight.

“Petting His Tribble” is Not A Euphemism, It’s Just What Happens. Get your mind out of the gutter!

A Starbase Full of Ships Is Available to All… For the Right Price. Just a Lieutenant (Junior Grade)? No matter; open that wallet, pal, and you can own ALL the ships. The economics of the future ain’t that different after all.

90% of the People Who Type in the Chat Window Think You’re a Moron. “Peace and understanding of that which is different” went out the door with that hippie Picard, n00b. Set phasers to NERD RAGE.

The Other 10% Do Not Speak English. Malfunctioning Universal Translator, perhaps? How did they finish the tutorial without reading any of it?

Seriously, if the battle at Wolf 359 had gone down like group assaults I’ve joined, the Borg would have assimilated half the Earth while everyone in space was still bickering. Imagine Riker on the Enterprise, hollering over the comm at everyone to STOP USING KINETIC WEAPONS YOU %#^#&^ING $%@#$s; half the fleet flying in circles not doing anything; a handful of Captains trying to calmly explain what to do while some random lieutenant named Corporal Giggles tells them he totally saw a video on subspace showing exactly what to do and you guys totally just have the wrong tribbles equipped; and two alien officers with their universal translators turned off just ramming the Borg cube, transporting out to different ships, and then ramming said cube again.

Before you ask in the comments: Yes. This game is FUN. Wait. Why am I still typing? I’ve got Duty Rosters to get back to!

“Federation Follies,” a humor column by Willie Laundrie II, looks at the lighter side of Star Trek.