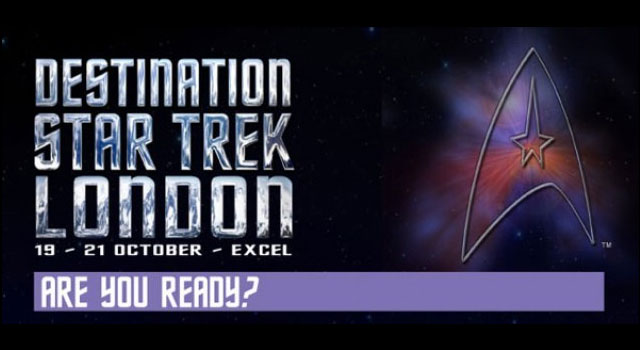 While additional specifics are still forthcoming, we have some more information regarding the upcoming Destination Star Trek London event.

A few weeks ago a mysterious website appeared online, teasing the arrival of some kind of Star Trek event coming to London. While the site didn’t offer any details or an explanation of what kind of event or attraction was coming, speculation has run rampant. From the largest Star Trek convention in history to the resurrection of Star Trek: The Experience, the rumor mill has been churning.

Earlier this week, we received a little more information on what we may be in-store for.

The event will take place October 19 – 21st at ExCel London, a convention center in the London Borough of Newham, England. Thus far, the details include:

• Meet the stars of Star Trek.
• Get Autographs
• Pose for Professional Photographs
• See realistic sets, costumes, and props
• Watch stunning stunt shows
• Hear amazing talks from the people who made it happen

While the details are still a little vague, it sounds like London is in store for a large Star Trek convention.

Star Trek London has promised to reveal the first group of guests, ticket information and an official website on April 16th.

We’ll keep you updated with any additional details.

From what’s been announced, will you be headed to the UK in October for this? Let us know in the comments.