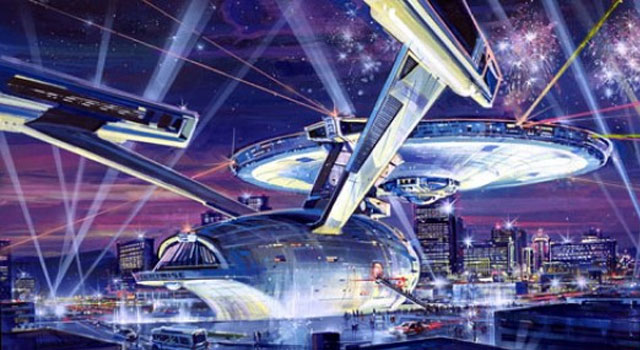 From January 1998 to September 2008, Star Trek: The Experience inside the Las Vegas Hilton was an amazing attraction and a destination for Star Trek fans from around the world.

However, in 1992 there were plans for a much larger Star Trek themed attraction in Las Vegas. In a contract that was nearly won by the Goddard Group, a full-scale $150 million Starship Enterprise could have been built in the downtown area of Sin City.

Recently, Gary Goddard, head of the Goddard Group, told the story of what could have been, on his blog. 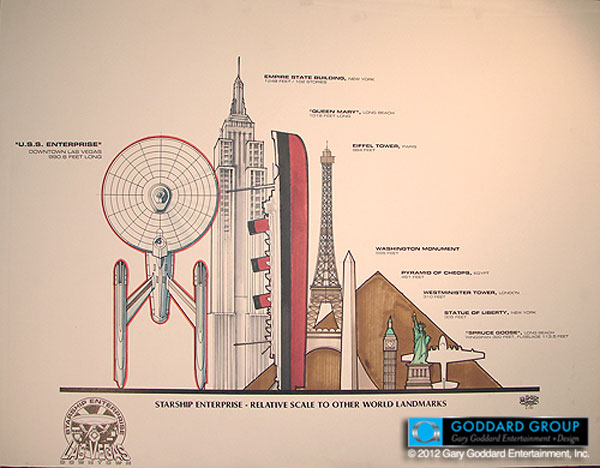 “The real winner of the 1992 downtown Las Vegas redevelopment competition was NOT the FREMONT EXPERIENCE – it was the STARSHIP ENTERPRISE from STAR TREK.  But no one knows this – until now.” Goddard wrote.

“They put the word out and a number of ideas were considered, with only two of the concepts getting down to the finals.  One was “THE FREMONT EXPERIENCE”; and the other was “THE STARSHIP ENTERPRISE”. THE STARSHIP ENTERPRISE was created and designed by Gary Goddard and his team of designers at Landmark – Designer: Chuck Canciller; Illustrator: Greg Pro; Planner: Mac MacElrevey.”

“The competition called for something that would “become an attraction of such magnitude that it would draw people from the strip,” and ideally it was to also provide “a destination attraction” that would “re-establish the downtown core as the center of the action in Las Vegas.” A major task – one that would be almost impossible to achieve.  The other catch was it could not be a hotel or a casino because the other hotels and casinos in the area were going to be paying for this attraction to bring people to THEIR places of business, not to have another competitor down the street.”

“My concept was to do something so large and so epic, it would fire the imaginations of people around the world.  After looking at how difficult it would be to bring people to the downtown core (from the Strip), I knew we had to have something really exciting, dynamic, and without equal.  We kicked around a few ideas, and then I came up with something really unique.  I went to Chuck Canciller, my lead designer then – and a genius as well – and said, “What if we built the STARSHIP ENTERPRISE – FULL SCALE  – on the land at the end of the street.  Imagine that…”  Chuck looked at me as if I had lost my mind, but by that time he also knew I was serious about big ideas like this.  He immediately started working on some ideas.”

Read more at the Goddard Group.