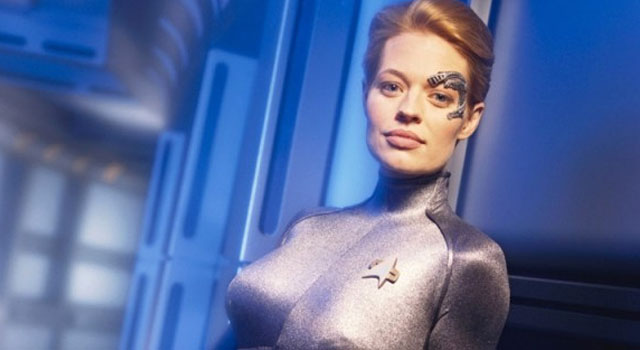 In a new interview with the Huffington Post, Body of Proof star and Star Trek: Voyager’s Jeri Ryan talked about her time on the series, as the attractive Borg known as Seven of Nine.

During the interview, Ryan discussed former castmates, the cat suite, her favorite Voyager moments and more.

“I haven’t seen an episode in years, actually, and I usually only see snippets or pictures. It’s kind of funny because it feels so long ago. Oddly, in a way, it also feels like yesterday.” Ryan said when asked if she ever watches old episodes of Voyager.

“Apparently they don’t wear bras and underwear in space. It was a very elaborate undergarment.” Ryan said about her famous cat suite she wore on the show. “I have to say that Robert Blackman, the costume designer, is an absolute genius. That costume was a real feat in engineering, because the producers had said that they wanted it to look like skin, to be skin-regenerative fabric. For the breast mound, they wanted two individual breasts and they wanted it to hug every curve, like skin.”

Ryan went on to discuss some of the animosity on-set while working with Kate Mulgrew.

“It was not a super-easy four years for me, I will say that. It does not stick out as a wonderful, wonderful work experience. It was tough. It was difficult.” she said.

Discussing her favorite memories from the show, Ryan said “I don’t have a favorite moment specifically, but some of my favorite episodes are when Seven was really starting to explore her humanity. Like when The Doctor was teaching her to date — I thought that was a really lovely episode. Those episodes weren’t just the “haughty Borg looking down on humanity” theme. She was more interested in learning about humans.”

She talked about her fear of being typecast as a sci-fi character, saying “That was a huge concern for me when I signed on initially. My agent came to me three times with this role, and I kept passing. I kept saying, ‘Absolutely not!’ I wasn’t a Star Trek fan. I never watched it. All I knew was that the actors are pigeonholed and that’s all they do. It was so early in my career I didn’t want to kill it.”

“What really got me to do it was one particular audition scene. Well, there were two. One which I absolutely hate, which was the infamous “Harry Kim, take off all your clothes” scene, which, of course, they shot and used. The other one, which they didn’t shoot, was so beautiful. It was Seven and she was with Chakotay, and she has her first experience of laughter. In that scene, I really saw the possibilities of the character. That’s what got me to do it. I’ve been lucky, though. Immediately afterwards, I was on Boston Public, and I just kept going from there.”

In this article:Interview, Jeri Ryan