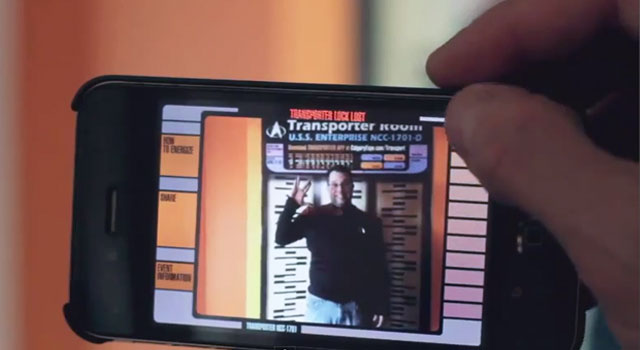 Of all the iconic science fiction technology synonymous with Star Trek, possibly most recognizable is the teleporter. A somewhat temperamental machine, the device has sent the several different crews of the series to alien planets, enemy ships, and (on its bad days) mirror universes. Now with Star Trek: The Next Generation celebrating its 25th anniversary, the town of Vulcan, Alberta has teamed up with The Calgary Comic and Entertainment Expo and E-Axis to bring one of Star Trek’s most beloved staples into reality with a promotional Transporter app for iPhone and iPad.

Two displays have been set up in Calgary, AB bus shelters by the Ontario based tech company E-Axis and the Vulcan Tourism Bureau. The displays implements Augmented Reality technology using an app available for iPhone and iPad, allowing fans to take pictures of themselves and their friends in front of the display and simulate the famous transport sequence on the display screen.

On top of the initial two bus shelters, a third display will be made available at the Vulcan Tourism booth at the The Calgary Comic and Entertainment Expo (April 27th-29th), an event that will also host the first reunion of the principle cast of The Next Generation in over two decades in celebration of the shows anniversary.

The displays will be available in Calgary until the end of April, when they will be sent to Vulcan, AB and set as a permanent display in honor of the city’s annual Star Trek celebration, Spock Days (June 8th, 9th, and 10th). There, additional features will be added to the app including guided scavenger hunts and science tours for guests of the celebration.

The current displays are available at the bus stops at 9th Ave﻿/2 Street and 4 street/17 Ave in Calgary.