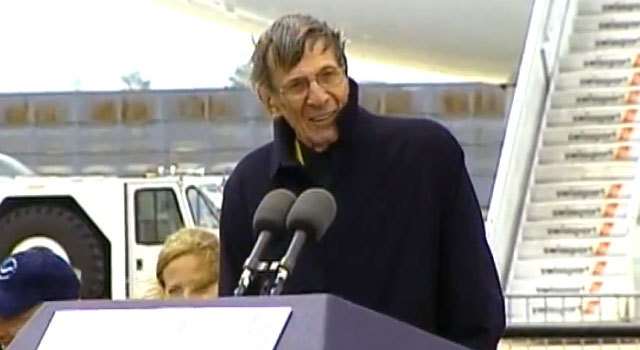 On Friday, the Shuttle Enterprise landed in New York City mounted atop a Boeing 747 jumbo jet at 11:22 AM (EDT), after taking off from Washington D.C. earlier that morning. It was a historic day for science and space exploration: a day that marked the end, in spirit, of the STS (Space Transportation System) program and the beginning of a new type of space exploration vehicle that may one day take us back to the moon and beyond. In attendance for this momentous occasion was none other than Star Trek‘s original Spock, Leonard Nimoy.

Star Trek and the space program have had a long and storied history. Beginning in the mid-1970s, a write-in campaign by Star Trek fans to petitioned President Gerald Ford to rename the prototype space shuttle from Constitution to Enterprise.

When this ship was first built, it was named Constitution. Star Trek fans can be very persuasive. They sent a lot of letters to president Gerald Ford and the president logically decided that the ship should be named after our spaceship Enterprise. 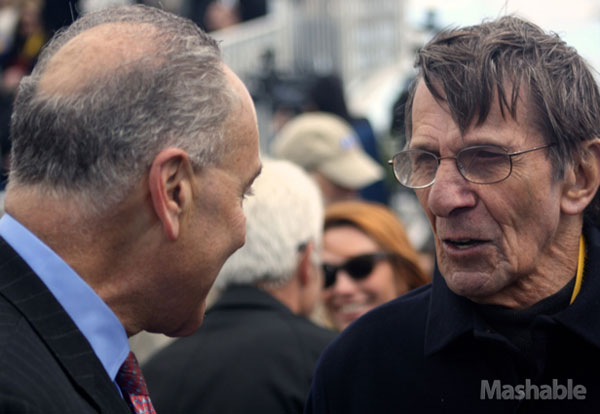 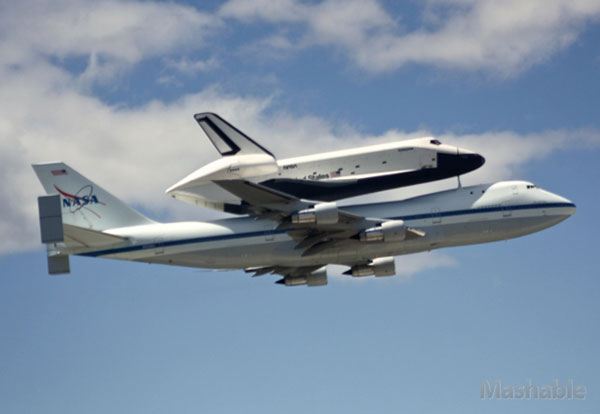 Shuttle Enterprise flys over New York City aboard a Boeing 747

What is so remarkable about the Enterprise is that it was the first space shuttle built by NASA that would determine the fate of all future space flights using the STS design. To our greater relief, astonishment, and most certainly pride, the Enterprise, named after Star Trek’s famed space exploration cruiser both literally and spiritually, did indeed surpass our expectations. With some design improvements and slight modifications, NASA continued to use the STS space shuttles for nearly four decades in scientific discovery and space exploration.

Even more telling of Star Trek’s intimate connection to NASA’s ongoing mission was the fact that Leonard Nimoy, Spock himself, was present at Enterprise’s beginning and end. “This is a reunion for me,” Nimoy said in a speech on Friday discussing the Enterprise’s final landing. “Thirty-five years ago, I met the Enterprise for the first time.” He recalled that his memory of the Enterprise’s departure from the ground on February 15th 1977 was still vivid today as it was when it first took off. Leonard Nimoy bid his final farewell to the legendary craft by offering his famous catchphrase: “Live long and prosper.”

Even Gene Roddenberry himself was present at the Enterprise’s dedication ceremony in 1976. Though he sadly passed away before he could ever see the Enterprise in its final flight to mark the end of the now historic STS program, the famed space shuttle will always stand in memoriam to Rodenberry’s vision of the future and for all of Star Trek.

This is a reunion for me,” Nimoy said during a ceremony on Friday after Enterprise touched down. “Thirty-five years ago, I met the Enterprise for the first time.” 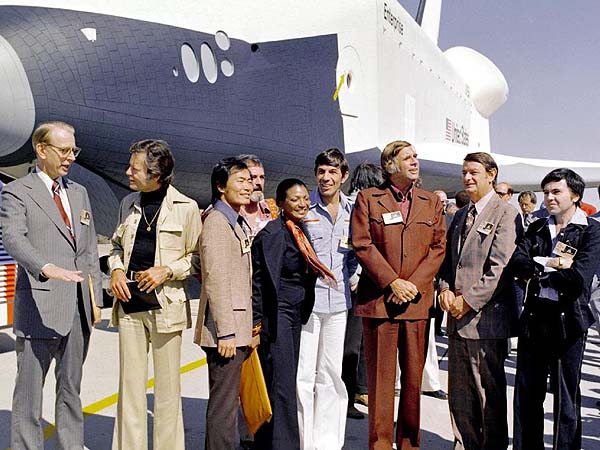 NASA's orbiter Enterprise is greeted by cast members from the Star Trek television series in 1976 at the Palmdale manufacturing facilties. 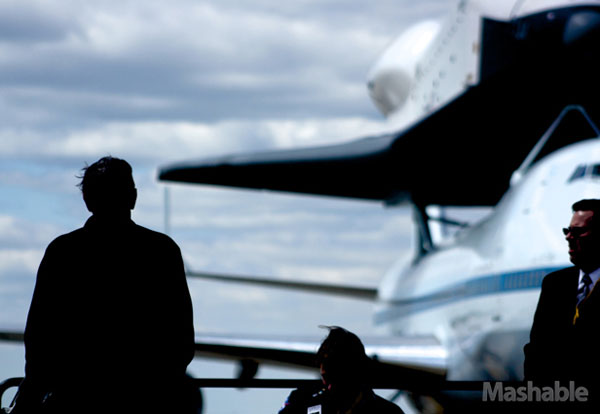 Now, we look to the future, the undiscovered country: a place of unimaginable wonder, beauty, and mystery. To boldy go where no man has gone before. That has always been our motto, and we shall continue to live up to it as we head into space with the new crew exploration vehicle (CEV) design to send humans back into space, back to the moon and hopefully far beyond to finally reach the cold, inhospitable surface of Mars.

Photos and video courtesy of Mashable.