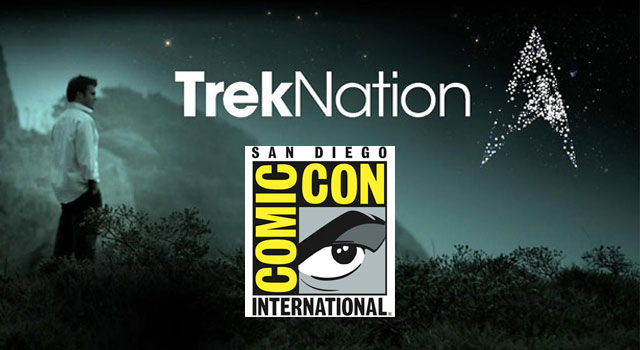 Rod Roddenberry’s Trek Nation will make it’s North American theatrical debut this summer during the annual San Diego Comic-Con on July 12th at the Birch North Park Theatre. The special free screening will be followed by a Q&A session with Roddenberry, where he’ll answer fan’s questions regarding the film and discuss his personal journey in producing it.

While this event is free, space is limited. So be sure to RSVP at treknationmovie.com to reserve your seat.

According to the release, the official DVD will hit store shelves sometime this fall. However, it will be available for advance purchase at the screening and at the Roddenberry booth at Comic-Con.

As we reported previously, Trek Nation made it’s European debut at the Sc-Fi-London event last month, along with Roddenberry Entertainment’s ground-breaking 360-degreefilm, White Room: 02B3.

SAN DIEGO; May 7, 2012 — Roddenberry Entertainment, the successor of the science fiction pioneer that brought television and film audiences Star Trek, announced today that it will be bringing its Saturn Award-nominated film, Trek Nation, to San Diego’s Birch North Park Theatre on July 12 at 7 p.m. This is an opportunity for an exclusive group of sci-fi fans to experience the first showing of the film in this type of environment. Kicking off ComicCon weekend, the 90-minute film will be followed by an intimate question and answer session with Trek Nation Executive Producer Rod Roddenberry.

There is no cost for the event, but only a limited number of tickets are available to those who RSVP through the Trek Nation website, www.treknationmovie.com, beginning May 8 at 9 a.m. PST. Confirmation of each RSVP will guarantee entrance into the theater for the movie showing and Q & A session. Klingons, Borgs and Vulcans are all welcome as, in true Star Trek fashion, fans are encouraged to don their favorite costume or Federation-inspired outfit to express their allegiance during the event.

Through exclusive footage and interviews with devoted fans, including George Lucas, J.J. Abrams, Seth MacFarlane and many notable Star Trek alumni, Trek Nation chronicles a son’s journey to discover his father and the creation that helped define modern-day science fiction.

“By exploring my father through a variety of untapped touchstones, we are able to introduce the world to a Gene Roddenberry it’s never met before. Through this process of humanization, Trek Nation reminds us that none of us are perfect but that within our imperfections lays the potential for greatness,” said Executive Producer Rod Roddenberry.

Since its debut, Rod Roddenberry’s tribute to his father, Gene Roddenberry, has been met with rave reviews, including a nomination from the Academy of Science Fiction, Fantasy & Horror Films for a 2012 Saturn Award.

“The Roddenberry and Star Trek names have an almost unparalleled level of cultural significance,” noted Birch North Park Theatre Executive Director Joe Altbaum. “And with our theater’s history, it’s fitting that we’re tasked with creating the level of experience that’s expected by Roddenberry’s passionate fans by bringing the film to the big screen. We’re honored.”

While Trek Nation won’t be officially released on DVD until the fall, it will be available for advance purchase exclusively at the Roddenberry ComicCon booth and on-site at the Birch North Park Theatre at the July 12th event. Rod Roddenberry will be available to sign purchased DVDs after the Q&A session during a meet-and-greet at West Coast Tavern.