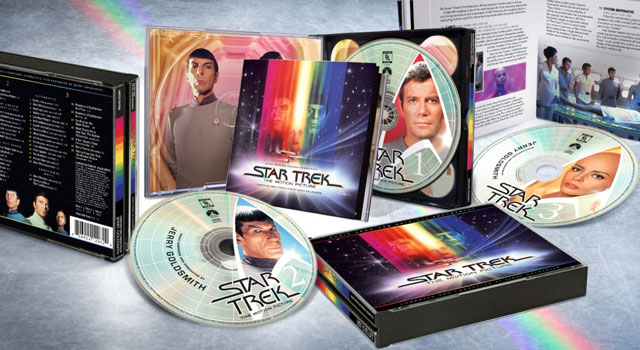 La-La Land Records, Sony Music and Paramount Pictures have prepared quite a treat for Star Trek fans as they reissue a deluxe 3-CD set of 1979‘s Star Trek: The Motion Picture, composed and conducted by Jerry Goldsmith.

To restore and remix the score, Goldsmith’s original scoring engineer Bruce Botnick has used the old analogue 16-track 2-inch sound rolls. Each of the 37 rolls had to “bake” for eight hours in a 110-degree convection oven before they were rolled onto brand new heads and converted to a digital format by John Davis at Precision Audiosonics.

The result is a 3-CD of the epic science fiction soundtrack supplemented by a wealth of bonus material including early cues that Goldsmith rejected before he composed the legendary Star Trek main theme. Disc 1 and 2 include the score for the 1979 theatrical release and Disc 2 ends with the 1979 album program, which was actually performed and edited differently from the film itself. Disc 3 offers 3 additional alternates and a number of bonus tracks such as a collection of early takes of the “Main Title,” Shaun Cassidy’s vocal version of the love theme, “A Star Beyond Time,” and Bob James’ disco cover version of Goldsmith’s theme. Wrapping up this lavish production, the CD packaging features a 40-page full color booklet designed by Jim Titus.

To officially present the CD set, a Star Trek: The Motion Picture Soundtrack Celebration will take place on June 4, 2012, 7:30pm at The Arclight Cinemas in Hollywood. The celebration will include CD soundtrack signing, exclusive audio and video, and a 90-minute panel discussion with performers, producers, and other special guests. As part of the panel, TMP synthesizer performer Craig Huxley demonstrate his famous 18-foot “Blaster Beam” instrument used in Star Trek: The Motion Picture’s score and sound design.

Producer Mike Matessino says that he felt honored to work with the original recordings of one of the greatest scores of all time and that everyone on the team worked on this project with great devotion. Matessino adds: ” The clarity and quality we now have is truly amazing. Thanks to the efforts of La-La Land Records, Sony Music and Paramount Pictures, the end product is an embarrassment of riches and a ‘must-have’ for every film music and Star Trek collection.” 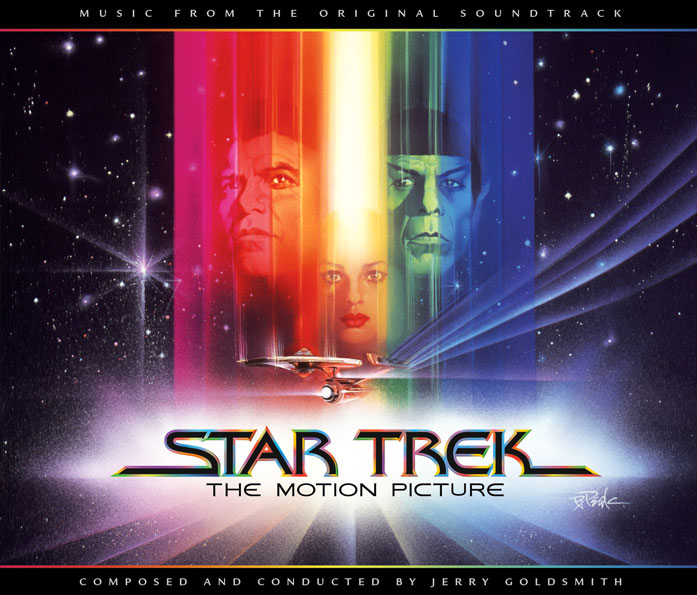 ABOUT THE CD RELEASE:

La-La Land Records, Sony Music and Paramount Pictures boldly go where no soundtrack reissue has gone before with this deluxe 3-CD set of 1979‘s STAR TREK: THE MOTION PICTURE, composed and conducted by Jerry Goldsmith.

“To put together the complete score the decision was to go back to the original Analogue 16-track 2-inch 30 i.p.s. masters,” Botnick explains. “John Davis at Precision Audiosonics baked each of the 37 rolls in a convection oven at 110º for eight hours so that they were playable, then rolled out a marvelous 3M 56 IsoLoop 16-track machine with brand new heads. The tapes were resolved at 60Hz to maintain the original orchestral pitch and sync. The Analogue-to-Digital transfer was done from the 16-track through the latest Black Lion A/D convertors and recorded to Pro Tools X at 192kHz 24-bit.”

This 3-CD set presents the score for the 1979 theatrical release (filling disc 1 and part of disc 2) and also premieres the legendary early “rejected” cues that Goldsmith recorded prior to composing his famous main theme. The 1979 album program (much of which is performed and edited differently as compared to the film) completes disc 2, with disc 3 offering additional alternates (including those heard on the previous Sony expanded release) along with a wealth of bonus material. Among the highlights are a collection of early takes of the “Main Title” (including extensive stage chatter), isolated segments featuring Craig Huxley’s famous “blaster beam” and assorted synthesizer excerpts, the domestic CD debut of Bob James’ disco cover version of Goldsmith’s theme and Shaun Cassidy’s vocal version of the love theme, “A Star Beyond Time.”

“It has been an honor to be able to work with the original recordings of this music and to document its production,” Matessino says. “This is one of the greatest scores of all time and everyone involved took the responsibility very seriously and happily devoted months to see it come together. The clarity and quality we now have is truly amazing. Thanks to the efforts of La-La Land Records, Sony Music and Paramount Pictures, the end product is an embarrassment of riches and a ‘must-have’ for every film music and Star Trek collection.” 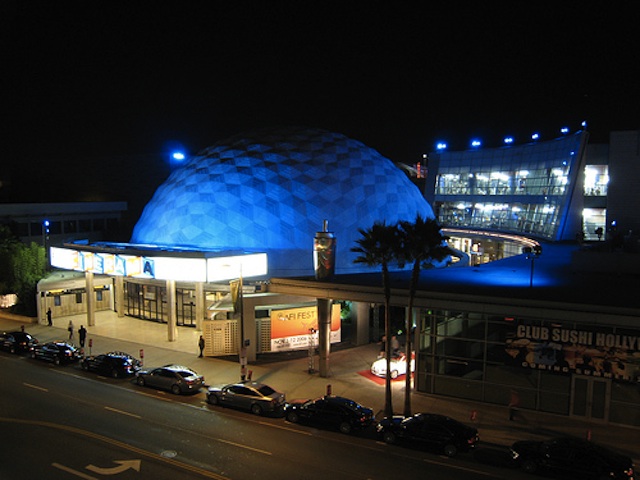 TO THE “STAR TREK: THE MOTION PICTURE” SOUNDTRACK CELEBRATION

Join us in celebrating the release of the all-new, deluxe 3-DISC LIMITED EDITION soundtrack release of Jerry Goldsmith’s “STAR TREK: THE MOTION PICTURE” with a one-of-a-kind, multi-media event featuring:

CD SOUNDTRACK SIGNING (Get your copy of the soundtrack at the event, for a special price, before it’s official release on June 5th!)

A SCREENING OF “STAR TREK: THE MOTION PICTURE – THE DIRECTOR’S EDITON” (DVD source)

Film music writer and author of “The Music of Star Trek” JEFF BOND hosts a live PANEL DISCUSSION/PRESENTATION event that examines one of legendary composer Jerry Goldsmith’s most iconic and esteemed works.

This first-ever live event to focus on Goldsmith’s masterful TMP score will feature exclusive video and audio clips, as well as a rare, live demonstration by CRAIG HUXLEY of his famed “BLASTER BEAM” instrument, used prominently in TMP’s score and sound design.

Get the soundtrack before its general release at the show! STAR TREK: THE MOTION PICTURE (3-CD SET) SOUNDTRACK will be available for purchase at the event for the special price of $30 (cash only).

Then get your CD signed by BRUCE BOTNICK and CRAIG HUXLEY at the event!

After the panel presentation and signing, stay for a SCREENING OF “STAR TREK: THE MOTION PICTURE – THE DIRECTOR’S EDITION.” (DVD source)

ADVANCE EVENT TICKETS ARE $17.50 each and are available for purchase NOW at www.creaturefeatures.com

TICKETS will also be available at the door for $20 each.

The soundtrack will be officially released at www.lalalandrecords.com on Tuesday, June 5, 2012 at 1pm PST.