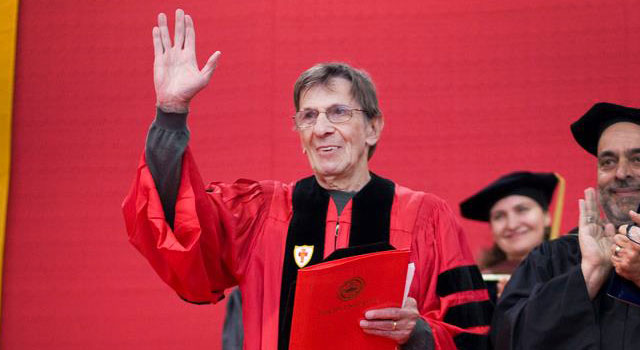 Leonard Nimoy delivered an inspirational convocation address at the Boston University (BU) College of Fine Arts on Sunday. He said when he was asked to speak at this memorable event, by BU President Dr. Brown, the “yes” came back so fast the President may have thought he was “stunned by a phaser” and that refusing the invitation would have been “highly illogical.”

He discussed his life growing up in Boston, including memories of going to sports games, selling newspapers on a windy Arlington Street in the winter, and his Italian and Jewish neighborhood called the “West End.” He said he remains grateful to this day that the city of Boston surrounded him with an environment for academia, the arts and a “powerful wave of immigrant energy.”

Nimoy told the class of 2012 that he first stepped on stage when he was 8 years old at the Elizabeth Peabody playhouse on Charles Street, a community house established to help immigrants find their way into the culture. The establishment had a small space for theater performances and 8-year old Leonard was asked to sing a song, probably, “God Bless America,” and was cast as Hansel in a production of Hansel and Gretel.

Later, when he received his first adult role at the age 17, he thought acting gave a sense of illumination to the audience, and was convinced that if he could do that for the rest of his life, he would be happy. He was fortunate to receive a scholarship from a Jesuit priest at Boston College for the summer where the students worked so hard they sometimes they even fell asleep on stage He then ended up selling vacuum cleaners on Boylston Street in order to save money for theater school in California, but he ultimately dropped out because he was not feeling inspired. He then started looking for work on his own and played a Zombie in a project called “Zombies of the Stratosphere,” an endeavor which may have sunk because of its very title. 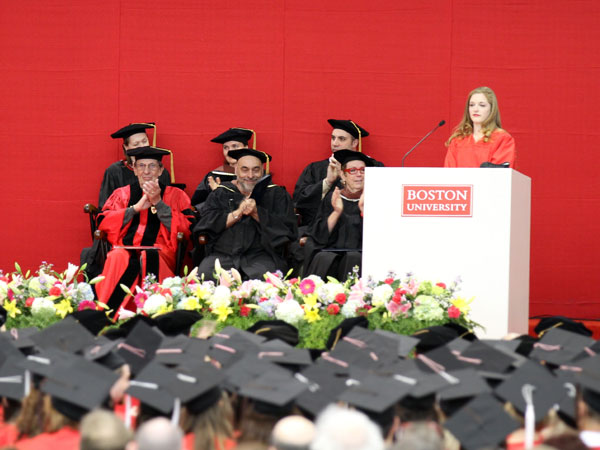 During the years while he was still establishing his career, he worked various jobs, joined the army for two years, and drove a cab at night in order to be available for auditions. As a cab driver, he picked up the future president John Kennedy and after chatting briefly, the two of them agreed that politics and entertainment had a lot, maybe too much, in common. Kennedy then said to Nimoy: “Just remember there is always room for one more good one.”

“Did I really want to put those pointy ears?”

It took 15 years before his famous Mr. Spock role came along but during that time Nimoy found a way to learn more than the craft of theater, but to learn about theme and subtext and about how to add something personal to a role. He admitted to the graduates that the role of Spock was not easy to accept, “ I hesitated. I took my work seriously. Did I really want to put those pointy ears?” Later, he thought that Spock was much like the immigrants from his childhood, a half-human, half-Vulcan alien with a complex inner life, a character that stimulates thought about how we establish our identity and integrity. Spock reminded Nimoy of another quote by John Kennedy, “Art is not a form of propaganda. It is a form of truth.” To Leonard Nimoy, Spock was a form of truth. Art itself, as a form of truth, demands that one walk on a “razor’s edge” between logic and emotion in order to remain truthful, a struggle and a balance that nobody embodies better than Spock. 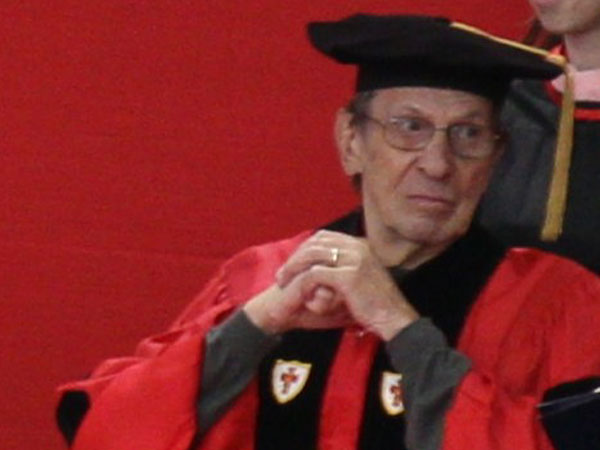 Nimoy shared that after the last season of Star Trek, he rejected other roles that failed to carry the inner complexity and emotional depth of Spock. That’s why he encouraged graduates to try to both find and provide illumination through their art. He also asked them, somewhat in jest, “for the sake of culture, for the sake of mankind, not to create any more reality shows.”

“Since Star Trek went on the air, 46 years ago, I have never been without work.”

In another funny and touching moment during the speech Nimoy pleaded “Scotty, please, beam me out of here.” He then went on to share that, although he never worked drunk or high, he did smoke cigarettes and drink, and he was glad he gave up drinking 23 years ago. He urged graduates to respect their bodies.

In this article:Leonard Nimoy, Star Trek: The Original Series, Video