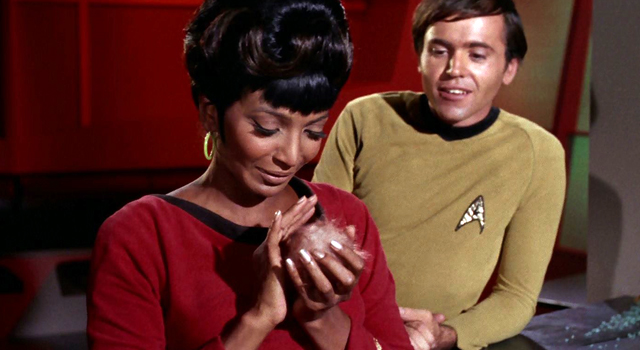 Last week, we discussed the reproductive nature of tribbles and what it implies about their evolution: they likely live in a state of stagnant evolution due to their simplistic biology and reproductive behaviors. Moreover, elucidating their mode of reproduction allows us to emerge on startling new revelations regarding their natural habitats. It may be that tribbles are native to a world so hostile that their extreme reproductive behavior is necessary to avoid extinction among incredible hazards, yet it can, at the same time, threaten its survival. Today, we’ll discuss population dynamics with regards to the tribbles’ mode of reproduction and finally conclude why predation is crucial to achieve an appropriate ecological balance in nature.

The Malthusian Nightmare: How the Tribbles could Destroy an Entire Ecosystem

The only way for nature to favor such an adaptation (that is: to be born pregnant while reproducing asexually) is if the tribbles on their home planet (revealed to be Iota Geminorum IV in the Deep Space Nine episode “Trials and Tribble-ations”) were constantly hunted and that it was their only means of survival. Since any stable (stagnant) population is one in which an individual is able to create a new offspring to replace itself before dying (no net gain or loss in population size), tribbles’ natural reproductive rate of 10 every twelve hours would have to be sufficient to replenish their numbers if 10 individuals were killed every twelve hours per original parent (of course, there’s a lot that should go into making that determination, like life expectancy, which sadly was never revealed on Star Trek). This yields a stagnant population over time, one that neither grows nor falls.

When talking of population dynamics, I must refer to the work of Thomas Malthus, a late 18th century British rationalist who is currently famed for his formulation of the Malthusian Growth Model, which predicts population size given growth rates and environmental pressures. The growth model is an equation adapted from his theories, which states the following:

Given an initial population, Po, a growth rate, r, and a population capacity, M, the final population, P, can be predicted after a given number of generations. The variable, M, is the most important factor to consider; it takes into account the finite amount of resources and the prevalence of any survival threats in the environment that could sustain a population. In other words: M is the maximum number of organisms that could live in a given environment before dying out. Should the population ever exceed or approach this limit too quickly, the species will die out due to uncontrolled resource consumption. 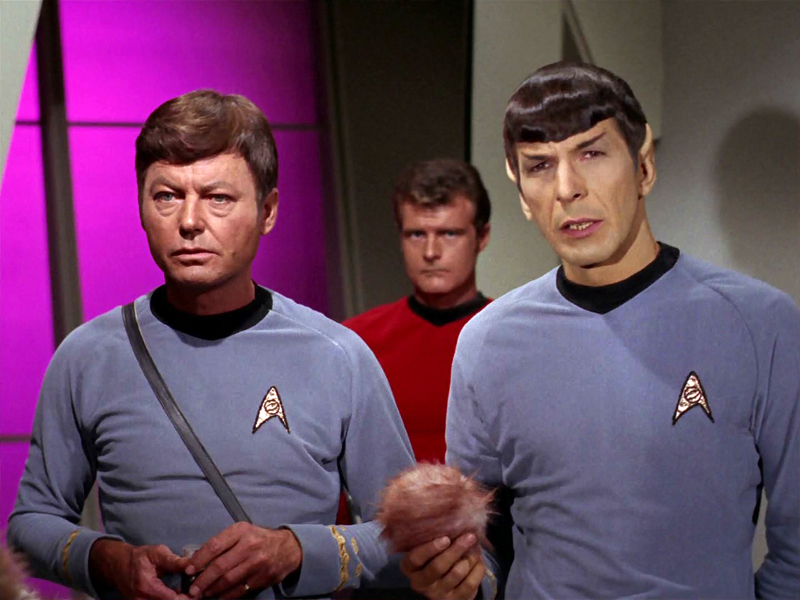 We can plug the known values into their proper variables: where r is equal to 10 for the average number of offspring per tribble and Po is equal to the initial population at the current generation (for simplicity, let’s assume that it’s 1). Accounting for the variable M is where we encounter some serious issues: it was never revealed on Star Trek how high the tribble population has to be before it dies of starvation. Therefore, the assignment of the M variable becomes arbitrary. It gets even worse, unfortunately. In my attempt to ascertain a sufficient population capacity given a growth rate of 10, it appears as though tribbles were destined to breed themselves to extinction! This is a hypothetical scenario termed the “Malthusian Nightmare” in which a population has grown so far beyond its means that it now stands poised to die out. How could a species evolve an adaptation that would eventually cause its extinction and still survive?! The situation gets dire still.

No realistic population capacity could be found that would avert this inevitable extinction. Even at an M value of a googol (10^100, or 1 followed by 100 zeros), the growth model predicts that the tribbles would breed so quickly and so uncontrollably that they eventually consume all natural resources in its environment and die out completely in just 52 days! There probably isn’t enough resources in an entire solar system, let alone a single planet, to support a tribble population for longer than 52 days. This is NOT a stable evolutionary trend to say the least. The answer to this problem isn’t that the tribbles’ home planet houses an infinite supply of resources (which is impossible), but that the effective growth rate is not 10; rather, it is a much lower number. 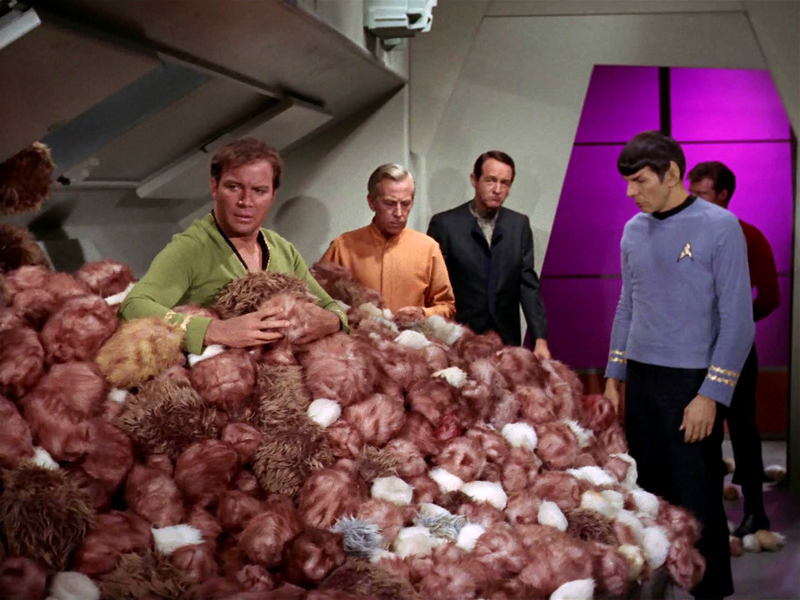 The only way to lower the effective growth rate of a population to a more agreeable, steady value, in any natural habitat, is either with extremely short life-spans (on the order of seconds, rather than days or weeks) or extreme predation. The former isn’t very likely as tribbles do not appear to have short life-spans on the shows, while the latter presents itself as the only logical solution. It means, thusly, that most (at least 70%) of the offspring produced in one generation have to be hunted and killed before they have enough time to reproduce uncontrollably. It is absolutely crucial to eradicate most of the population every 12 hours, otherwise the tribbles would overbreed and consume so many natural resources that it would devastate, not just the tribble population, but the entire ecosystem! 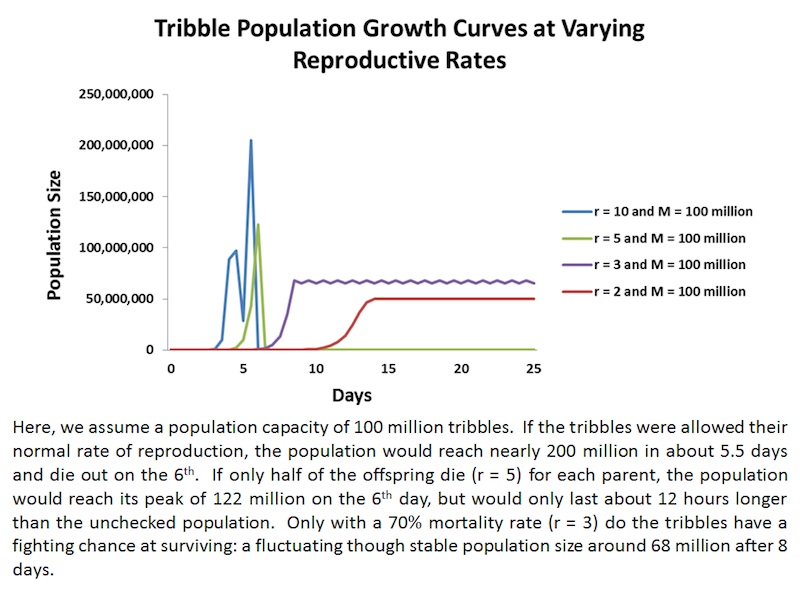 This paints a very grim reality for life as a tribble: they’re born pregnant, they give birth to 10 individuals every twelve hours, they have to consume enough resources to make up for their high metabolism, and most of them die due to predation just in that amount of time. Given the reproductive characteristics of tribbles, one can predict with an appreciable level of certainty that tribbles inhabit an ecological niche among a predominant population of malicious predators that may have to compete aggressively for sustenance and whose survival may also be threatened by limited resources. The emergence of tribbles likely provided these hardened natural hunters with an “easy” means of acquiring food. The niche in this sense is one of a mutually beneficial “arrangement”: the predators can have all the food they want from a species that reproduces rapidly and possess no apparent fight/flight mechanism, and further that the survival of the tribbles in a given environment depends on the eradication of a large majority of their offspring. In a way, the predators are doing the tribbles a favor by hunting them so belligerently. One can certainly appreciate the complexity and beauty of nature’s precious yet fragile ecological cycles.

A Word of Advice to the Klingon Empire

It was revealed on Deep Space Nine by Worf that the Klingons exterminated the entire tribble species and forced it to extinction. Though the use of brute force is not uncanny in Klingon culture as a means to resolve problems, it was perhaps overkill to deal with their Public Enemy Number 1 in such a brutal manner. Considering the delicate balance between tribbles and their ecosystem, it would have just been easier and less of a headache to kill off their major predators. It would allow tribbles the unrestrained means to reproduce, consume every available resource, and eventually die out all on their own. You don’t even need to harm a single tribble in the process (I know that’s hard for you to do, but please try to refrain). To any Klingons out there, just as a word of advice, if you want to get a problem fixed: trust in science and reason. There’s always a better way…whether you do it peacefully or not is your choice.