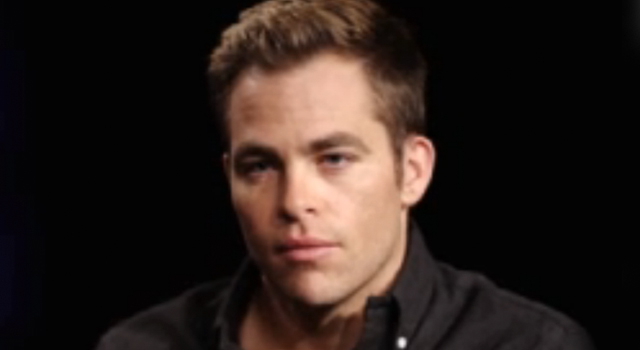 While promoting his new film People Like Us, Star Trek‘s new Captain Kirk, Chris Pine discussed the evolution of his Kirk character and how he’s changed since the 2009 film with MTV News.

Scroll down for the video.

“There is so much happening in their script. I can’t say much of anything,” Pine told MTV News during the interview. “They come from TV land, all of them: J.J., Bob, Alex and Damon. They’ve worked together in the highest-pressure situation in television for years. That machine is well-oiled.”

“What you also get in that circumstance is it’s a constantly evolving beast — the script, the material, how it’s going to look, how J.J.’s going to shoot it,” he said. “There is nothing set in stone, which is tremendously frightening, but also extremely exhilarating, especially when it’s like a finely tuned racecar. They just know how to do it. In this constantly evolution, the script that they had written kept getting better and better.”

“What they’re so good at is this kind of mythic reinvention. They’re really good at writing myth, and these characters — I think what people will find with everybody — is that these characters go on mythic arcs,” Pine said. “It’s all about growing up. These are young men and young women, and they are not the crew that we know from the series. They’re developing into that. It’s a long way to go there.”

“It is structured so that the antagonist brings out all of the qualities in Kirk that need to happen in order for Kirk to grow,” Pine said. “As you know from Benedict, just watching him, vocally, he’s fascinating. He’s got this deep resonate voice. He’s a fascinating face. He’s a lovely guy and just super smart. You want to see something firing in his brain, so he’s not just a blood-dripping-from-the-fangs bad guy. Benedict brings those kinds of smarts.”