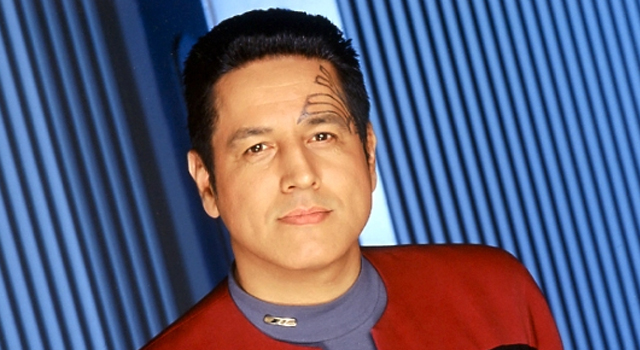 Robert Beltran portrayed Chakotay for all seven season of Star Trek: Voyager. While on Voyager, Beltran, spoke out publicly about his displeasure of how his character was used. He is considered by many to be one of the Star Trek‘s most polarizing characters. He aired his complaints so often, many thought he was intentionally trying to get himself kicked off the show.

Beltran, now 58, is set to appear at next month’s Official Star Trek Convention in Las Vegas. Leading up to that rare appearance, StarTrek.com discussed the Chakotay character with him and his thoughts on Voyager, which has now been off the air for over a decade.

Beltran talked about being cast in the role of Chakotay and his initial hopes for the characters evolution.

My agent asked me if I was interested in going in to audition for the role. I read the “Caretaker” script, although I had no idea no idea of Star Trek. I didn’t know Star Trek from anything. But I liked “The Caretaker” script and the role of Chakotay. So I said, “Yes, I will be happy to go in and audition.” I did, and I got the role. When I was telling friends and family what my new gig was going to be, I was amazed by the response that I got. “You’re going to be on Star Trek! You’re the commander! You’re going to be on the bridge! You’re going to run into this! There’s the Borg! You’re going to die and they’re going to bring you back!’ Everyone knew a lot more than I did. I had no idea what I was getting into. All I knew was that I was going to do this pilot, this two-hour pilot. I had no idea if it was going to go to series. Of course, when you do a pilot you’re obligated to sign up for five years in case it goes to series. And, blah, blah, blah. We did the pilot, we got picked up, and we did seven years. I was pleasantly surprised at what it was all about. Some things, I didn’t like, but there are things I don’t like in every gig that I’ve ever done.

“I’m just kind of a blunt person and, because I have brain, I can see problems and so I’m vocal about them.”

He went on to discuss what he thought worked and what didn’t about the Chakotay character.

Beltran’s honesty and candor speaking out against Voyager‘s writing and how little Chakotay was used on the show is still a hot topic among Star Trek fans today. He went on to talk about the reaction to some of those comments by the show’s writers and producers.

During the Michael Piller-Jeri Taylor years, they listened intently. It was after that… I guess when Brannon Braga took over, when the Seven of Nine character made her entrance, the focus changed. That was fine with me. That was fine with me, but I think writers have an obligation to fill out all the characters if they’re regular characters on a series. I think several of the characters were diminished – Chakotay and Tuvok and Kim and Neelix. I think it was just easier for these new writers that came on to write stories about the captain and about characters that weren’t really human, like Seven of Nine and the Doctor. Those three characters were kind of all-seeing, all-knowing, omnipotent, and I think a lot of the tension and drama that was available was lost because you have to really dig hard to find tension in all-knowing, all-seeing characters. They know everything, right? They have all the answers. Or else you have a redundancy of the same scene written over and over and over again, with slight variations. 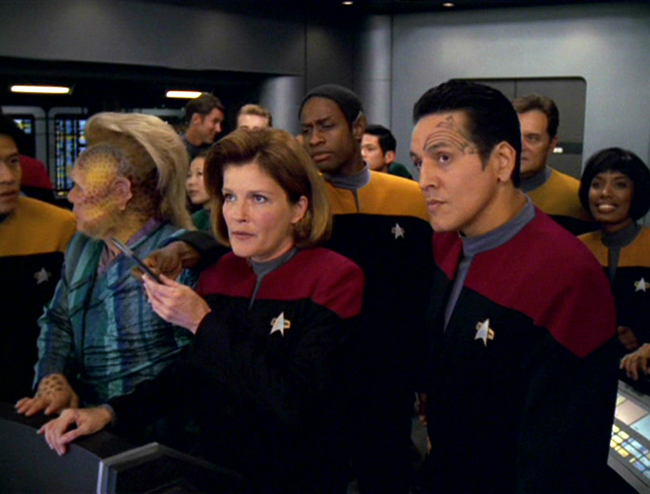 Robert Beltran and the cast of Star Trek: Voyager

Speaking out against a show that you’re a part of can potentially cause many complications in a workplace. Beltran discussed how his vocal displeasure affected his relationships with the cast and crew.

I don’t know what the effect was. I’m just kind of a blunt person and, because I have brain, I can see problems and so I’m vocal about them. I think a lot of the actors were feeling the same way, but for me it was like, “OK, you can fire me if you want to. Go ahead, and I’ll leave.” That gave me a certain amount of freedom. I was single at the time. I didn’t have to worry about a family like everybody else on the show, except maybe Garrett [Wang]. I felt like I was telling the truth, and if people can’t take the truth, that’s fine with me, but I’m not going to be stifled by the prospect of being fired.