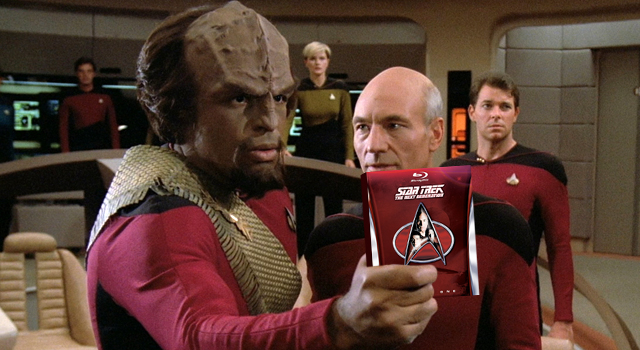 25 years after it originally aired, the first season of Star Trek: The Next Generation is available today on Blu-ray. The six-disc set features all 25 first season episodes, which have been completely remastered in high-definition with a DTS Surround audio track.

The contents of the box set includes:

Disc 1: Encounter at Farpoint Parts 1 & 2, The Naked Now, Code of Honor
Disc 2: The Last Outpost, Where No One Has Gone Before, Lonely Among Us, Justice
Disc 3: The Battle, Hide and Q, Haven, The Big Goodbye
Disc 4: DataLore, Angel One, 11001001, Too Short a Season
Disc 5: When the Bough Breaks, Home Soil, Coming of Age, Heart of Glory
Disc 6: The Arsenal of Freedom, Symbiosis, Skin of Evil, We’ll Always Have Paris
Disc 7: Conspiracy, The Neutral Zone, Special Features

Star Trek: The Next Generation – Season 1 on Blu-ray is currently available on Amazon for $59.99.

If you somehow haven’t seen it yet, watch the season 1 trailer below.