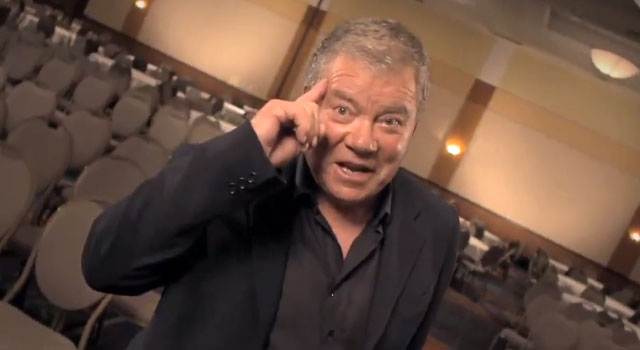 William Shatner’s latest project, a documentary film called Get A Life! premiers on the EPIX channel and the EpixHD.com website this Saturday, July 28th at 8pm ET.

As we’ve previously reported, the documentary examines Star Trek‘s cultural impact along with some of it’s — at times — obsessive fans. Filmed primarily at the 2011 Las Vegas Star Trek convention, the film features interviews with convention goers and delves deeply into the fandom that surrounds the franchise.

On Saturday, the video will be available on the EPIX website at https://www.epixhd.com/william-shatners-get-a-life/.

Based on Shatner’s hugely popular book (in response to his now infamous skit on SNL), this film examines the mystery, longevity and the cultural phenomena of Star Trek and its long-obsessed fans known as “Trekkers.” On the surface, the film is an exploration of strangers who have for years attended conventions which looked foolish and almost laughable to some – but Shatner discovers the many secrets and hidden motives behind these individuals’ compulsion to attend these events. The end result is a film that reveals a fun and touching side of the fanfare surrounding Star Trek, and examines the thrill of what’s happening at these fantasy conventions and the enduring popularity of the film and TV series as Shatner further embraces his role as Captain James T. Kirk and his own impact.

Watch the opening scene below.

In this article:Epix, Video, William Shatner