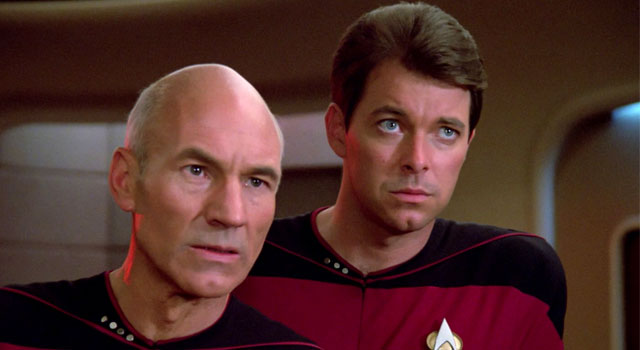 Less than a week after Star Trek: The Next Generation‘s first season was released on Blu-ray, CBS has issued a statement regarding the audio issues which some consumers have reported.

The issue, according to CBS, is a problem with the 7.1 and 5.1 DTS Master Audio track on discs 1, 3 and 4. CBS is offering free replacement discs to those consumers affected by the audio mastering issue.

For details on the replacement program, CBS is asking consumers to email phe.stng@bydeluxe.com for more information.

We have discovered an anomaly in the English 7.1 DTS Master Audio track in our Star Trek: The Next Generation Season 1 Blu-ray Box set. There are some episodes that inadvertently had their front channel designations incorrectly mapped, resulting in an undesired playback experience when listening to them in a 7.1 or 5.1 Surround Sound environment.

We are quickly working to remedy the situation. Replacement discs (Disc 1, 3 and 4) will be made available free of charge. Please email phe.stng@bydeluxe.com for details regarding the replacement program. You may also call 877-DELUXE6 (877-335-8936) between 8am to 6pm Pacific, Monday-Friday.

We strive to provide our fans the best Blu-ray experience possible and sincerely apologize for this inconvenience.