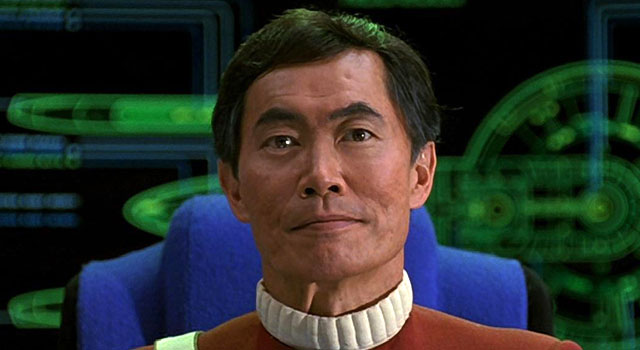 One may think that no film experience could possibly beat playing Captain Kirk’s helmsman in the original Star Trek series, but actor George Takei, known to the fans as Mr. Sulu, proves us wrong by becoming the subject of a documentary about his own life. Takei, who spent four years during his childhood in a Japanese American internment camp, has become an activist for marriage equality since he “came out” in 2005. As part of his activist efforts, he has compared the experience of Japanese Americans during WWII with the civil rights struggles of LGBT people.

In the film, Takei takes us through his life journey from being a Star Trek icon to becoming a civil rights activist, while shedding light on the personal struggle he endured before “coming out” at age 68 when California’s struggle for LGBT civil rights not only compelled him to reveal a personal secret but also to advocate for the cause in public.

The documentary features interviews with Takei and his family, including his partner of 25 years Brad Altman, whom Takei married in 2008. Other interviews include fellow Star Trek legends William Shatner and Leonard Nimoy, as well as Howard Stern, whose satellite radio program has won the actor new fans through Takei’s participation as an announcer.

“They’ve known George was gay longer than he’s been out in the media,” Kroot explains.

“Senator Inouye has known George Takei for more than a decade,” confirms Peter Boylan, Inouye’s deputy chief of staff. “The Senator considers George a colleague and a friend,” he adds.

So I have seen them interact together,” Kroot shares — as well as stand-alone interviews with Inouye and Mineta. Mineta mostly discusses the internment camp experience, while Inouye talks about LGBT civil rights. 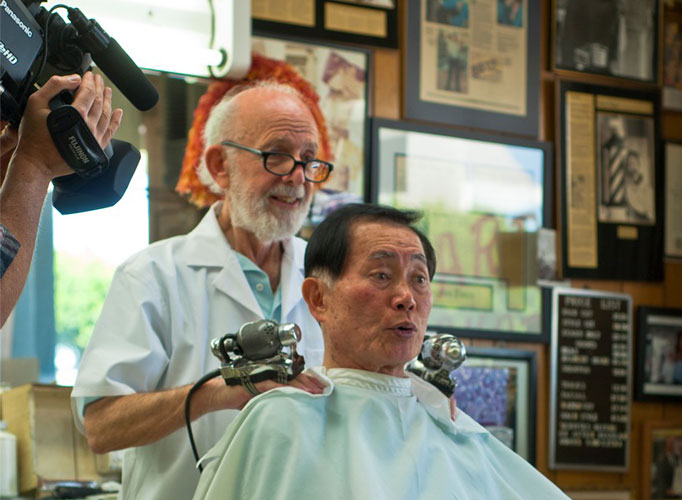 Takei getting a haircut in LA. Photo: Patrick Siemer

The estimated completion date of the film, which received grants from The Creative Work Fund, The California Civil Liberties Public Education Program, the Frameline Completion Fund and the Pacific Pioneer Fund, is 2013.Kroot has worked on this project for about two years now and is still hoping to include an interview with another Star Trek celebrity, Walter Koenig (Pavel Chekov).

This film may not take place on the historic set of the “Enterprise” but it certainly promises to reveal an inspiring real life truth about one of Star Trek’s pioneers’ deepest struggles. Takei discusses these struggles with humility, humor and wisdom that may even remind Trekkies of his Star Trek persona.

This is the definitive documentary portrait of actor and activist George Takei.

Most people know George Takei as Mr. Sulu, the helmsman from the original STAR TREK television show and movies. Fewer people know that George was imprisoned for four years during his childhood in a Japanese American internment camp. In his activism, he equates the experience of Japanese Americans during WWII with the civil rights struggles that LGBT people face today. In 2005, after a lifetime of being “closeted” George “came out” publicly so that he could participate in the struggle for marriage equality.

The film chronicles George’s rise to fame, and how he went from a STAR TREK celebrity to becoming an active voice in civil rights. George’s personal struggles with keeping his homosexuality a secret are recounted. But, it was ultimately George’s priority and commitment to civil rights that compelled him to “come out” at age 68. Prompted by California’s struggle for marriage equality, George used this opportunity to advocate for the cause by publicly announcing himself as a gay man in the media, and in 2008, he legally married his male partner of 25 years, Brad Altman.

Also included in the film are perspectives and interviews of George’s friends, peers and admirers. Finally, the film will feature George’s equally engaging husband, Brad. George and Brad have become the poster-couple for same-sex-marriage and an example of grace under fire.

In his own words George navigates us through his life story – past and present. By recognizing the political and historical landscape of George’s life journey, and contextualizing the events that shaped his life and propelled him to boldly go where no man has gone before. The film aims to give an intimate account of a man who has broken barriers through courage, honesty and humor, but who only recently embraced his own truth.

Beyond his celebrity as a “Star Trek” icon, George Takei is an activist utilizing his grace and humor to bridge galactic social and political divides.

This film is currently in production. The estimated completion date is summer 2013.

For more information, visit the website for the George Takei documentary.