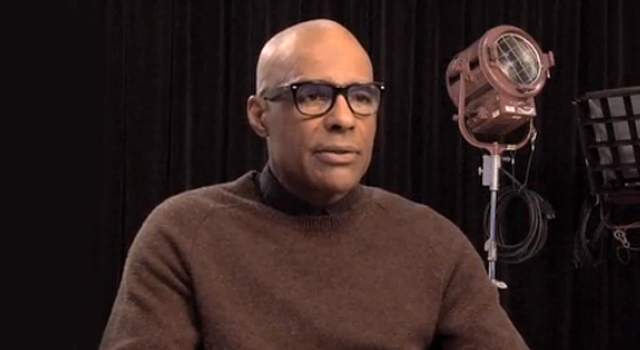 Michael Dorn, who has appeared in more episodes of Star Trek than any other actor, is asking fans for their support as he attempts to get a new romantic comedy project off the ground.

As we first reported in July, Dorn has cast some of his former co-stars from both “The Next Generation” and “Deep Space Nine,” including Marina Sirtis, Armin Shimerman and Nana Visitor for the project, called “Through the Fire.”

Those who help fund the film will receive a variety of rewards, dependent on if the project’s goal amount is attained along with the amount of their pledge. Some of the rewards include a digital copy of the film once it’s been completed, “Through the Fire” t-shirts and hoodies, a TNG pinball game owned by Dorn, a “producer” credit and several more. For a complete breakdown, visit the Kickstarter page.

Scroll down to watch Dorn explain the project.

“Through The Fire” is a romantic comedy about a couple of dazzling New York urbanites who are set-up on the worst blind date ever, only to find out they have more in common than they realize. Despite their professional differences (she is an acclaimed Broadway actress and he is the theater critic who gave her a horrible review) they cannot get each other out of their minds. “Through The Fire” shows what happens in the ultimate battle between the head and the heart.

I am making this movie, along with several of my friends from Star Trek, because we want to get back to the craft of filmmaking. Our formula is simple…. great script, great actors, great crew, and great directing, equals great profitability.

We also want to show the the people who run Hollywood that “sci-fi” fans are not only interested in science fiction, but are multidimensional and a force to be reckoned with.

Directing this movie means “Freedom” for me. All I’ve ever wanted from the beginning is to have the artistic freedom to choose the projects that speak to me and this is my chance. Why Kickstarter? I love the Internet. It’s one of the most useful tools ever invented and we are just starting to see the potential for artists to get their projects directly out to the people. Your help will make this movie a reality and everything you pledge will go straight to toward that goal.

Like Worf, the character I have played for so many years, I have always had a strong “logical/rebellious” or “Logibellious” streak in me. From an early age people have told me what I can and can’t do. It was nothing malicious, but my logical mind would look around and see examples of other individuals doing exactly what I was told couldn’t be done. I had to ask my favorite question… “Why?”

My favorite answer is “Why not?” Without exception, this has led to great success.

From the film “Field of Dreams,” “If you build it, they will come.” Together, let’s make this dream a reality.

To donate to the project, visit the official Kickstarter page.