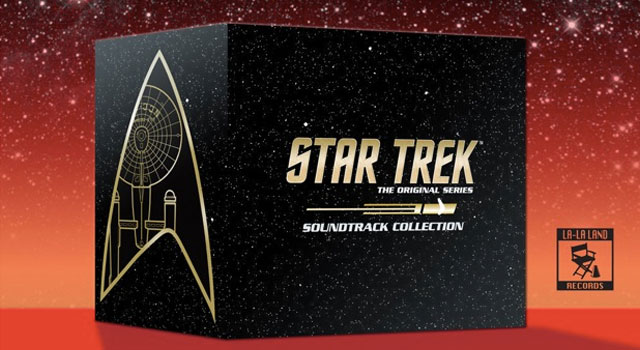 Last week, at the Las Vegas Star Trek convention, La-La Land Records announced the forthcoming release of a 15-disc Star Trek: The Original Series music box set. Scheduled for release in late fall 2012, the set will include scores from every episode of TOS, many of which have never been previously released. The set will come packaged in a hardcover slipcase with a 100-page booklet, featuring in-depth liner notes.

“For 45 years, those like me who love this music could only dream about having it all,” said album producer Lukas Kendall. “This is the major, historical piece of sci-fi music, television music and pop culture music that we have always wanted to release in a definitive form for the collector.”

Watch a behind-the-scenes video covering the production of the set below.

Burbank, CA — La-La Land Records proudly announces its forthcoming release of STAR TREK: THE ORIGINAL SERIES SOUNDTRACK COLLECTION, a limited edition 15-CD box set, showcasing all episode scores as heard in all three original seasons of the landmark sci-fi television series STAR TREK (1966-1969). This special collection of ground-breaking, iconic music, from one of television’s most acclaimed and beloved series, has been newly remastered from studio elements and features hours of stellar material previously unreleased in any format.

The collection is expected to be released in late fall 2012. It will be a limited pressing, but the total number of units to be manufactured has yet to be determined. You can help the label decide how many units will ultimately be pressed by visiting www.lalalandrecords.com now and signing up for the STAR TREK: THE ORIGINAL SERIES SOUNDTRACK COLLECTION MAILING LIST.

STAR TREK: THE ORIGINAL SERIES SOUNDTRACK COLLECTION is licensed by CBS Consumer Products and produced in cooperation with GNP Crescendo Records, the longtime home of pioneering classic Star Trek television and film soundtracks. GNP Crescendo’s Neil Norman has allowed for episode scores previously and exclusively released by Crescendo to be newly expanded and remastered for this box set, in order to make the collection as comprehensive as possible.

This release marks the kind of authoritative collection of original Trek series music that fans have desired for decades. “For 45 years, those like me who love this music could only dream about having it all,” remarks album producer Lukas Kendall. “This is the major, historical piece of sci-fi music, television music and pop culture music that we have always wanted to release in a definitive form for the collector.”

“A majority of the music featured in this set has never been released,” adds Executive Album Producer and La-La Land Records President MV Gerhard. “Of that unreleased music, there is a fairly large percentage that no one has ever heard because it was written and recorded for the show, but never featured in the episodes.” Regarding some of these previously unreleased tracks, Album Music Editor Neil S. Bulk comments, “No original music from season three, apart from the main title, has ever been released. It’s really distinct and definitely Star Trek… It’s what people have always wanted.”

“The original show was very theatrical,” says Trek historian and liner notes writer Jeff Bond. “So the music reflected that. It was huge and very expressive and thematic. And that makes it very exciting to listen to apart from the show.”

The original Trek series scores team with action, adventure and drama, but they are also infused with deep emotion and the greatness of the human spirit. Such characteristics have kept these richly orchestrated tracks vital and relevant decades beyond their original recording. “Trek was always about the human condition,” remarks Co-Executive Album Producer and La-La Land Records VP, Matt Verboys. “And the scores have that in it and I think that’s what has made both the show and its music timeless.”