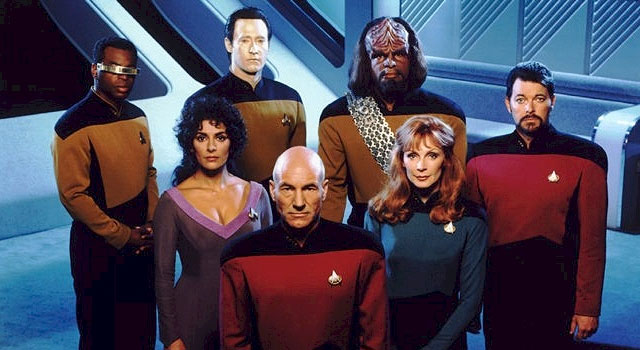 Wizard World has announced a ‘Star Trek: The Next Generation’ cast reunion for the upcoming Austin Comic Con. In celebration of the 25th anniversary of the series, Patrick Stewart, Jonathan Frakes, Brent Spiner, LeVar Burton, Michael Dorn, Gates McFadden and Marina Sirtis will appear together on stage at the October event. This will mark the first time the seven main cast members will reunite in the United States, after a previous Canadian reunion earlier this year at the Calgary Expo.

NEW YORK and AUSTIN, August 15, 2012 – Seven stars of the popular series “Star Trek: The Next Generation” will gather for their first 25-year U.S. reunion at Wizard World Austin Comic Con, Oct. 26-28, 2012, at the Austin Convention Center. All seven of the main stars are scheduled to attend, including the legendary Patrick Stewart, who portrayed the stern, determined Captain Jean-Luc Picard, commander of the USS Enterprise.

Wizard World Austin Comic Con, produced by Wizard World, Inc. (WIZD.PK), will bring together thousands of fans of all ages to celebrate the best in pop-fi, pop culture, movies, graphic novels, comics, toys, video gaming, television, sci-fi, gaming, original art, collectibles, contests and more. Admission is free for kids 10 and under, and Sunday, October 28 is “Kids Day,” with an array of programming specially designed for children.

In this article:Star Trek: The Next Generation, Wizard World