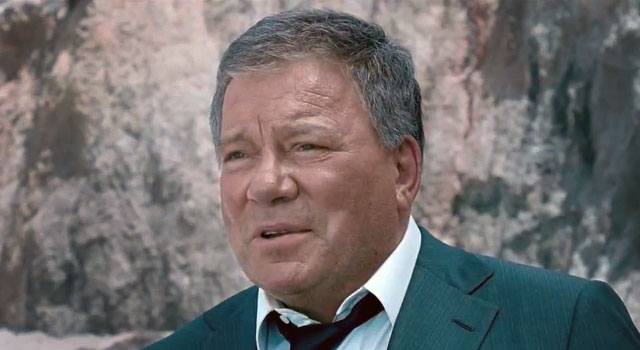 William Shatner’s “Priceline Negotiator” has returned. The popular Priceline.com character was thought to be dead after the company had apparently killed him off in January, when a commercial aired depicting the Negotiator falling from the top of a cliff.

Priceline will debut a new TV and web commercial on Thursday, which will explain where Shatner’s character has been.

“We had such a positive response to the ad where we appeared to throw him over a cliff that we wanted to find a creative way to bring him back,” said Brett Keller, chief marketing officer for Priceline.com.

On Wednesday, Shatner tweeted the following regarding the character’s return.

Seven months after a commercial showed the Negotiator plunging off a cliff and into apparent oblivion, the company is resurrecting him in a new 30-second TV and online spot set to debut Thursday.

A clever parody of a world-weary spy who vanishes to start a new life, the commercial opens with Shatner standing on a beach, gazing somberly at the ocean. A company man (actor Allan Louis) approaches him.

“You’ve been busy for a dead man,” he tells Shatner. “After you jumped ship in Bangkok, I thought I’d lost you.”

“Surfing is my life now,” replies Shatner, who is formally dressed in a business suit, shirt and tie. But his pants legs are rolled up and he’s got a surfboard tucked under his arm.

The Negotiator, ignoring entreaties to resume work, neatly manages a Priceline plug (“even faster, easier ways to save money” on travel) before dashing toward the Malibu waves.

Turns out Priceline just couldn’t do without him.

“We had such a positive response to the ad where we appeared to throw him over a cliff that we wanted to find a creative way to bring him back,” said Brett Keller, chief marketing officer for Priceline.com.

When last seen, the Negotiator was rescuing vacationers from a bus teetering on a bridge’s railing. “Save yourselves – some money,” he said, handing off his cellphone as he and the bus tumble into a dry creek bed. A violent explosion followed.

When the spot first aired in January, the company didn’t know if or how the Negotiator would return, and neither did Shatner, Keller said.

The new ad from the Butler, Shine, Stern & Partners agency doesn’t address how the Negotiator survived, but Shatner, 81, offers his preferred fantasy: “A beautiful girl gave me mouth-to-mouth resuscitation.”

Whatever it took, the new ad reverses a flawed decision to throw the Negotiator under the bus, according to Shatner. He’s played the pitchman for six years and has done Priceline spots for about 14 in all.

“I knew it was a mistake, absolutely,” he said.

Sealey had granted Priceline leeway when it gave the Negotiator the heave-ho. He reasoned that the company was changing its business model from “a name-your-price model to a fixed-price approach,” and the pitchman seemed to speak to the past.

In retrospect, Sealey said, “You don’t give up equity like Priceline had in Shatner. … It’s like Aflac giving up the duck or Progressive (insurance) giving up Flo,” he said. Shatner’s return “won’t correct a bad earning report, but it is the right move.”

Last Wednesday, Priceline.com Inc.’s stock fell more than $100, about 17 percent, after the company warned investors that its third-quarter revenue and income would come in far below analysts’ forecasts because of the deepening malaise in Europe, a burden shared by other companies.

Another blow came Monday: Shares of Priceline and other online travel companies fell after Google announced the acquisition of the Frommer’s brand of travel guides, beefing up Google’s array of travel search and review assets.

Cue Shatner, who as the valiant Capt. James T. Kirk of the “Star Trek” TV and movie franchise knows what it’s like to play the hero. Nothing wrong with doing so in a commercial, he said.

“There’s a certain pride in making a character in advertising a popular character,” he said. “You could look at it as an achievement.”