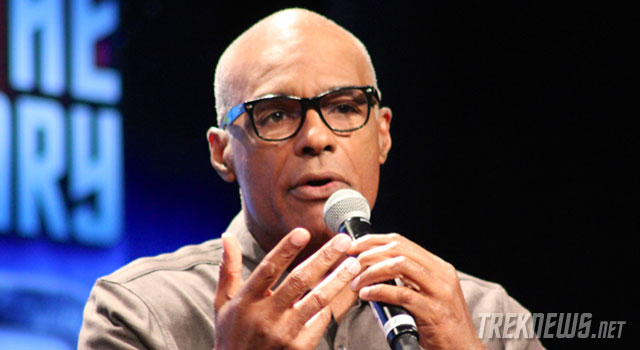 In part one of our exclusive interview with Michael Dorn, he discussed his early impressions of his Next Generation costars, whether it was difficult to immerse himself within the cast of Deep Space Nine, and an update on his proposed Star Trek mini-series. Today, we continue that interview with part two. In it, Dorn talks about his new romantic comedy, Through the Fire, the evolution of Worf’s look, and if he’d be interested in appearing as Worf on television once again.

Your latest project, ‘Through the Fire’ is something you seem very passionate and interested in talking about. What can you tell us about the film?

Dorn: Its not a science-fiction movie. It’s a romantic comedy that my partner and I, Anne-Marie Johnson, my partner this project, she and I wrote it a few years ago and it never died, basically. Every couple of years somebody would read it and say “Michael, I really want to be involved in this. Lets start it up again.” It would always get to a point where it got really close and then something would happen, as happens in the business. This latest hinge is that somebody clued me in on Kickstarter. I went on to get started and I watched all these things and I said “This is not a bad idea,”.

I love technology and the internet and I love what it’s doing to our business because once again its opening up a lot of avenues that some people would not be able to travel. So we were very ambitious about it but twofold, I wanted to see what kind of response Star Trek fans would give to a seeing their beloved science-fiction characters in a non science-fiction role. To me it was worth the effort to see how they’d react. Also, I didn’t want to go through the studio system, because I wanted to do it on my own, just a small movie, with my friends, with a bunch of script changes every day and twenty people telling you whats funny and whats not funny. It sort pointed me to the direction of Kickstarter. We’ve been on for three weeks and we are doing very well. We still have three weeks to go and we are hoping that our little pitches will reach another audience.

It’s happened with a couple of items, not with us, but with other Kickstarter projects, where a guy has a video game and he needed $25,000 and he got $1.2 million and this girl in Australia was a little singer/songwriter and she put this small little video on there and she got a huge amount of money. There are all these stories, so I said “Let’s see, test the waters, let’s see what can happen,”. So we took time did a nice video. We had some help with that and we put it on there. The one thing I do know is that there’s a lot of rich Star Trek fans out there, because the big items have gone quickly. So we’re going to see what happens. From that, it’s a learning experience and we’ll see, if we get the money, which it looks like we’re going to, then great and if we fall short then we’ll have an idea of what our next move is going to be. So its kind of a win-win situation for me. 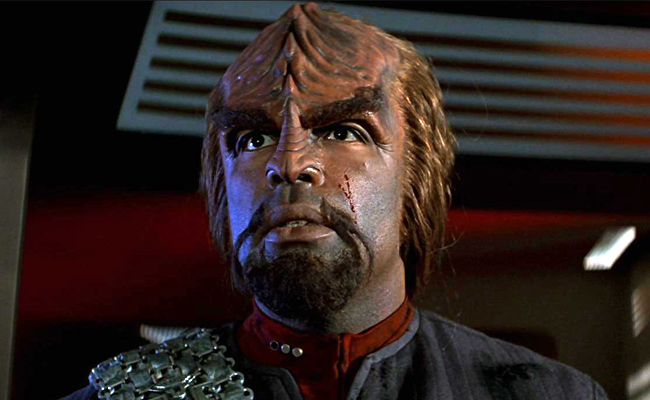 You mentioned the project will potentially be funded through Kickstarter, where fans can donate to help get the film made. Can you tell us a little about how that works and what some of the incentives are for donors?

The incentives go from five dollars to $50,000 or $100,000. For us the small items are autographed pictures, which our fans come to the conventions to get all the time. Then, it goes up to a credit in the movie, then there’s this Star Trek: The Next Generation pin ball machine, then there’s an invitation to actually have a part in the movie and be at the premier. After that, I think there’s one to join Marina Sirtis and I at a Star Trek convention and be our guest, dinner, be on stage with us, the whole thing, be introduced, which went very quickly also.

You mentioned Marina, you also have Nana Visitor,  Armin Shimerman and Kitty Swink from Star Trek, set to be a part of the film, what can you tell us a little about the characters they would play?

Dorn: Marina plays my best friend, which is kind of apropos, because she is my best friend in real life and she’s trying to get me married off and she has run out of people. She’s at the last straw, which is the worst idea she has ever had, to introduce me to a theatre actress and I’m a theatre critic. So, that doesn’t bode well. She’s sort of like the wise, although mean at times, best friend.

Kitty and Armin, there’s a scene that I love where after we’ve gotten together, we’ve had this wonderful relationship, we break up and I go into, like most guys, and I go into a denial about it. Like “Ah. Who cares? I don’t care. I’m done.” But, we see that it’s really affecting him. So how it affects him is that he starts writing these really good reviews of these really terrible plays. She’s kind of turned him from being this kind of big acidic critic into this fluffy Santa Claus. He doesn’t believe it. So he goes to a play and Armin and Kitty are on stage and they are doing their scenes, I wont tell you what happens but that’s their part. It’s not just a cameo because we’re going to film it so that we see them on stage and they hear something and they’re still saying their lines, they’re still in the play but they are looking at each other and looking out at the audience trying not to break.

Nana Visitor is playing a character that’s based on another friend of mine, who’s an interior decorator, but she is truly acerbic and doesn’t suffer fools lightly and smokes and drinks Starbucks coffee like its going out of style. When we wrote this and finally expanded it to a movie, we were looking for people that we knew, that could be in the movie, because we wanted to work with our friends, but as it turns out these people are Star trek people that we said ‘Wow, they’d be perfect for it!’.

Aside from the opportunity to both act alongside and direct some of your former Star Trek castmates, what does ‘Through the Fire’ mean to you?

Dorn: It’s my first real foray into directing. Where it is from the ground up. I’ve directed before, I’ve directed a sitcom and I’ve directed a bunch of Star Trek episodes. They’re all wonderful and I had a great time but basically, you’re coming in the middle and you’re not creating anything. That was my initial reason for getting in the business, I just love that part of it and so this means we will have the money we need to hire the actors, to hire the crew. I want to work with the people I worked with before–who are artists in everything they do and to be able to not only prove to myself. I don’t have a doubt about being a director, but to show the business that you don’t need to have formulas to make a movie work or make it successful or anything. All you need is to have a good director, a good script, good actors and a good crew. That’s all you can hope for.

At our level, there’s movies out there that have made a fortune from five million, a million dollars, seven-hundred and fifty and there’s movies out there that cost 300 million that flop, that make $40 thousand dollars their first weekend. So what’s the formula? Also the good thing is that I’m at a point in my career where it just doesn’t matter about all the trappings of being in the business. What matters to me is the work, doing something interesting and fun. Even if it’s just a day. I was doing ‘Castle’ last year and it wasn’t a huge part where I was running and jumping and shooting, but it was this one little thing at the end of a couple of episodes where she’s talking very dramatically, there’s sexy lighting and she’s wonderful. I’m playing this psychiatrist that’s really kind of getting into her and to me that’s one of the best roles that I’ve had.

RELATED: How You Can Support Michael Dorn’s New Film Project “Through the Fire”

Going back to Star Trek for a minute, throughout both TNG and DS9, we saw Worf’s look evolve. I can imagine getting into the makeup was quite an ordeal and a painstaking procedure. Did the process get easier as time went on?

Dorn: No. Easier is not the right word. It got shorter, but it was never easy. The first three years [on TNG], they just couldn’t get it right. They tried and tried, but they just couldn’t get it right. They couldn’t agree on what was the best look. There was this one scene that I shot, where I was on the ground and came to and woke up real fast and I turned quickly and the hair was in like a Donna Reed style and it flowed beautifully. I was like “This is ridiculous. He would get up in the morning, tie his hair back and go to work.” and they kind of adopted that. There was a little reluctance at first but when they discovered it would take 20 minutes off the make up process they jumped at that. Later on Mike Westmore always did something a little different with the look every year. That was good too. I liked that because it helped with the characterization. 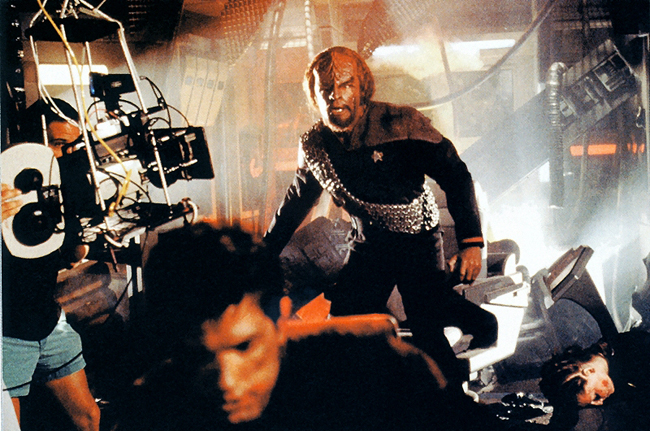 Some of your former cast mates — Brent Spiner, LeVar Burton and Will Wheaton have all appeared on ‘Big Bang Theory’. If you were cast for the show, possibly as part of a dream sequence, what are the chances you’d be interested in putting on the Worf makeup one more time?

Dorn: [Laughs] I don’t know. That’s a long shot I think. Not so much about the process, but you’re pushing the envelope by putting the Worf makeup on and going on another show in another genre, you’re asking for trouble. Even in a dream sequence its one of those things where if you did that, I think you’re driving the stake into his heart at that point–not into his heart, but into the character’s heart.

Read part one of our exclusive interview with Michael Dorn.

For more information on Through the Fire, visit the Kickstarter page. You can also follow Michael Dorn on Twitter at @akaworf.

In this article:Interview, Michael Dorn, Star Trek: The Next Generation