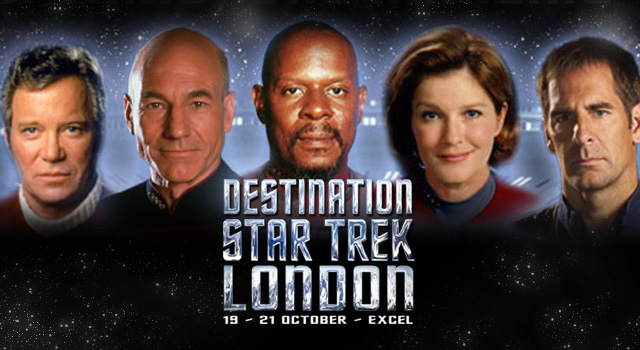 Next month, the largest UK Star Trek convention in over a decade will take place, as Destination Star Trek beams down to London‘s ExCeL Centre from October 19th through the 21st.

Tickets start at £29 for standard entry and go up to Silver, Gold, Platinum and VIP packages.

More information in the press release below.

Young cast members also attending include: Cirroc Lofton who played Jake Sisko, the son of Captain Benjamin Sisko, the youngest regular cast member of the Star Trek: Deep Space Nine series, and Daniel Stewart, who played Batai, the son of Captain Picard in the alternate reality episode “The Inner Light” and is the real-life son of Patrick Stewart.

This incredible line-up will showcase a who’s who of the Start Trek franchise, offering a once in a lifetime chance for fans of the TV series and movies to be in the company of some of their most iconic screen heroes under one roof, making Destination Star Trek London the biggest gathering of Star Trek celebrities, writers and producers the UK has seen in over a decade.

Each of the celebrities and guests will be onsite during the course of the three day event, offering talks, photo and autograph signing sessions. The captains will also be participating in an Opening Ceremony talk, the first time in Europe that all five TV Captains have appeared on stage together, which will give fans the opportunity to ask questions directly.

Visitors to the event who come in dressed as their favourite Star Trek characters will also be able to take part in our daily Costume Parades. Entrants will be judged in a variety of categories by our V.I.P judging panel for a chance to win prizes.

Two exclusive parties are also planned for the Friday and Saturday nights, taking place at the ExCeL with entertainment included so there’s something for everyone who attends. The Klingon Monster Ball (Friday 19th Oct) will feature live music with JG Hertzler and Robert O’Reilly, blood wine and a host of Klingons to celebrate the first day of the event.

Whether you’re a dedicated follower of the Star Trek series since it began, or just curious about the Star Trek universe, there will be something for everyone at this year’s show!