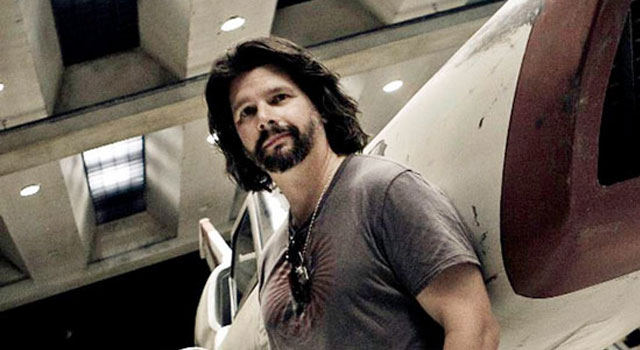 Ronald D. Moore, producer of three Star Trek series and the re-imagined Battlestar Galactica series recently sat down to discuss his time on Star Trek, what it would take to launch a new Star Trek TV series and TNG’s 25th anniversary.

Looking back on The Next Generation, Moore said:

It’s really an amazing thing to look back on. There are personally a lot of different resonances. I was very young when I started on the show. It was where I learned my craft, and where I was introduced to the business of television production. It was where I learned to work with senior writers, and watch them come and go with the show’s politics. Those first few years held a big learning curve for me.

Looking back now on our workload, I just shake my head at our pace. Star Trek: The Next Generation was my first series, so I didn’t know anything about that when I started. I just assumed it was normal to make 26 episodes a year on a seven-day shooting schedule. Sometimes we’d do a show in six days, and it wasn’t uncommon for there to be days on the set where we shot nine or 10 pages. That was just our routine, but now I look back on it with horror. Doing that now would make me nauseous, especially since shooting for eight days is the norm out there today.

Moore, who worked on The Next Generation, along with Deep Space Nine and Voyager, went on to discuss what he thinks it would take to make a new Star Trek TV series happen.

People have to understand that the Star Trek films are a different animal. And that goes for the original series’ movies, as well as those from The Next Generation, and from J.J. By their nature, the Star Trek films are much more action-oriented, with space battles, big villains, lots of running and jumping. The stakes for Earth and the universe are always enormous.

But the lifeblood of Star Trek’s television shows is its morality plays and social commentary. It’s sci-fi that provides a prism on human society and culture. The movies are never really going to do what the episodes do, like split Picard into two in a transporter beam and then talk philosophically about the nature of humanity, which parts of our strength come from good and which from evil. The movies are never going to do that. Star Trek: The Next Generation was about those moral issues, about how societies grow and are differently affected. None of these are topics that the movies are going to tackle.

To create Star Trek in the form that people are familiar with requires another television series, and I think it will be successful again in that medium. You have to spend some time talking about its form and structure, and how to update it again for a new audience. You still want the “boldly go where no one has gone before” part with a ship, crew and ongoing mission. That’s part and parcel of the franchise.

But you have to be able to tackle big ideas, which are larger than chasing the villain of the week. That’s really not what the series was very good at. I mean, you could look back at the original Star Trek series or The Next Generation and find some cool action-adventure episodes with space battles, but the show is about so much more than that. If you were trying to do that flavor of Star Trek on television every week, it would just fail.

Read the entire interview at Wired.