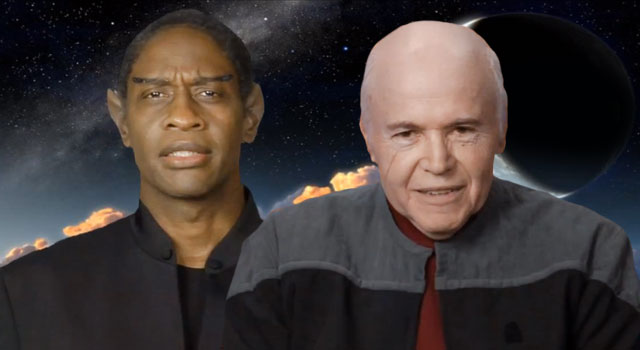 The producers of Star Trek: Renegades have posted a synopsis of the the recently proposed Star Trek web series on their Kickstarter page.

Produced by the team behind 2007’s Star Trek: Of Gods and Men, Renegades is currently asking for pledges through the social fundraising site, Kickstarter. With a goal of $200,000, current pledges (as of this writing) are just under $108,000. To receive funding, the project must reach it’s goal before November 26th at 7:21am EST.

Read the synopsis below.

It is nearly ten years after Voyager’s return from the Delta Quadrant, and the Federation is in a crisis. The planet Reuel VII, the Federation’s main supply of dilithium crystals, has essentially vanished. Space and time has folded around Reuel VII, effectively isolating it from any contact with outside worlds. And this phenomenon is not natural – someone or something has caused this to happen.

This necessitates drastic measures; some of which are outside the Federation’s jurisdiction. For this, Admiral Pavel Chekov, head of Starfleet Intelligence, turns to Commander Tuvok, Voyager’s former security officer and current head of the newly reorganized Section 31. Tuvok must put together a new covert, renegade crew – mostly outcasts and rogues – even criminals. This new crew is tasked with finding out what caused the folding of time and space around Reuel, and stopping it – at all costs – from happening to their final source of energy. But will they be able to put aside their differences and stop trying to kill one another in time to accomplish their mission?

Walter Koenig and Tim Russ discusses the project in the videos below.