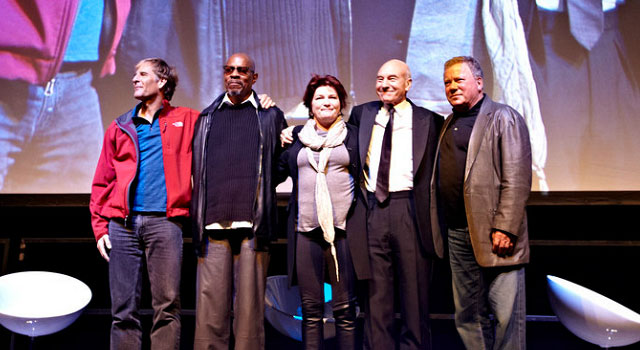 Destination Star Trek London kicked off on Friday in a big way, bringing together all five legendary Star Trek captains. William Shatner, Patrick Stewart, Avery Brooks, Kate Mulgrew and Scott Bakula appeared together during the opening ceremony of what has become London’s largest Star Trek convention in over a decade.

Scroll down for photos of Friday’s festivities.

The opening day also witnessed the first ever Klingon Wedding in the UK as Jossie Sockertopp 23 and Sonnie Gustavsson 29, from Skåne in Sweden, tied the knot in full Klingon costume at the event. Conducted by celebrant, Peter Wyllie the bride and groom entered into a traditional Klingon ritual and officially became man and wife in the company of their guests and the public who were also dressed up as Star TrekTM characters.

Fans of the show can expect many exciting features at the event including: guest talks, autograph opportunities, photo shoots with the stars, as well as replica sets, a unique Star Trek Museum, stunt demonstrations, costume displays and lots more!

This evening will also see the Guinness World Record Attempt which will aim to gather the largest number of Star Trek characters in one place at 6.30pm on Saturday 20th October.

Followed by the official Star Trek Party to mark the 25th Anniversary of Star Trek: The Next Generation, which will feature Chase Masterson (Barjoran Dabo Leeta – Star Trek: Deep Space Nine), and her all-star cabaret!

Fans of the iconic sci-fi franchise descended on London for the three-day event to see a range of entertainment, activities, professional photo shoots, autograph sessions, movie sets, memorabilia, stunt displays and the largest collection of celebrity guests ever seen together.

Whether you’re a dedicated follower of the Star TrekTM, series since it began, or just curious about the Star Trek universe, there will be something for everyone at this year’s show!