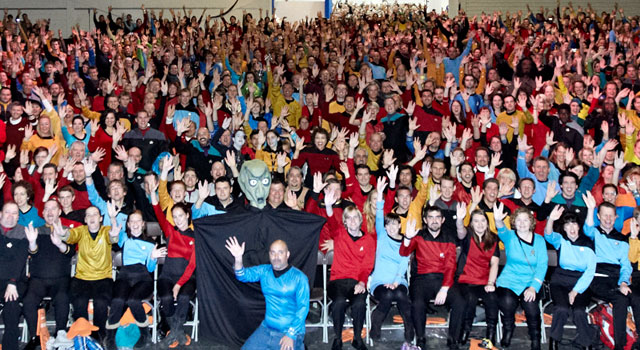 On Saturday, the world record for the most costumed Star Trek fans in one place was shattered at Destination Star Trek London as 1,084 convention goers filled the Main Stage of London’s ExCel Centre.

The previous record of 1,040 was set at the 2011 Las Vegas Star Trek convention.

Photos and press release below. 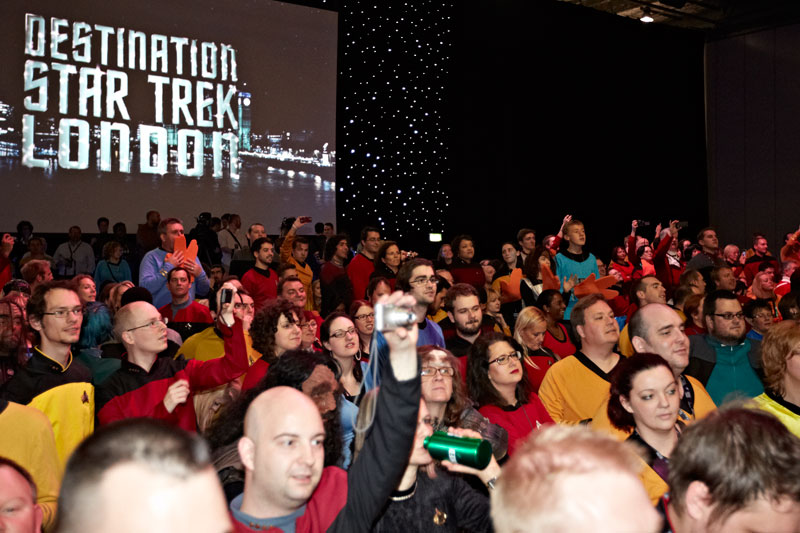 Fans from across the country arrived on mass to fill the Main Stage of the first Star Trek convention to the UK in over a decade. Dressed from head to toe as their favourite characters, ‘Trekkies’ queued to officially register for the attempt. Filling the concourse of London’s ExCel Centre, adjudicators recorded details of each individual, and entrants were counted into the Main Stage Hall for the official record breaking photo shot (attached).

The new World record broken today (Saturday 20th October 2012) beats the previous record of 1040 fans together, which was achieved at the Las Vegas Star Trek Convention which took place in June, 2011 where fans descended on the Las Vegas Rio Suites Hotel in Las Vegas, USA.

Many of the characters who dressed up to beat the World Record today had taken part in Costume Parades that have been taking place over the course of Destination Star TrekTM London. More Parades will take place tomorrow, entrants are judged by a VIP judging panel for the chance to win prizes.

The World Record celebrates a magnificent weekend of parties, guest appearances, autograph opportunities and more. This exclusive event is open for just one more day (Sunday 21st October 2012), and members of the public are invited to come down for their last chance to be a part of history.

Fans of the sci-fi series still have one more day at London’s ExCel Centre, with the chance of seeing a range of exciting features including picture and autograph opportunities, a replica set from the Star Trek series, a unique Star TrekTM Museum, Klingon workshops, stunt demonstrations, costume displays and lots more!

Whether you’re a dedicated follower of the Star TrekTM series since it began, or just curious about the Star TrekTM universe, there will be something for everyone at this year’s show!