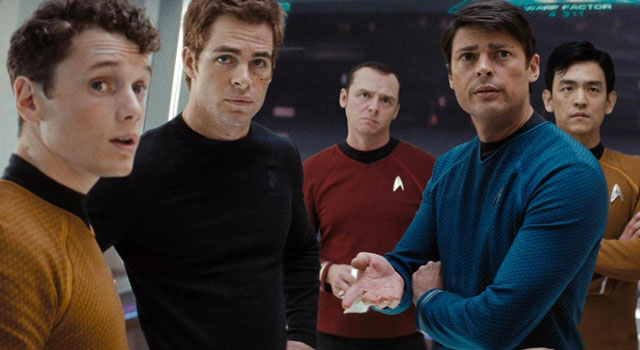 Paramount has issued the first official film synopsis for J.J. Abrams’ Star Trek: Into Darkness. While the rumor mill has been heavily churning for the last few months and only small glimpses of the film have surfaced through leaked photos from the set in addition to the incredibly short three frames Abrams unveiled during an appearance on the Conan O’Brien show, the synopsis is our first confirmation of what we can expect when the movie hits theaters next year.

In the synopsis, the film’s villain is described as “an unstoppable force of terror from within their own organisation” and goes on to say “Captain Kirk leads a manhunt to a war-zone world to capture a one man weapon of mass destruction.”

Check out full synopsis below.

When the crew of the Enterprise is called back home, they find an unstoppable force of terror from within their own organisation has detonated the fleet and everything it stands for, leaving our world in a state of crisis.

With a personal score to settle, Captain Kirk leads a manhunt to a war-zone world to capture a one man weapon of mass destruction.

As our heroes are propelled into an epic chess game of life and death, love will be challenged, friendships will be torn apart, and sacrifices must be made for the only family Kirk has left: his crew.

Does the description make you more or less excited about the film? Tell us in the comments below.