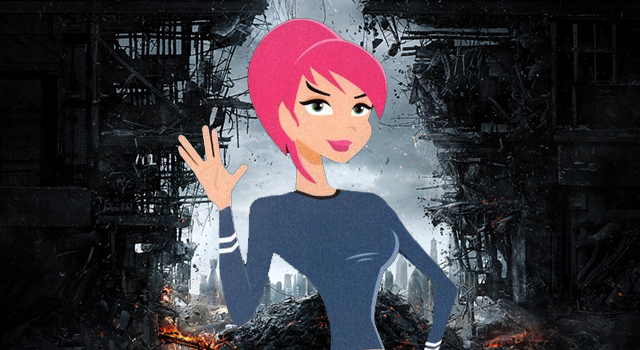 On Tuesday, Esurance along with Paramount Pictures announced a sweepstakes for fans to win two tickets to the U.S. premiere of STAR TREK INTO DARKNESS and $2,500 in travel expenses along with exclusive online content through the Esurance Facebook page.

According to the press release, Esurance will offer fans a variety of exclusive content, including:

For more information, check out the press release below or visit Esurance Facebook page. 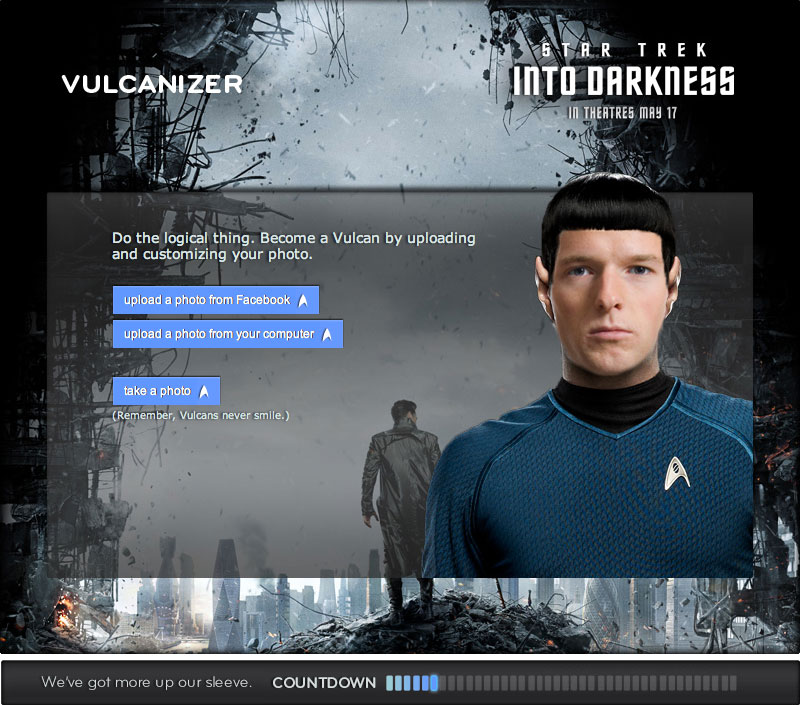 SAN FRANCISCO – January 29, 2012 – Esurance, the direct to consumer personal car insurance company, is teaming with Paramount Pictures to promote “STAR TREK INTO DARKNESS,” the sequel to J.J. Abrams’ 2009 hit film which introduced Star Trek to a new generation of fans.

A company known for bringing car insurance into the modern world, Esurance is offering fans a variety of ways to engage with the movie prior to its highly anticipated release on May 17, 2013. Key elements of the movie-themed online promotion, which starts today, include:

– An exclusive behind-the-scenes look into the making of the next thrilling adventure for Captain Kirk, Spock and the Enterprise crew on the Esurance Facebook page.
– Embrace the Darkness Sweepstakes – Esurance will send one lucky winner and a guest to the U.S. premiere of “STAR TREK INTO DARKNESS.” The winner will also receive $2,500 in travel expenses.*
· – “The Vulcanizer” – Fans can upload and share photos of themselves magically ‘transformed’ into Vulcans.

· – Downloads – Exclusive movie-themed content such as wallpaper for screensavers, icons and movie posters are available to download and share with friends.
“Much like “STAR TREK INTO DARKNESS” takes movie audiences to exciting new worlds, Esurance, as car insurance for the modern world, is taking car insurance to the next level,” said Esurance Chief Marketing Officer John Swigart. “This film is one of the most widely anticipated movies in years, and we’re excited to have the opportunity to offer fans a chance to see the premiere and enjoy a unique Facebook experience that they can share with their friends.”

“STAR TREK INTO DARKNESS” is written by Roberto Orci & Alex Kurtzman & Damon Lindelof and directed by J.J. Abrams. Abrams is producing with Bryan Burk through Bad Robot Productions, along with Lindelof, Kurtzman and Orci. Jeffrey Chernov and Skydance Productions’ David Ellison, Dana Goldberg and Paul Schwake are the executive producers.

*NO PURCHASE NECESSARY TO ENTER OR WIN. A PURCHASE WILL NOT INCREASE YOUR CHANCES OF WINNING. Sweepstakes begins at 12:00 p.m. PT on 1/28/13. Ends at 11:59 p.m. PT on 2/15/13. Open to legal residents of any U.S. state or DC who are age 21 at time of entry. Internet access, a Facebook account in good standing, and a “Like” of Sponsor’s page are all required. Void where prohibited by law. To enter, log on to facebook.com/esurance and follow on-screen links to the Embrace the Darkness Sweepstakes. SUBJECT TO FULL OFFICIAL RULES by mailing a self-addressed, stamped #10 envelope with proper postage to “Esurance Embrace the Darkness Sweepstakes,” ATTN: Official Rules Request, 650 Davis Street, San Francisco, CA 94111. VT residents may omit return postage. ARV of prize: $2,500. Prize details may vary. Limit 1 entry per person, per email address, per day. Odds of winning depend upon the number of eligible entries received. Sponsor: Esurance Insurance Services, Inc., 650 Davis St., San Francisco, California 94111-1922.

About Esurance®
Esurance provides auto insurance direct to consumers online, over the phone, and through select agents, including sister company, Answer Financial. With an easy-to-use mobile app, quick comparison quotes, and online repair monitoring, Esurance is insurance for the modern world™ and the smart choice for today’s web-savvy consumer. As a member of the Allstate family with an A+ rating from A.M. Best, Esurance is a reliable choice for car insurance, offering anytime, anywhere service just a click, call, or tap away. For more information, visit www.esurance.com or call 1-800-ESURANCE (1-800-378-7262).