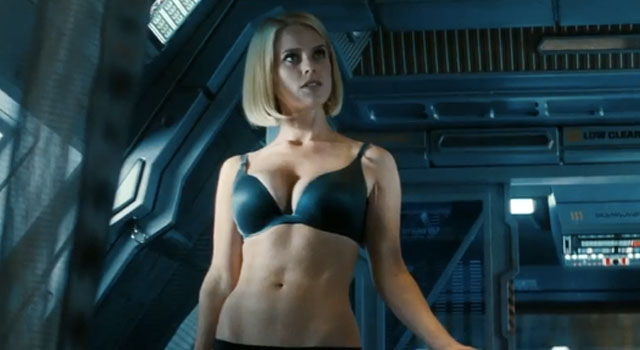 Paramount Pictures has released a new “international trailer” for J.J. Abrams’ STAR TREK INTO DARKNESS. The new trailer will be attached to international showings of Paramount’s G.I.Joe: Retaliation, which hits theaters next week.

A ton of new footage is shown during the action-packed trailer, including some new information about the film.

Scroll down to watch the international trailer.

During the 2-minute and 18-second trailer, John Harrison (played by Benedict Cumberbatch) is referred to by Admiral Marcus (played by Peter Weller) as “one of our top agents.”

“Your commanders have committed a crime I cannot forgive” says Harrison.

Following some destruction, Kirk is heard asking to go after Harrison. “This could just be the beginning. I request permission to go after him.”

“I have no idea what I’m supposed to do. I only know what I can do.” Kirk tells McCoy regarding his desire to go after Harrison.

When Kirk meets Harrison face-to-face, he tells him “I watched you murder innocent women and children. I will make you answer for what you did,”.

“You have no idea what you have done. I will walk over your cold corpses.” Harrison tells the Enterprise crew.

“We’re outgunned. Outnumbered” Uhura tells Kirk. To which he replies “So we come out shooting.”

The Enterprise plummets toward Earth

We then see a battle damaged Enterprise crash down to Earth near Alcatraz and into the Pacific Ocean.