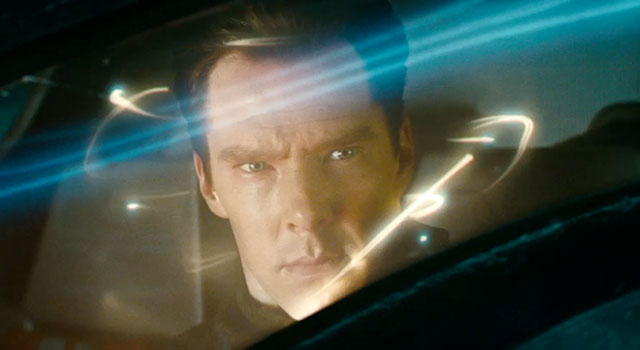 On Tuesday, Paramount released a new domestic trailer for the upcoming release of STAR TREK INTO DARKNESS. The new trailer highlights Kirk’s struggle and the destruction — and possible resurgence of the Enterprise and her crew.

The trailer begins with Christopher Pike speaking to Kirk, as he tells him “You think you can’t make mistakes, but the choices you make could get yourself and everyone under your command killed — but I believe in you, Jim.”

Harrison’s voice predicts the forthcoming destruction, as we hear him say “Darkness is coming.”

Following a face-off between the Enterprise and what is speculated to be Harrison’s ship that leads to the Enterprise crashing into the ocean, Scotty tells Kirk “The ship’s dead, sir. She’s gone.”

Kirk replies “No she’s not,” as we watch the Enterprise rise from the water.

Check out the final theatrical trailer and stills below.

Click to enlarge the stills from the trailer below.

The Enterprise rises from the ocean