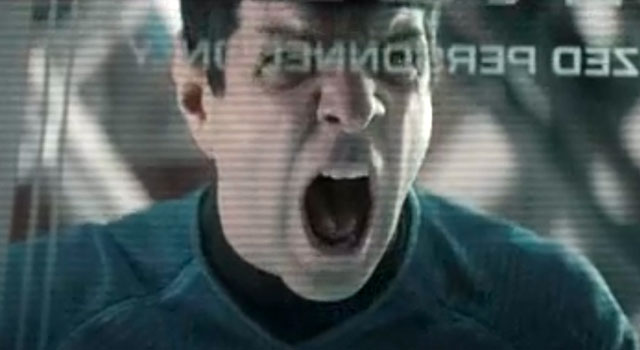 On Thursday, Paramount released a new viral trailer for STAR TREK INTO DARKNESS through Yahoo Movies. The new trailer, with an ominous voiceover by Benedict Cumberbatch, looks at Spock’s struggle between his Vulcan attempt to live by logic along with his human emotions.

Coupled with grainy visuals from the upcoming film, we hear Cumberbatch’s character John Harrison as he describes Spock’s inner turmoil.

Mister Spock, the mind of the Enterprise. A fearless genius who ensures a calm force of intelligence guides their every mission.

But look deeper and you will see an outsider who does not belong. A man of two worlds. This tears him apart. A constant battle between what he thinks and what he feels. What does he do? Does he follow his head embracing logic and the power of reason or does he follow his heart, knowing the emotions he cannot control may destroy him?

I will help him decide.