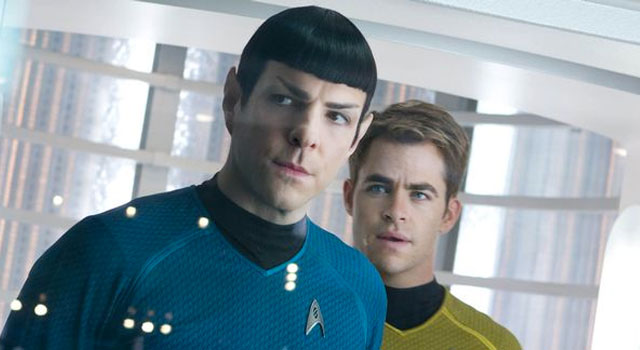 Paramount announced on Tuesday that STAR TREK INTO DARKNESS will be released in 2D and 3D on Thursday May 16th. Previously, the film was set for “sneak peek” IMAX 3D screenings on Wednesday May 15th and all other screens were scheduled to follow two days later on the 17th.

According to a Paramount press release, the bump is due to “strong interest” and the film selling out in several IMAX 3D locations.

Now, domestic fans will be able to see the film a day earlier than was previously announced.

For more information, scroll down to check out the press release below.

OPENING MOVES UP A DAY TO THURSDAY, MAY 16TH

HOLLYWOOD (May 7, 2013) – IMAX® theatres are reporting sell-outs of its special “STAR TREK INTO DARKNESS” sneak peek shows on Wednesday, May 15th, with showings in Los Angeles, New York City, Philadelphia, Washington, D.C., Seattle, Austin, San Francisco, Houston, San Diego and Minneapolis now at capacity. Interest continues to be strong at other IMAX locations across the country, which are offering fans the opportunity to be the first to see the film at 8:00 p.m. that evening. In response, Paramount Pictures has moved the film’s Friday, May 17th release up a day to May 16th.

Tickets are available on the film’s first-of-its-kind movie App, a technology that allows users to delve deeper into the Star Trek universe, and can also be accessed via IMAX.com or through Fandango.com, Movietickets.com, as well as other ticketing platforms and at theatre box offices. While supplies last, all 8:00 p.m. IMAX fan sneak attendees will receive a limited-edition IMAX FANFIX™ “Star Trek” Gallery 1988 movie print by Mark Englert.

The IMAX release of “STAR TREK INTO DARKNESS” will feature approximately 30 minutes of footage filmed with the extremely high-resolution IMAX® cameras. These specific sequences, which will expand to fill more of the screen exclusively in IMAX, will deliver unprecedented crispness and clarity and a truly immersive experience for moviegoers.

Paramount’s “STAR TREK INTO DARKNESS,” based upon “Star Trek” created by Gene Roddenberry, is written by Roberto Orci & Alex Kurtzman & Damon Lindelof and directed by J.J. Abrams. Abrams is producing with Bryan Burk through Bad Robot Productions, along with Lindelof, Kurtzman and Orci. Jeffrey Chernov and Skydance Productions’ David Ellison, Dana Goldberg and Paul Schwake are the executive producers.

“STAR TREK INTO DARKNESS” opens in theaters everywhere May 16th, 2013.