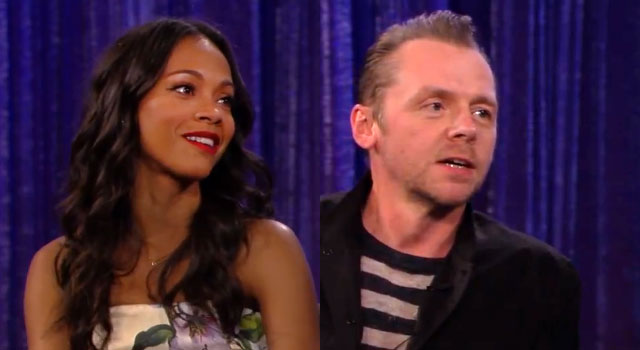 Earlier this week, two of the stars of STAR TREK INTO DARKNESS appeared on Jimmy Kimmel Live to promote the upcoming domestic release of the film.

Pegg, who appeared on Wednesday night discussed his love of Star Trek and the Scotty character, saying “I’ve watched that character since I was a little kid and to suddenly be him — and people, when they say ‘beam me up Scotty,’ that’s me now. I can’t say that anymore. I have to say ‘beam me up me.”

Saldana, who had just gotten back from the film’s premiere in Mexico, talked about how the cast kept themselves entertained during downtime, including juggling and dancing with aliens.

She also discussed the secrecy involved with working with J.J. Abrams, saying that she couldn’t even tell her mom what the film was about.

Check out both appearances along with a clip from the film below.

In this article:Simon Pegg, Star Trek Into Darkness, Zoe Saldana