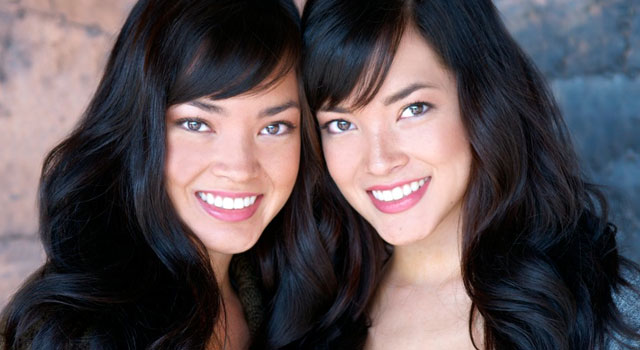 Katie and Kellie Cockrell, who appear in STAR TREK INTO DARKNESS in supporting roles recently sat down with TrekNews.net for an exclusive interview. During the interview, the twin sisters discussed their experience working on the film, their interactions with the cast and crew along with director J.J. Abrams.

Tell us about the auditioning process for Star Trek Into Darkness

Kellie: We auditioned for it and it was really secretive. We didn’t know what we were auditioning for. The process took about 2 months. We did the initial audition and then about a month later we did a call back — which was a photo shoot, and then, about another month later we did a meet-and-greet with J.J. Abrams. We met him on set — they were filming and so we got to watch him film for a little bit. Then we had a meeting with J.J. and he said, “This is great, we’ll see you on set.” And that’s the first time we found out that we got a role. And then about a week later, we were on set doing make-up tests and the whole thing happened. It was really exciting.

How much can you tell us about your characters, obviously without revealing too much?

Katie: Our characters are not human; we can say that. They are kind of organic characters that stem from the comic book series. And we have a scene that is with Chris Pine and it’s really helpful to the story line because it shows Chris’s kind of playful side and just of kind of sexy side and kinds of brings out his personality.

Meeting Chris was amazing. He is incredibly handsome. He’s very good-looking, he is very talented, charismatic. And we just loved it. We loved every part of it.

Do you have a favorite Star Trek character?

Kellie: I really like Spock. I think he’s funny. He’s like… “charming” (laughs). Yeah, I like Spock. And I think Zachary Quinto who plays him is very cool. I liked him on “Heroes.”

Katie: I think my favorite character is probably Zoe Saldana’s character. She plays Uhura. I just think she does a really great job with it and I like her interaction with Kirk and how her and Chris Pine kind of play off of each other. 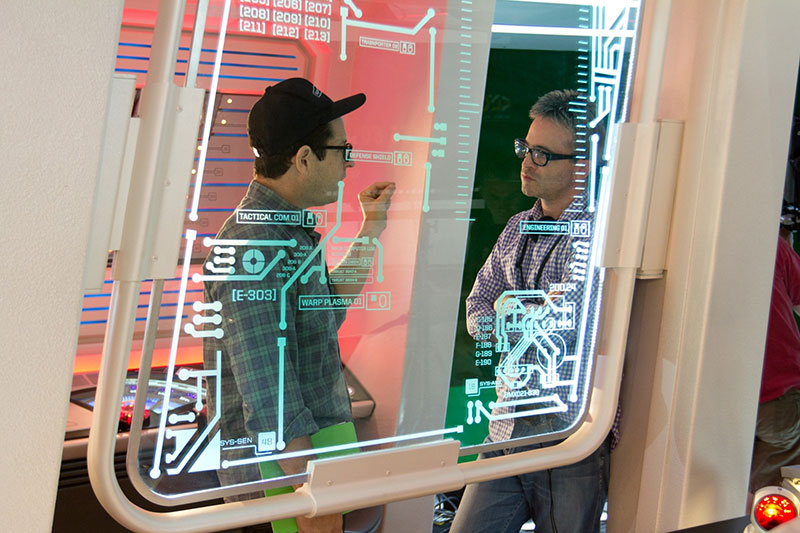 J.J. Abrams and Alex Kurtzman on the set of Star Trek Into Darkness

Tell us about working on the film. What was it like behind the scenes?

Kellie: It was incredible. Everyone on the set was the best of the best. The make-up people were the best in the industry of make-up and then, the director, J.J. Abrams, was amazing, and the camera operators were amazing. It was just a cool experience to be around all these professionals who have worked so hard in their industries and have worked their way up, so that was awesome. And then we got to be really great friends with the special effects make up people because we got to spend 10-12 hours a day for 12 days with them doing the different make-up tests. We really learned about them and how they got started in make up. That was really cool. And, also, watching Zoe Saldana and John Cho do their scenes was amazing. Just seeing how great is their technique and how they are working as actors was really cool to watch them.

Katie: I think when you are on set and there is the Star Trek Enterprise in front of you and J.J. Abrams is directing you, there are moments when you are just pinching yourself asking, “Am I actually here? I actually get to be part of this?” And we get to. It’s so mind-blowing, so incredible.

Kellie: Well, without revealing too much there are people operating different parts of a prosthetic type of thing and we all had to take part and coordinate and make it look the same. So, just that process was really involved. I don’t want to give too much away but it was just that a lot of things needed to happen at the same time. So that was interesting. It was difficult but it was interesting to see how they made that happen.

You have quite a background in both dance and acting. How did you become interested in acting? Tell us about your first performance.

Kellie: We started out as dancers and we didn’t really get into acting until high school. We were on the dance team and one of the photographers said, “Oh, you guys should go this modeling agency” in Utah, where we are from, and so we went to the agency and they said, “You are too short to do modeling but why don’t you try acting.” And we were both very scared by that idea, we were just very intimidated. We were just kind of “I don’t know” about it but we decided to audition anyway for the roles of Sage and Sapphire Sinister in the Disney Channel Original Movie, “Return to Halloweentown.” We actually ended up booking it and so that was our first acting experience ever and it was really exciting, really scary. We learned a lot and had a lot of fun and we kind of became hooked after that.

How has being twins helped your or challenged you?

Katie: I think being a twin is very helpful to us actually. You know, there is definitely a negative to it, too. We audition for a lot of the same roles so we have to compete against each other sometimes but overall, being a twin has helped us a lot because we can go to an audition and we can stand out, and we kind of go through this crazy acting world together. You know, when you are upset, you have someone, who is your twin, she is your best friend. It really helps you calm done and do the best performance that you can.

What is the biggest challenge you have faced in your career in acting?

Katie: Yeah, I think acting is a very challenging career path. Any actor will tell you it’s a lot of rejection and 1% of the time you actually book something so just dealing with that sort of rejection, picking yourself up, going to the next audition and always being able to perform to the best of your abilities is the hardest part about it.

What future projects are you working on?

Katie: We just finished filming a really fun indie film called “Feels So Good” and we play the two popular mean girls of the high school and we end up falling for the two nerds. It was a really fun shoot. We all kind of became like family. It was a group of young actors. Matt Shively from “Paranormal Activity,” Brendan Robinson (“Pretty Little Liars”) and some other really great actors. We were really good friends. I think what we filmed was great. When Kellie and I read the script, we were laughing out loud; it was just that funny. I would compare it to “The Hangover” in a sense so we are excited to see it when it comes out.

What would you tell the Star Trek fans about the movie? What should they expect? What is really exciting about it?

Kellie: Well, it’s in 3D and it’s shot with IMAX cameras, so that would be exciting. J.J. Abrams always delivers something that is fresh and new. It has really exciting pacing and tension to keep you on the edge of your seat the whole way through. It takes action to another level. I think it’s just really going to blow people away.

Katie: I would just love to say how great of a director J.J. was. We loved him from “Lost” and a lot of other films. We did 10 make-up days for our one scene and that really just shows what a great director he is, how passionate he is about the film and how much he cares that our characters fit naturally into the larger scene. So, I think, the fans are just going to love it.

In this article:Interview, Star Trek Into Darkness