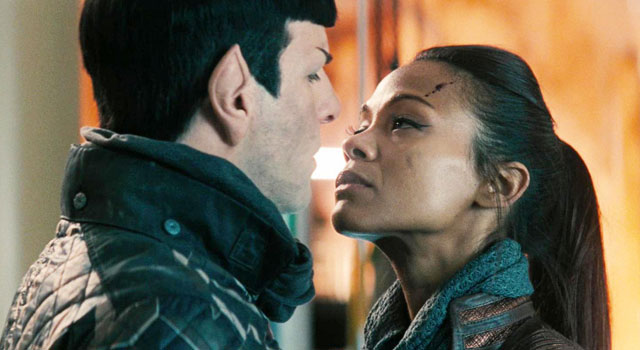 Following the strong international opening of Star Trek Into Darkness, the film opened domestically with $22 million on Friday for a two-day total of $35.5 million, as of Saturday morning.

These numbers, provided by Box Office Mojo, may raise some eyebrows because Star Trek (2009) pulled in a bit more ($26.9 million) on its opening day, which means that the 3D ticket prices have not boosted sales significantly. One explanation may involve the fact that many viewers did not know that the movie was actually opening on Thursday, instead of Friday, a change Paramount just made last week. This lack of awareness from may account for the low estimated $2 million from 8 p.m. screenings at 336 IMAX locations.

Because Paramount made a decision to move the release date to a day earlier just last week, predictions may turn out difficult to make. In terms of comparison with other films and their pre-releases of highly anticipated sequels, The Matrix Reloaded and Shrek 2 also opened on the weekend before Memorial Day back in 2003 and 2004. The two movies earned $134.3 million and $129 million, respectively, by Sunday, with these numbers including pre-release earnings. Trek Into Darkness may hope to reach a similar level of reception when we consider ticket price inflation and the added earnings from 3D screenings.

STID relied not only on the 3D screening but also on four years of fan anticipation and a huge marketing campaign to beat its predecessor’s opening. An initial projection for $100 million for the four-day start seems to set the bar too high after this slow start so Paramount is now projecting $83.5 million for the first four days. The actual numbers may end up dramatically different from the projections, though, as STID is reaching 3,762 domestic screening locations.

Meanwhile, reviewers have given the sequel two thumbs up. The movie received an “A” CinemaScore, and a solid high-80s on Rotten Tomatoes, which means that word of mouth can draw larger crowds. International reception has brought strong numbers as STID earned $31.7 million from seven markets, an increase of an average of 70 percent ahead of the first Trek movie. However, STID is showing in 33 new territories this weekend (including Russia) which adds up to a total of 40 international locations. This means that, unlike its predecessors, the movie is now targeting around 505 of the world market. Because Star Trek is not traditionally a worldwide brand, the new venture will have to do a lot better than 70% more than its predecessor in order to make its case for becoming a worldwide phenomenon.

Star Trek started with the original series TV show, which ran from 1966 to 1968 and became one of the earliest forms of a “cult hit.” The show’s crew came together for the first movie, the 1979’s Star Trek: The Motion Picture, which earned a formidable $82.3 million (or $260 million adjusted for ticket price inflation). These earnings could not compare to the 1977 sci-fi hit Star Wars but proved enough to lead to the making five more films to the early 1990s; In the 90s, the cast of the Star Trek: The Next Generation TV show crew did another four movies wit Patrick Stewart in the lead as Captain Pickard. The last of the four was the 2002 Star Trek: Nemesis, which only earned $43.2 million, the lowest among the series. At the time it seemed that Star Trek’s voyage in theaters had come to an end.

In 2009, director J.J. Abrams, best known for his work on TV shows Lost and Alias, revived the franchise with a big-budget action move which included some of the original characters such as Kirk, Spock and Uhura played by fresh young actors. The movie opened to a strong $79.2 million (including Thursday showings) in May 2009, and earned a total of $257.7 million throughout the summer, more than twice as much as any other Trek movie. The 2009 film, which still has a spot on IMDb’s Top 250 list, also set a ticket sales record and received only praise from critics and audiences alike (95 percent on Rotten Tomatoes).

The 2009 film set the bar high for STID, which is the 12th Star Trek movie, especially since the sequel took four years to come to life. The 2013 film continues to feature key characters and elements from its predecessor, but also brings in a new threatening terrorist character played by Benedict Cumberbatch, who may or may not be an updated version of a classic Star Trek villain. STID’s campaign has also included a different experience for the starship Enterprise, which falls from orbit into the San Francisco Bay, in an impressively filmed sequence.

This summer STID is competing with Iron Man 3, which has so far grossed $33.2 million and The Great Gatsby ($27.6 million).

As far as the all-time epic battle between Star Trek and Star Wars is concerned, the 1999 Star Wars film The Phanthom Menace brought in $431 million and the sequels, Attack of the Clones (2002) and Revenge of the Sith (2005) had $302 million and $380 million respectively. All three relied on production budgets of approximately $113-$115 million. The 2009 Star Trek enters the competition with earnings of $257 million and a budget of $150 million, while STID’s budget was $190 million. These numbers mean that with initial earnings of $35 million only, the Star Trek venture needs to go where no one has gone before to catch up.

Have you seen the film? Tell us what you thought of it in the comments section below.