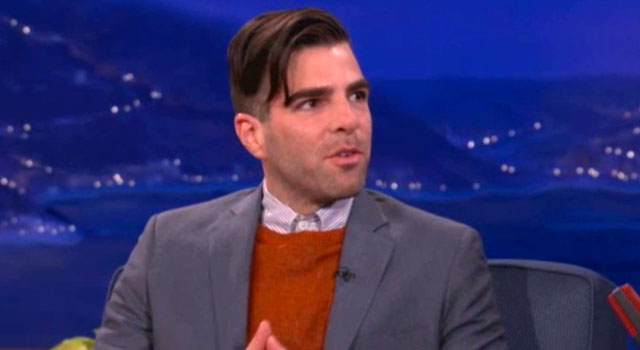 With a multitude of media appearances leading up to–and following–the premiere of the film, the cast of Star Trek Into Darkness has been extremely busy as of late. One of the film’s stars, Zachary Quinto, recently made an appearance on Conan to promote the film and offered a few interesting behind-the-scenes tidbits in the process.

O’Brien discussed Quinto’s performance as Spock during the interview, mentioning the inclusion of so many emotional and action scenes for the character.

J.J. and Bob and Alex and Damon — the guys who wrote the movie really took Spock in a bit of a different direction this time — which I was grateful for. The character is so historically associated with stillness and to be able to bust out of that. I kick some ass in this movie. I’m not gonna lie.

Quinto went on to talk about the training regimen he used to get into shape for the film.

We did a lot of fight choreography and that was supplemented by weightlifting. I had to sprint a lot. So there was a lot of sprint training as well.

The romantic relationship between Quinto’s Spock character and Zoe Saldana’s Uhura is something that took fans by surprise in the 2009 film. With the progression of their onscreen romance growing in Into Darkness, Quinto talked jokingly about where it may be headed next.

Clearly we’re going in that direction for pon farr in the third film.

Other topics of discussion included the addition of Benedict Cumberbatch to the cast, their offscreen adventures at Hooters, his friendship with Leonard Nimoy, and more.