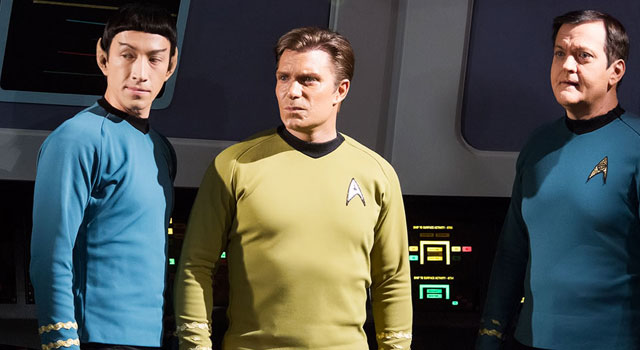 On Friday night, the pilot episode of Star Trek Continues, a new fan-made web series, premiered at Phoenix Comicon and later released online for fans around the world to enjoy.

We first reported on Star Trek Continues back in March of 2012, when Chris Doohan–son of Star Trek‘s original Montgomery Scott, James Doohan–was cast in the series.

Based on the original 5-year voyage of the USS Enterprise, the series picks up where Kirk, Spock, Bones, Scotty, Sulu, Uhura and Chekov left off in 1969.

Entitled “Pilgrim of Eternity”, the pilot episode stars Michael Forest reprising his role as Apollo, from the 1967 Original Series episode “Who Mourns for Adonais?”.

When the Enterprise meets up with an anomaly, a nemesis returns to create havoc for Kirk while Scotty battles the past to make the right decision for him, his fellow crewmates and what was once an enemy.

Watch the pilot episode below.

For more on the series, visit StarTrekContinues.com.