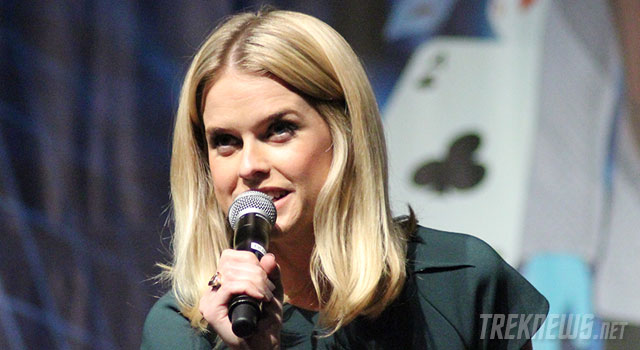 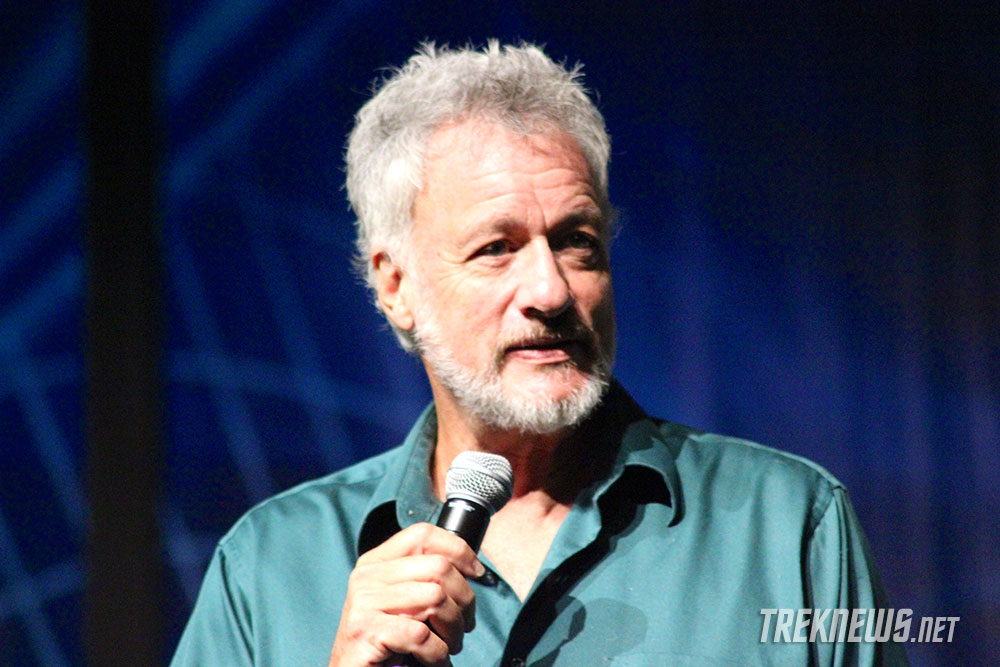 John de Lancie, who played Q on The Next Generation, Voyager, and Deep Space Nine kicked off the second day of the convention in the Roddenberry Theater. John recently returned from an extended boating trip. He went on to talk about a recent project he’s been working on, saying “I have created a documentary about Bronies”. He discussed his acting style and said if you want to see acting, “just turn down the sound.” 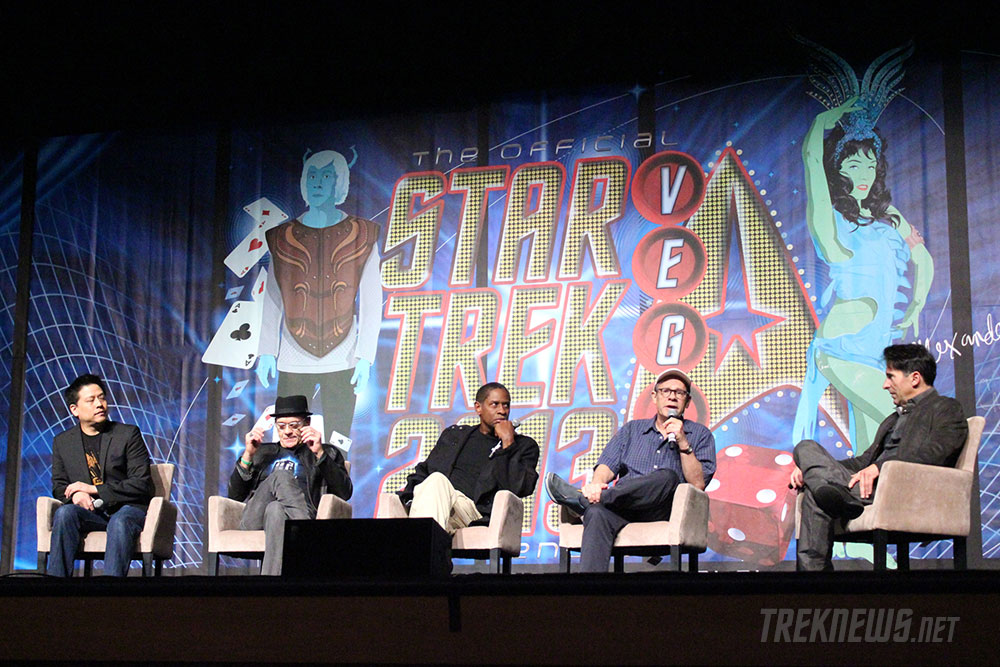 Prior to the Voyager cast coming on stage, a great fan-made tribute video, entitled “To the Journey” was shown.

Discussing the audition process, Robert Picardo said “I loved Neelix. I thought the role of The Doctor was a snooze.” Going on to say “At the end of the audition I said I’m a doctor not a night light. Thanks to that cheesy line, I got 7 years of work”. 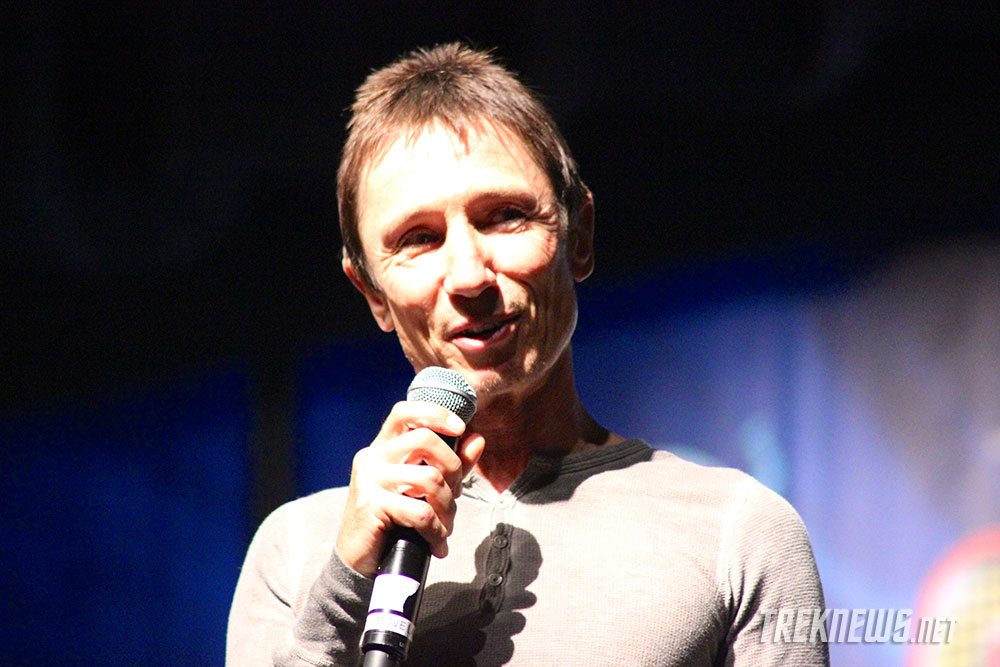 Dominic Keating of Star Trek: Enterprise was up next. Keating took the stage with his alternate version of the Enterprise theme song and discussed the show, its cancellation and current projects with the fans. 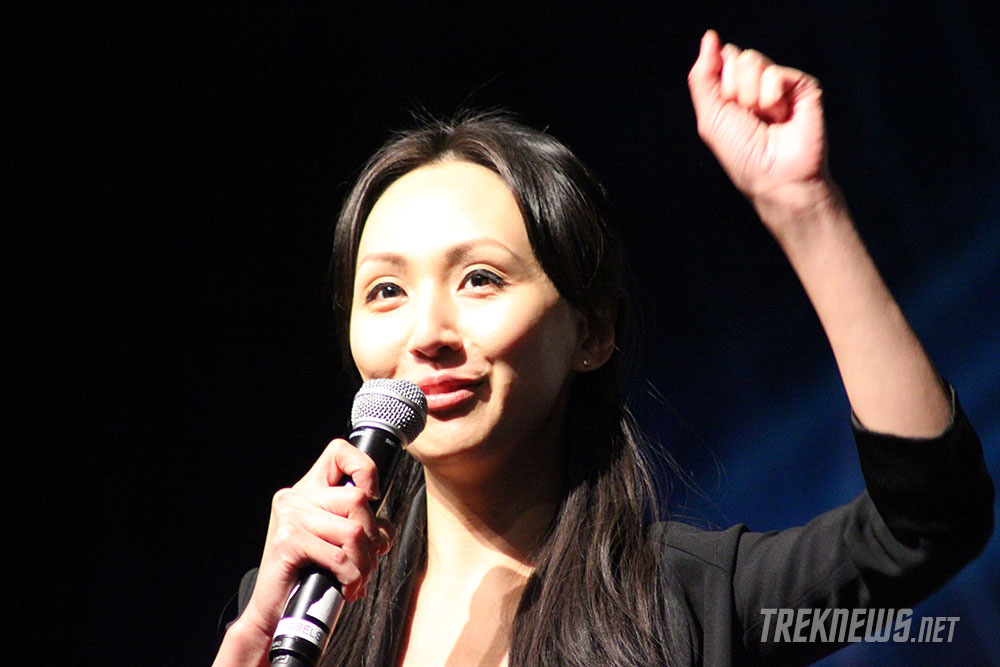 Keating’s Enterprise castmate, Linda Park was welcomed on stage to a great ovation. Park, who doesn’t do many convention appearances was a little unsure of how the questions from the audience worked. After a few minutes, she was doing just fine. When asked what her favorite episodes were, Park told the fans “Mirror Darkly” and “Dear Doctor” were at the top of her list. Park said she would’ve liked to have seen more interpersonal relationships for Hoshi during her time aboard the NX-01. 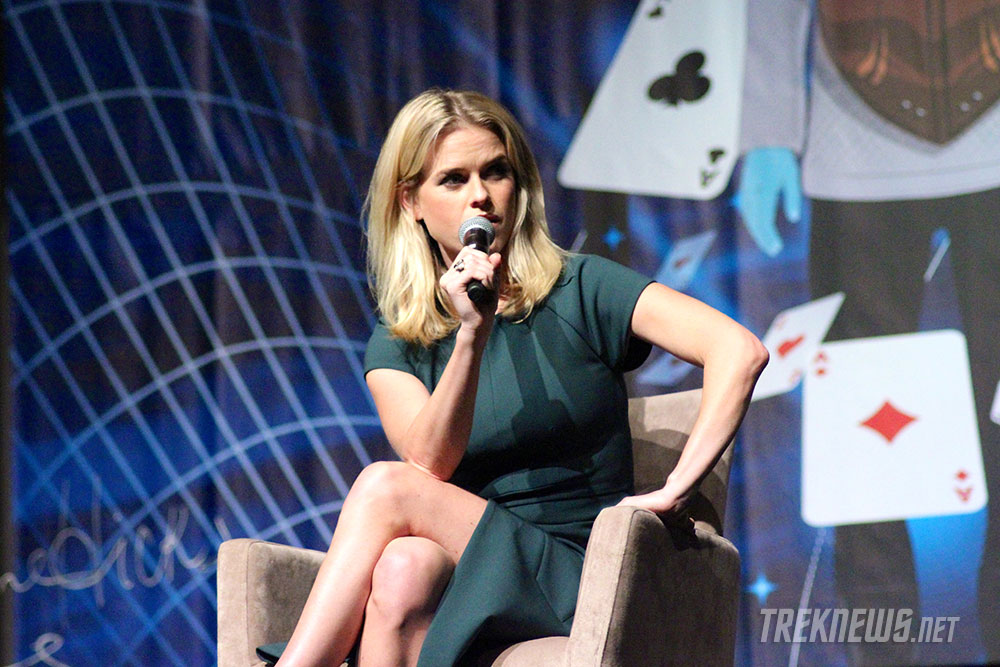 Making her first convention appearance, Star Trek Into Darkness star, Alice Eve, took the stage. The first question for Eve was about her scantily clad underwear scene in the new film. She said she really didn’t expect “all the ruckus” in reaction to the scene. She likened it to Chris Pine’s shirtless appearance in the movie — which received much less attention.

On the topic of doing another Star Trek film to coincide with Star Trek’s 50th anniversary in 2016, Eve said “we’re all looking to make another Star Trek” and noted that she’d like to see Kirk and Marcus’ romance progress. She told fans that she finds the idea of Her character being pregnant and having a baby during the five-year mission very interesting. Discussing J.J. Abrams’ decision not to direct the next Star Trek film, Eve said he had a real affection for Star Trek, but his childhood love was Star Wars. 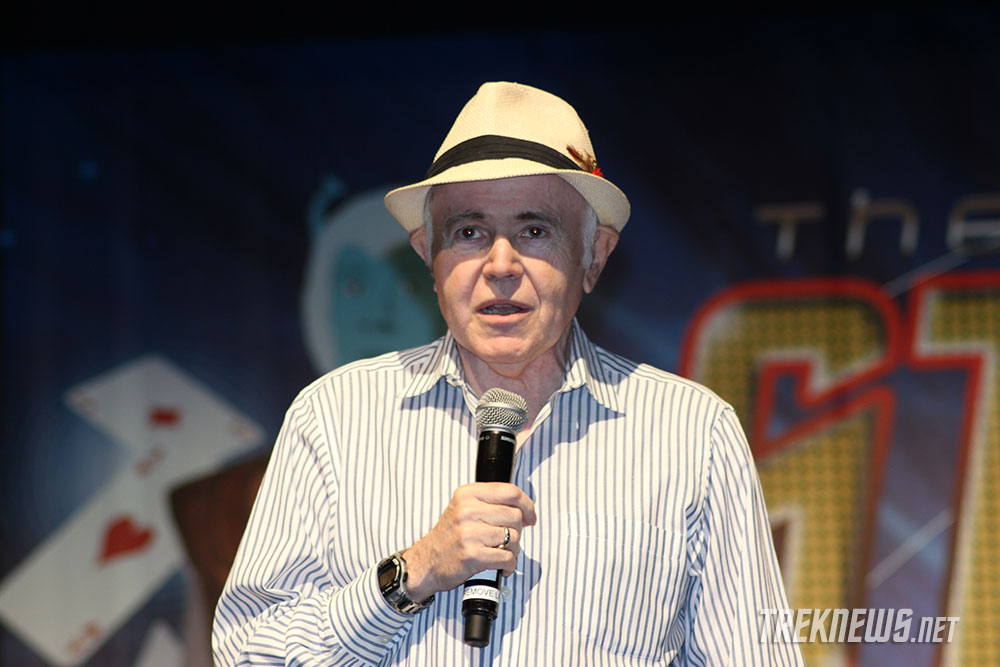 Classic Star Trek’s Walter Koenig was up next. Koenig talked about his recent addition to the Hollywood Walk of Fame. Koenig told fans “The older I get, the more I appreciate Star Trek, in all its forms”. On the topic of getting beat up so often while on away missions, he said “I wrote that into my contract. I relished those moments.”

A lecture conducted by Dr. Ronald Held of the Rensselaer Polytechnic Institute discussing the Star Trek multiverse and how the science-fiction of Star Trek compares to known science in our world today. 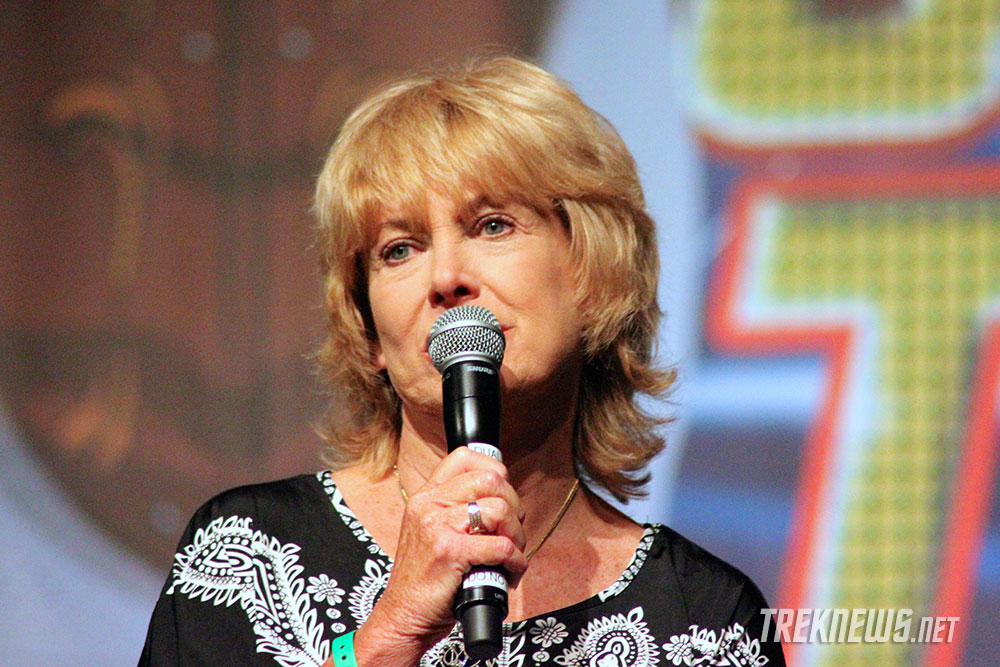 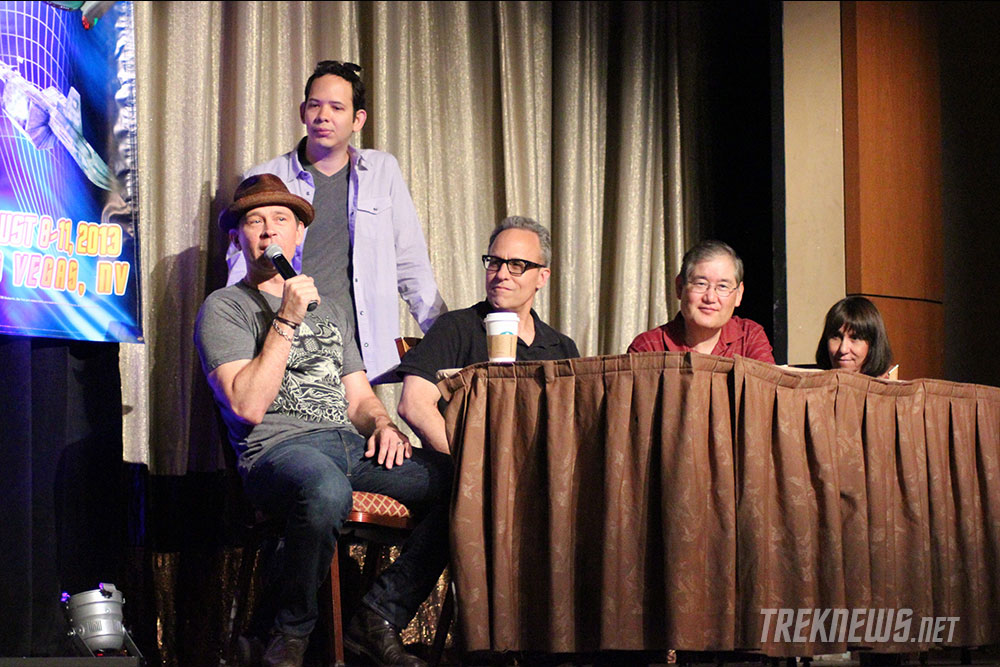 Members of the production team behind The Next Generation and Enterprise’s leap into high-definition talked about the forthcoming releases of each show on Blu-ray. Panelists included consultants Mike and Denise Okuda, producer and director of special features Roger Lay, Jr., and Enterprise visual effects artist Doug Drexler. Mike Okuda told fans that the future releases of DS9 & VOY in HD will be dependent on the sales of TNG and ENT. Roger Lay, Jr. said as they near the final releases if TNG and ENT on Blu-ray “we’ll have to figure out what’s next.”

Towards the end of the discussion, Enterprise star Connor Trinneer joined the panel. Trinneer told fans that he’s been showing his son episodes of Enterprise, but won’t be showing episodes where “daddy isn’t kissing mommy.”