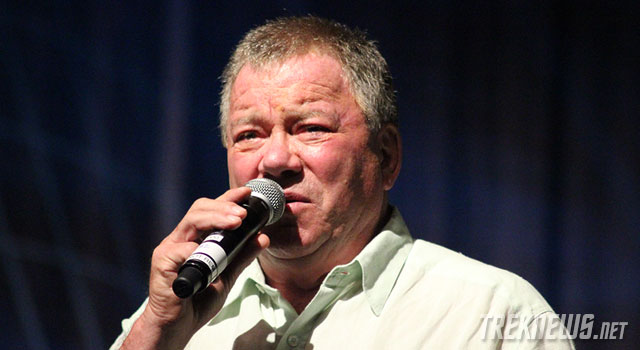 The day’s events kicked off with a special “Creating the World of Star Trek” panel — featuring Michael Westmore, Andre Bormanis, Rick Sternbach, and Mike and Denise Okuda. Some of Star Trek‘s most influential and creative minds discussed their process, obstacles that were overcome and comical moments they experienced while working on the Star Trek franchise. 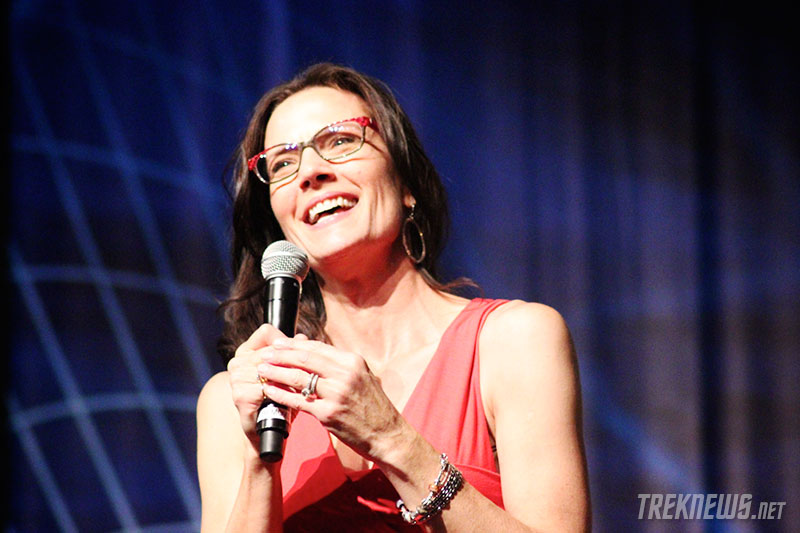 Deep Space Nine star Terry Farrell, looking beautiful in a red dress, hit the stage with tons of energy. Farrell discussed Michael Dorn, her DS9 co-star, saying he was a massive flirt on the set of the show. She talked about playing Jadzia Dax, saying “I wanted to be the female Indiana Jones,” she said of Dax. “I wanted to be Lara Croft.”

Farrell went on to discuss her choice to leave DS9 at the end of the sixth season and the rocky relationships she had with the show’s producers Ira Steven Behr and Rick Berman. She told the fans that while she’s recently mended fences with Behr, she still blames Berman for her leaving the show. She joked about a discussion she recently had with Behr to reshoot the seventh season of the show — to which he warned “Don’t tempt me.”

“I loved every minute I played Dax” Farrell told the audience. 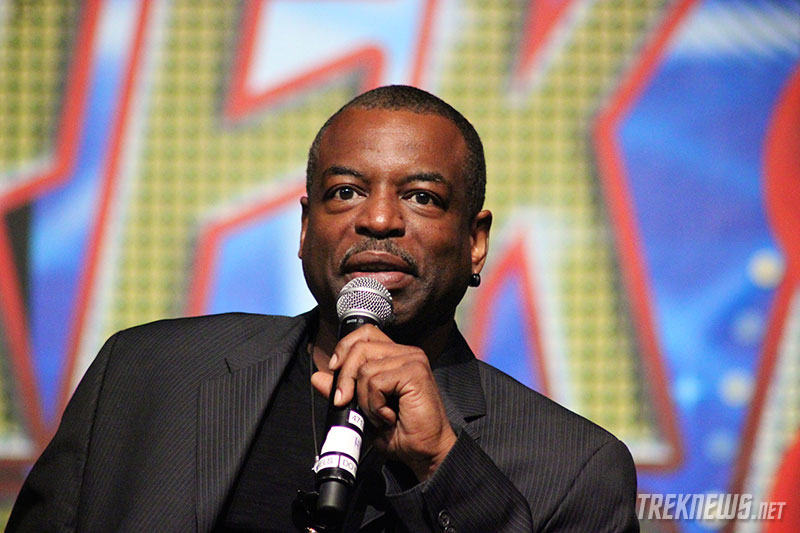 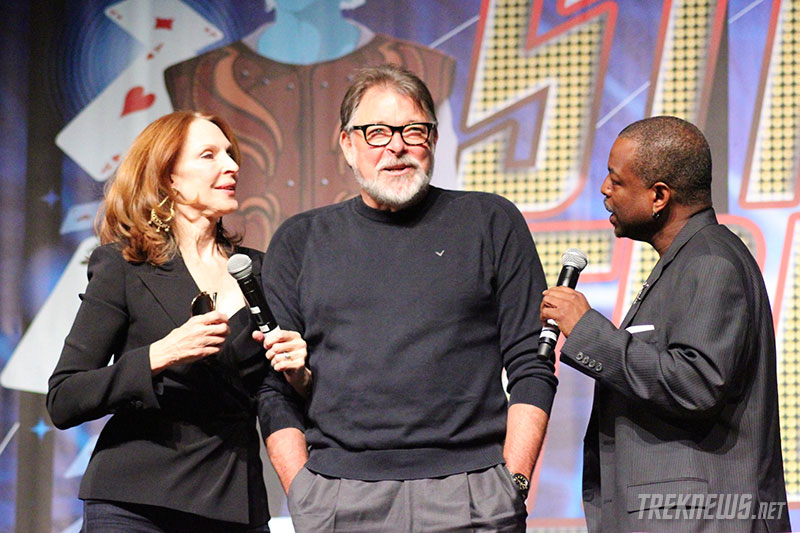 Gates McFadden and LeVar Burton were up next. The former TNG stars began their on-stage appearance by auctioning off McFadden’s communicator from First Contact. After a flurry of offers, the winning bid was $2,100. 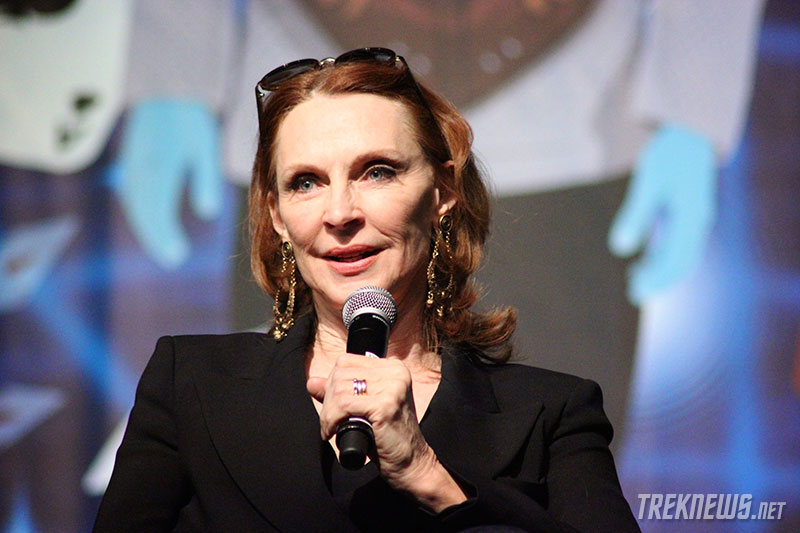 Burton discussed the Geordi character, saying that he heard rumors he was originally written to be gay — but never by anyone associated with the show. “Geordi’s kind of a creeper,” he said. On the topic of episodes, Burton picked “Code of Honor” as his favorite and “Relics” as his least. 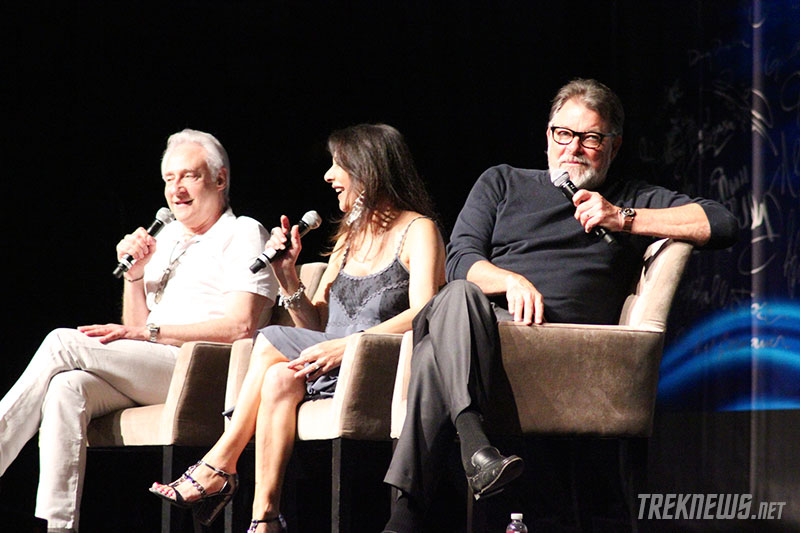 Burton and McFadden’s fellow TNG stars, Jonathan Frakes, Brent Spiner, and Marina Sirtis were up next. Frakes demonstrated the “Riker Maneuver” for the fans as he sat down on stage.

“My method is learn the lines and don’t bump into the furniture.” joked Spiner. When asked what her favorite scene, Sitis jokingly said it was her drunk scene in First Contact.

The former castmates, who had been joined on stage by Terry Farrell, bid farewell to the Las Vegas audience by saying “Thank you. We love you!” 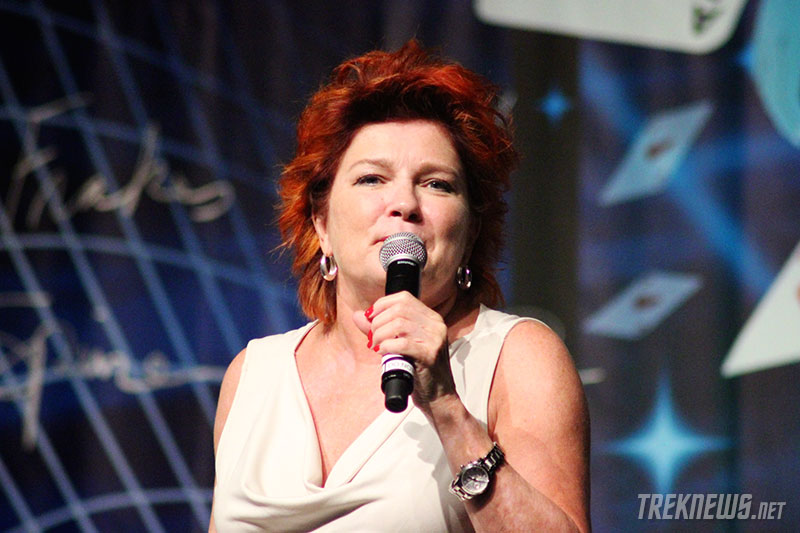 Welcomed by thunderous applause, Star Trek‘s original Captain Kirk, William Shatner began by updating the fans on his recent projects. Shatner told the fans a TNG documentary will follow last year’s release of The Captains. Never one to slow down., Shatner told the fans that he’s also working on a new album with Billy Sherwood, entitled “Ponder the Mystery”.

Kate Mulgrew joins Shatner on stage. After some brief catching up, Mulgrew discussed her new hair color, saying “Red is the new black.” Mulgrew asked Shetner what he thinks would have happened in his life if he was never cast as Captain Kirk, to which he responded “We don’t know.”

“There are things that I’m not proud of and things that I am proud of” Shatner said of choices he’s made in his life.

Discussing mortality, Mulgrew told him that she doesn’t believe he’s scared of death, but instead afraid of not living life. 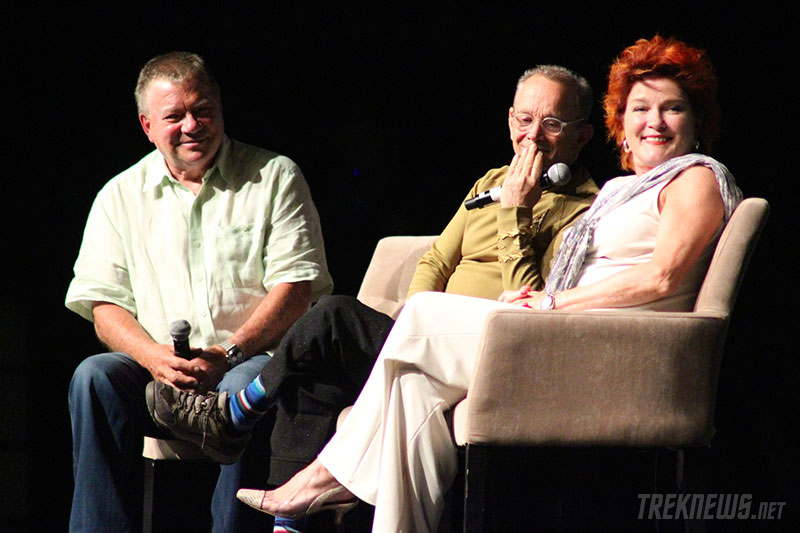 Joined by actor Joel Grey, the two discussed their Star Trek characters. “I loved her spirit — I loved that she was brave,” Mulgrew said of Janeway. 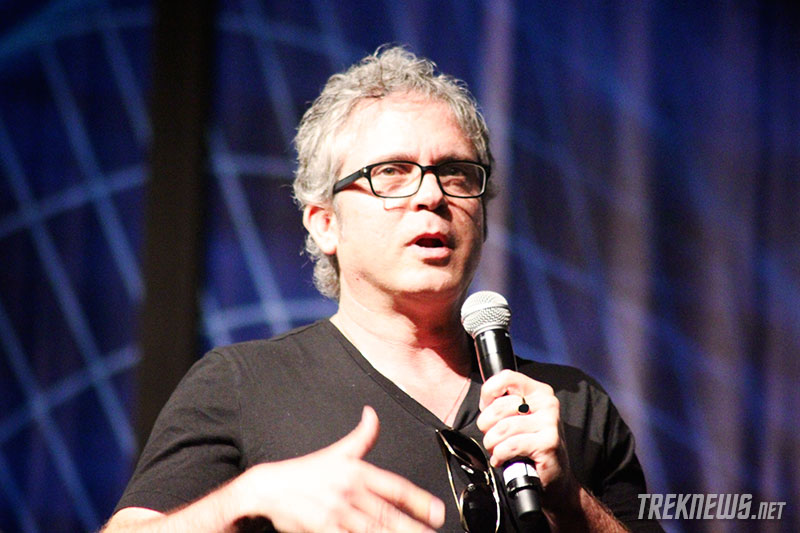 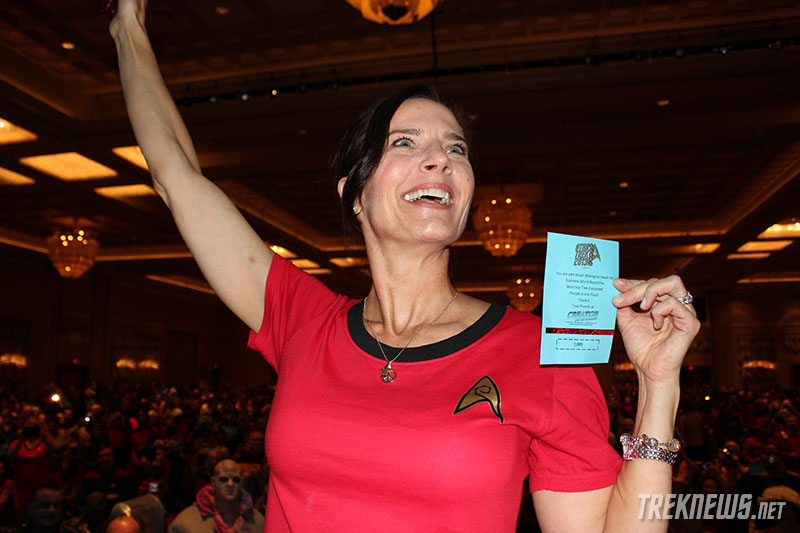 With an original record of 1,041, set back in 2011 and broken by 1,063 fans during the Star Trek London event last year, the Las Vegas fans were determined to break the Guinness Book of World Records for most people in one place in Star Trek costumes. In the course of an hour, 1,085 fans — along with DS9 star Terry Farrell — poured into the DeForest Kelley Theater to once again recapture the award.