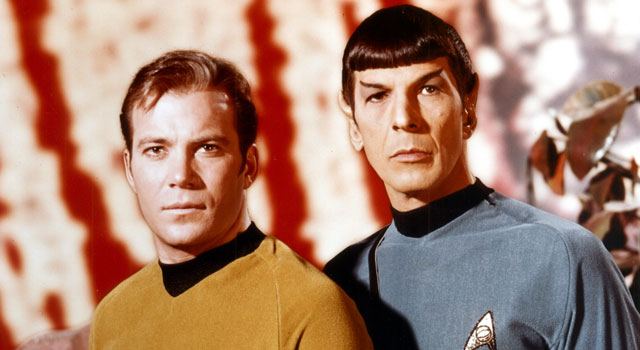 Today we celebrate the 47th anniversary of Star Trek, as the series’ first episode, “The Man Trap” aired on September 8, 1966.

Gene Roddenberry’s “wagon train to the stars” made virtually unknown actors at the time, William Shatner, Leonard Nimoy, DeForest Kelley, James Doohan, Nichelle Nichols, George Takei and Walter Koenig, into household names across the United States and around the world.

In the years since the first episode aired, we’ve seen the franchise evolve and effect the lives of so many. Star Trek has changed the way many of us create, use and interact with technology. It has spurred exploration on land, in our oceans and towards the final frontier of space. The franchise has changed the way many of us interact with other races and those with beliefs different than our own. Star Trek has shown us that while mankind may not be perfect, we can–and should–strive to be better than we were yesterday.

Below is a brief summary of some of the most important moments in the history of Star Trek, throughout the last 47 years. We welcome you to leave your own Star Trek memories in the comments section below.

June 3, 1969: The final original episode of Star Trek airs on NBC. The show was cancelled because of low ratings.

September 28, 1987: Star Trek: The Next Generation debuts in syndication. The show would continue for seven seasons.

December 6, 1991: Star Trek: VI: The Undiscovered Country is released. This would be the final film to feature the entire original starring cast.

May 23, 1994: After seven seasons, the final episode of Star Trek: The Next Generation, airs.