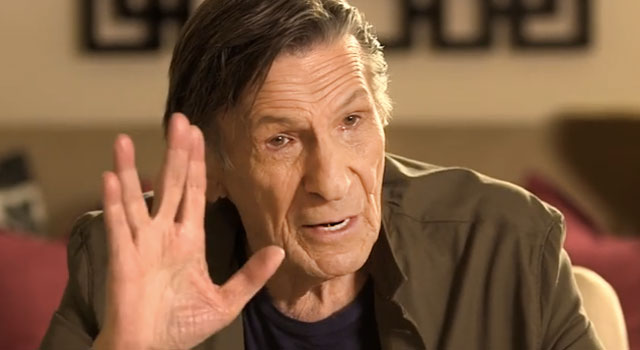 Leonard Nimoy, actor, director and photographer, recently sat down with musician , producer and admitted fan, Pharrell Williams on ARTST TLK to discuss the creation of his iconic Spock character, the Vulcan salute, and the controversy behind some of his photography projects, and more.

“I had mixed feelings about it” Nimoy said about being presented with the role of Spock. “I was excited about some steady work, because I hadn’t had some steady work in a long time. I was a freelance actor. On the other hand, I was concerned about what the make-up was going to look like.”

“The fact that Shatner was overt, was broad, and theatrical, made it more interesting for me to be able to lay back and comment on what was happening, rather than act out on what was happening. So, it took a little while, but I found a way.” he said of his on-screen dynamic with William Shatner.

On the topic of the Vulcan salute and it’s Orthodox origins, Nimoy said “I didn’t think of it in religious terms, but I was looking for some magic.”

Check out the entire interview in the video below.