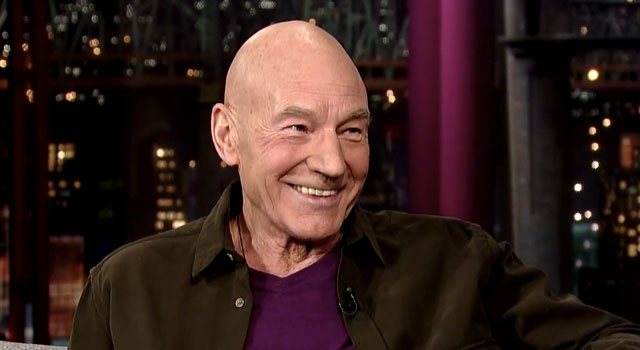 On Thursday, Star Trek: The Next Generation‘s Sir Patrick Stewart appeared on the Late Show with David Letterman.

Stewart, best known for his role as Captain Jean Luc Picard on TNG and Professor Charles Xavier in the X-Men films, was referred to by Letterman as “one of the most recognizable men in all of show business,” to which he responded by pointing at the top of his forehead and saying “from here up.”

He went on to say that he’s noticed that people with certain “occupations or professions that seem to be particularly obsessed with Star Trek.”

“If you work unseasonable or unreasonable or long hours, then the chances are that you’ll be sitting at home or in a hotel room at 4-o’clock in the morning flicking channels, and ‘Oh my god “Space, the final frontier…”, there will be.” he said.

In addition to Star Trek, Stewart discussed carrying the 2012 Olympic torch and his thoughts on the upcoming 2014 Winter Games in Sochi, Russia. Check out the videos below.