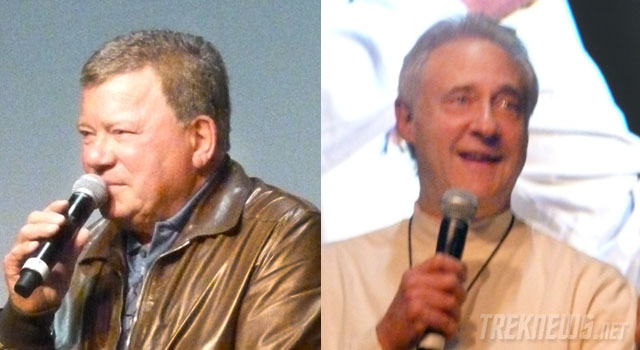 During the press conference, the Next Generation crew was asked, “Why did they get along so well as a cast?” Burton commented, “No one knows.” While Sirtis added it was serendipity. From their joking with each other back and forth it was obvious that their TNG camaraderie continues to today. 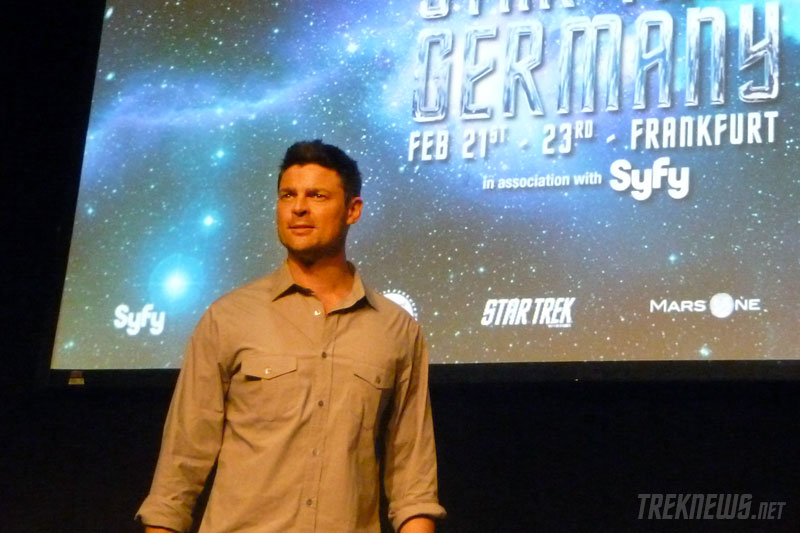 Karl Urban has been viewed by many to have captured the true character of Dr. McCoy, in the last two rebooted Star Trek movies. He was asked how he got so close to the true nature of Bones. Urban, a native of New Zealand, stated, “I grew up watching Star Trek”, and as a kid he was a big fan of science fiction.

The DSTG was held in the huge Hall #3 of the Messe convention center in Frankfurt Germany. While inside the hall one was reminded of actually being aboard a star ship as it is a very modern building. As compared to most hotel based SciFi conventions in the United States, there was lots of room for everything to fit under one roof without the claustrophobic feeling common in the states.  On the other hand, it may be a long walk from one’s hotel to the convention as opposed to rolling out of your Rio hotel suite in Vegas and heading straight down to the convention floor. 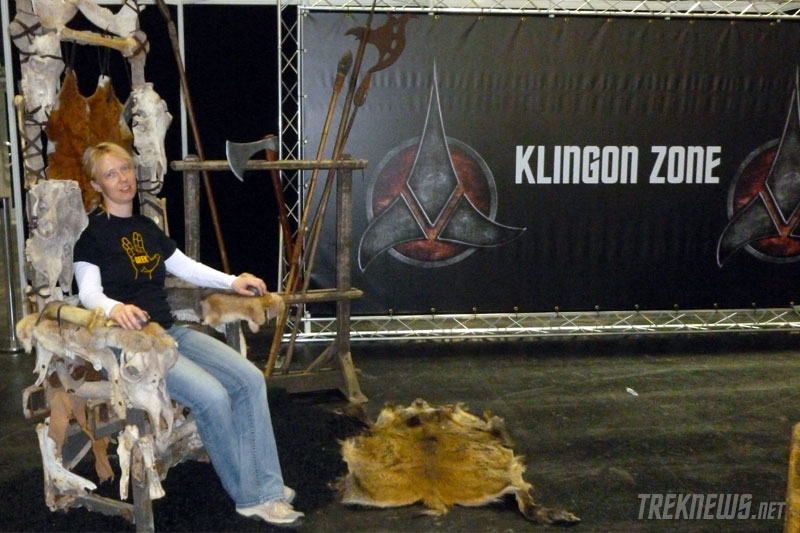 Some unique things to DSTG were: the Klingon Zone, Borg Regeneration set, and Enterprise-D bridge, with the last two reserved for paid photo shots.  Both Friday and Saturday nights finished with Trek themed parties at an added cost but based upon reports they were received with mixed reviews.  Alas jet lag and middle age prevented me from taking part.

Day two of Destination Star Trek Germany quickly got going with morning talks consisting of the TNG cast, followed by Karl Urban, the Enterprise comedy duo of Trinneer & Keating, William Shatner, the DS9 team, and the night’s highlight with Shatner moderating the TNG reunion event. The hall was noticeably more crowded with the Saturday fans turning out in force. Shatner’s afternoon discussion was most touching and sad when he told of his one year old Doberman puppy, Mocha, being put to sleep just that morning. He was obviously still grieving. Mr. Shatner told the audience that death is part of life plus he wanted to keep the memory alive of this beautiful dog.

Wandering through the vendor’s area one is struck by how few there are, as compared to events in the United States. At the same time these venders did have a larger footprint and more merchandise vs. the domestic events. One of the most interesting and unique vendors was Martin Netter from Germany. In addition to his business of selling Trek goodies, his vast collection of original Star Trek props, wardrobe, and scripts formed the museum exhibit. It was fascinating viewing these Trek artifacts and added a unique draw for the convention.

Appearing daily on Stage B was the UK’s Trekkie Girls, Sam and Carole who are YouTube experts on all that is Trek. They kept the crowd entertained with their insights into the “Ladies of Trek” as well as a rather challenging trivia smack down. Finding out there was to be no costume contest; the Trekkie Girls boldly went where no girl has gone before and took it upon themselves to organize a contest for those dressed up as their favorite Trek characters. So kudos to Trekkie Girls! 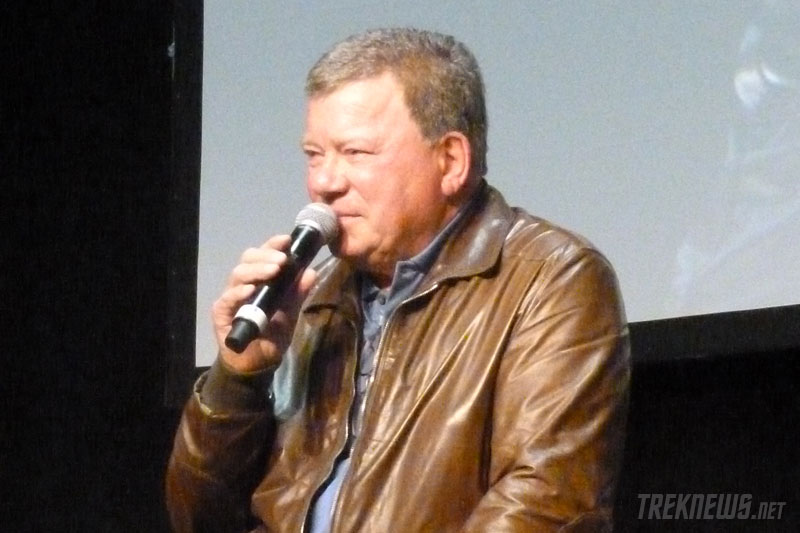 Saturday night was capped off with the patriarch of Star Trek, William Shatner, acting as the moderator of the TNG Reunion. The mood was set at the start when Shatner repeatedly expressed his lust for all aspects of life. When asked by a fan if they were stranded on a deserted island who, from the TNG characters they would choose to be with, it went downhill fast. The ladies showed their intelligence with Gates having Wesley look after her and Marina selecting Dr. Crusher to take care of her medical needs. Michael Dorn showed his masculine side in refusing to answer as his mind was overwhelmed by all sorts of lustful thoughts according to his costars, thus making him mentally and physically unable to participate in the rest of the discussion. Marina then kissed up to LeVar Burton and thus he selected her to be with him on the island. Shatner then jumped in and said he would choose to be stranded with LeVar so that he could then be with Marina. 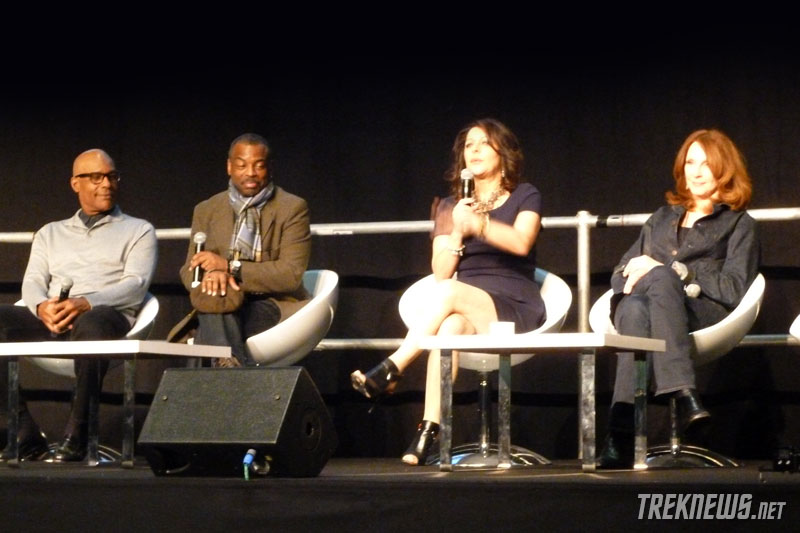 Sir Patrick Stewart then made an appearance as he channeled his consensus into Brent Spiner’s most excellent imitation of his majesty. The silver haired Spiner then got the audience laughing their backsides off with his all too accurate spoof of Sir Patrick. When talk turned to Asia, Marina in her typically restrained, introverted, and soft spoken manner, chastised China and Japan for their abuse of animals. For the rest of the talk she frequently mentioned the sake of the dolphins. Kudos number two to Marina. The group’s collective banter, humor, and camaraderie capped off another fun day at DST Germany.

The final day of the convention started off strong Sunday morning with Brent Spiner on Stage A talking about the subject he loves best, Brent Spiner. As always Herr Spiner keeps the audience in hysterics as he makes fun of himself, former cast members, stories of the TNG set, and his general twisted yet enjoyable view on life. The always reserved and shy Spiner got the crowd laughing by proclaiming, “I’m a brilliant human being.” When asked what was his favorite episode, he recalled “Brothers”, as it afforded him the opportunity to work with his favorite actor, namely himself as Data, his evil brother Lore, and his father Dr. Noonien Soong. 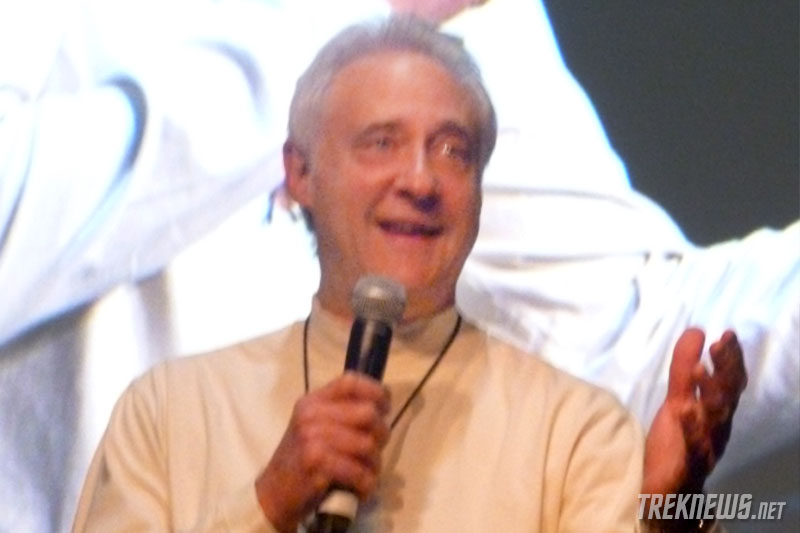 Brent Spiner was then kind enough to lend a helping hand by pranking the next stars on Stage A, Michael Dorn and Marina Sirtis. Posing as Helmuth from Germany, Spiner asked Michael Dorn if, “In real life are you an idiot as you were in the show?” Confusion, realization, and uncontrolled laughter were the reactions of both Dorn and Sirtis as they struggled to keep calm and carry on. Marina then went on a tangent of her love for the Tottenham Hotspur, one of London’s five soccer teams that yet again finished behind London’s premier team Arsenal. Having a Hotspur tattoo on her shoulder she is truly a fanatic and proceeded to mad mouth the German national soccer team, who by the way utterly destroyed England 4 – 1 and sent them back home with their tails between their legs in disgrace during the last World Cup in 2010. Marina, better luck this summer in Brazil. 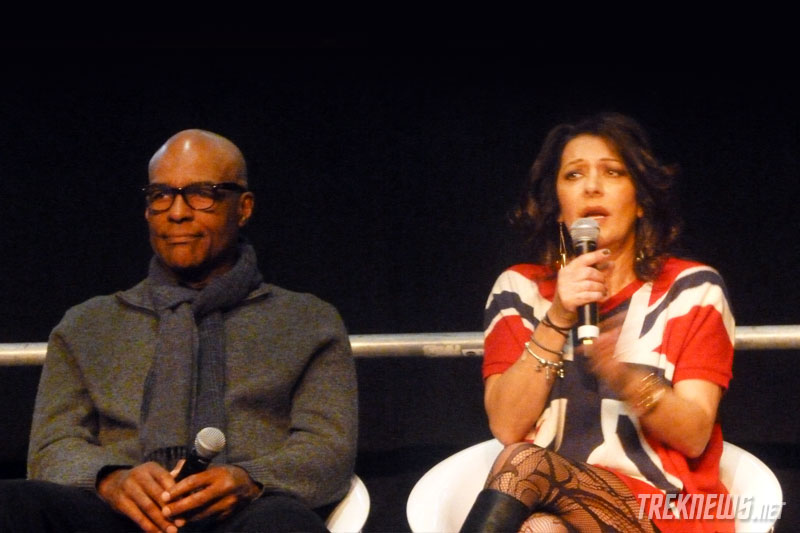 Karl Urban, the best damn Dr. McCoy since Bones, was a hit who brought us all into the present and future of all things Star Trek. Standing before a sea of uber geeks he was asked what he was geeking out in general. In reply, “I love live music.”, and he was soon to see the godfathers of rock, the Rolling Stones. Asked about his bucket list, Urban mentioned: owning a Porsche, travel, spend as much time as possible with his family, and laughing until it hurts.

Queried in regards to his icons, he first mentioned: Steve McQueen, Paul Newman, Harrison Ford and Leonard Nimoy. Later Urban changed tracks and spoke about his real life heroes such as: the 9-11 fire fighters who ran into buildings as others ran out, New Zealand’s Rob Hall an Everest guide who died trying to save his clients lives, and Ernest Shackleton whose inspiring leadership saved his entire expedition from the Antarctic ice. Whilst he is of course a top shelf Hollywood star, me thinks Karl Urban is also a very human and real person one could easily call friend.

Many of our favorite DS9 crew took the stage to not only entertain us with Trek nostalgia but also to highlight just how talented these actors are. Rene Auberjonois was kind enough to highlight a comment of Armin Shimerman, “Our bench was deep.” In contrast to other Trek TV series the talented DS9 costars could and often carried episodes on their own without the leading cast. When asked if there will be a DS9 movie, they collectively shouted “NO!”.

Warping up the convention were BFFs Connor Trinneer and his trusty sidekick Dominic Keating of Enterprise. The two Enterprise “boys” kept us in rapture with their insights into Enterprise, yet their comedic connection was obvious not only as cast members but also as friends. When asked about the premature demise of Enterprise both commented about the politics between Paramount, CBS and the defunct UPN. Talk about bad timing for Enterprise and all Star Trek fans! As Connor “Trip” Trinneer was asked if he was ever surprised by what the writers produced he mentioned being pregnant in “Unexpected” and “These are the Voyages” where Trip dies. His sidekick Dominic was more than happy to take credit for putting forth the plot for both episodes.

Where does the Destination Star Trek journey lead us in Europe? Media 10 Ltd., the company behind Destination Star Trek Germany, successfully launched the events in October 2012 launch of Destination Star Trek London. While speaking with Media 10’s Marketing Director Rob Nathan, I was told that they are in it for the long haul and have signed a contract with CBS, to authorize them to promote the Star Trek branded conventions in Europe. It is a very good sign that they have the pockets to continue and expand their Star Trek convention business in Europe. All too often many Trek and SciFi conventions die after just one event. Nathan stated that, “We are not one hit wonders.” Two years ago, DST London had 18,000 individual customers buy tickets, while there were over 30,000 visits during the three day convention. While not official, DST Germany has taken in approximately 8,000 tickets with 10,000 visits. In comparison to conventions in the US — one must compare and contrast the experience in the American hotel format favored by Creation Entertainment and the vast convention hall venue of Media 10. To be honest both have their positives and negatives. American hotel venues allow one to experience everything in a concentrated space and the opportunity to roll out of bed into the convention fun, whilst the Media 10 format provides a vast area for everything without the crowds yet your night’s lodging might be trek away.

I truly enjoyed the space afforded by the cavernous Messe Hall #3 and did not miss the jam packed crowds of the US hotel formats. However, putting everything under one continuous space left something to be desired. For example the acoustics were not the best. The events on Stage A continually interfered with that of Stage B and likewise. Also in the Klingon Zone there was a 4 foot diameter gong that interrupted the actors and various events throughout the entire convention. NO MORE GONG, Media 10! On the other hand, the extra room allowed for the autographs and the star photo ops to be very well organized.

Media 10 is in it for the long haul. Nathan expects there will be another Destination Star Trek within the year and most likely to be held somewhere in the United Kingdom. All in all DST Germany was a solid Star Trek convention and I’d give them a B+. I look forward to attending the third Destination Star Trek sometime next year. 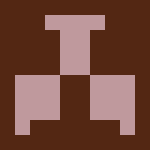