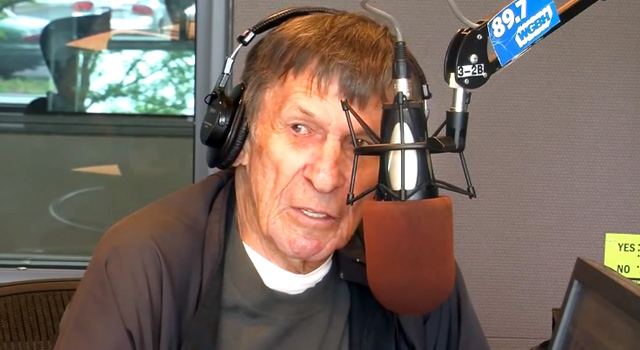 WATCH: Leonard Nimoy On Growing Up In Boston and Spock

Leonard Nimoy, who recently hosted Out of This World with the Boston Pops and was recognized by the National Academy of Television Arts with a Governer’s Award, sat down with Boston Public Radio to discuss growing up in Boston, how the city has changed, his ever-present connection with it and his son Adam’s new documentary, Leonard Nimoy’s Boston.

“I still have a great connection with the city,” Nimoy told Margery Eagan and Jared Bowen of WGBH.

Discussing the absence of his Boston accent, Nimoy said “When I left Boston, if you had asked me what part I played in the TV show, I would have said ‘I was Spahk on Stah Trek'”

“There’s more to it than just the sound, [there’s] a whole psychological thing about the way you sound and I really didn’t want to let it go, I thought ‘this is who I am,’ but then I though I better change my speech, because it’ll make it possible for me to get different kinds of work” Nimoy said.

On the topic of Spock, Nimoy said “I was very fortunate to find a role that welcomed me and I welcomed it. I took it to heart. I was very serious about that character. I identified with him a lot. Spock was a character who was sort of outside the mainstream.

Watch the entire interview below.