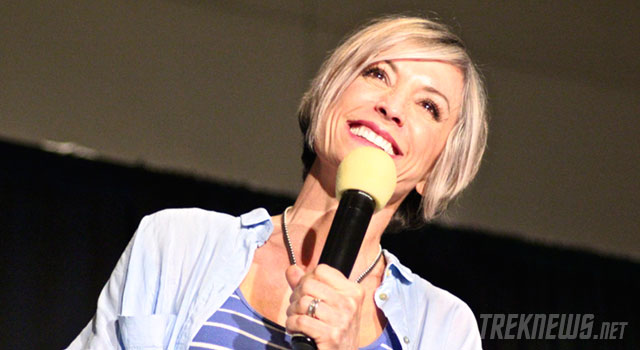 In addition to the previously announced cancellations of Kate Mulgrew, Scott Bakula, Karl Urban and Bruce Greenwood, fans were disappointed to find out on Saturday that Avery Brooks had also pulled out for unannounced reasons. Acting quickly, convention organizers were able to replace Brooks with fellow DS9 star Nana Visitor on Sunday for photo ops, autographs and an on stage appearance.

It should be noted that following each of the guest cancellations, Creation had announced replacements on their website. Those included Walter Koenig, Dominic Keating, Connor Trinneer, JG Hertzler, Robert O’Reilly, Garrett Wang, Robert Picardo and John Billingsley,

The two-day event kicked off on Saturday with a special screening of William Shatner’s latest documentary Get A Life and a 50th anniversary showing of the classic TOS pilot “The Cage”. 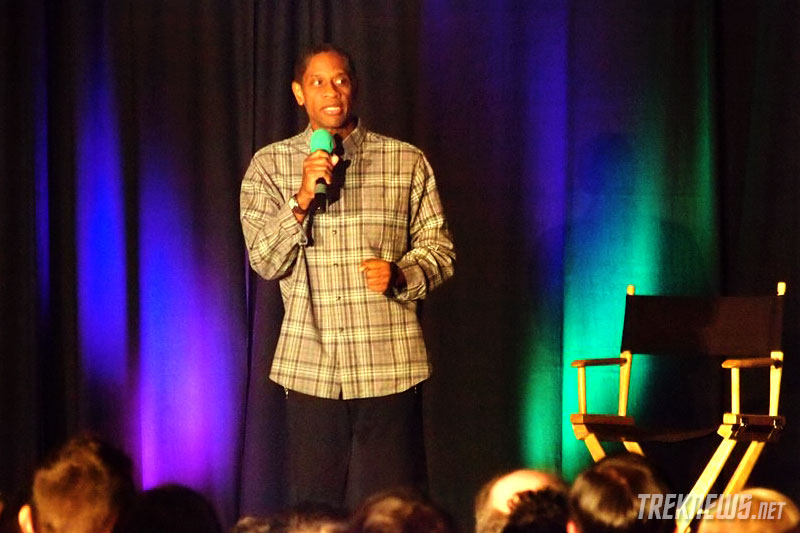 Next up was Voyager’s Tim Russ, who talked progress on Star Trek: Renegades. After close to six-months the Kickstarter-funded project is in post-production as the team works on CG special effects

Convention goers were then treated to a rare on-stage appearance by JG Hertzler and Robert O’Reilly as Gowron and Martok in full Klingon makeup and wardrobe. Demanding a full-sized Bird of Prey or a pastrami sandwich, the Klingons entertained the crowd with their in-charachter antics. 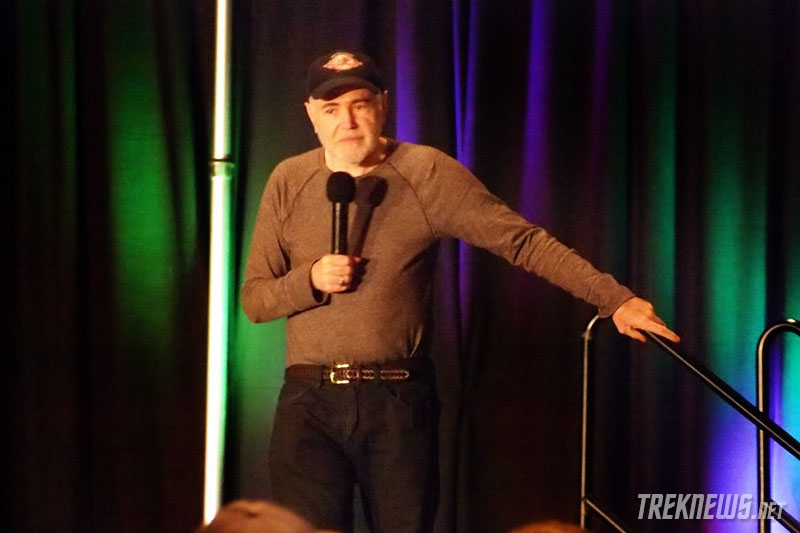 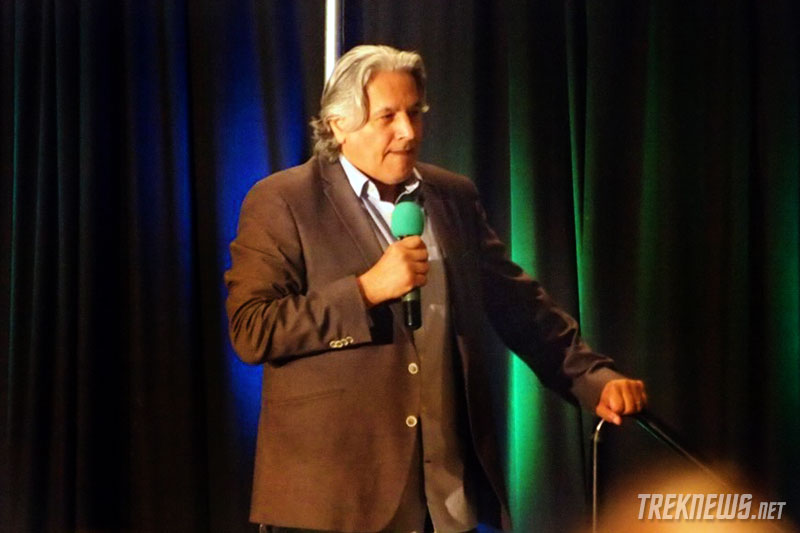 Montgomery discussed his personal life since Enterprise went off the air, including being married, divorced and the birth of his child. He went on to talk about his graphic novel “Miles Away” and how he gets kids to move out of troubled circumstances throughout the excitement of reading. Mayweather went on to discuss his time as Ensign Travis Mayweather, during the show’s four-year run. 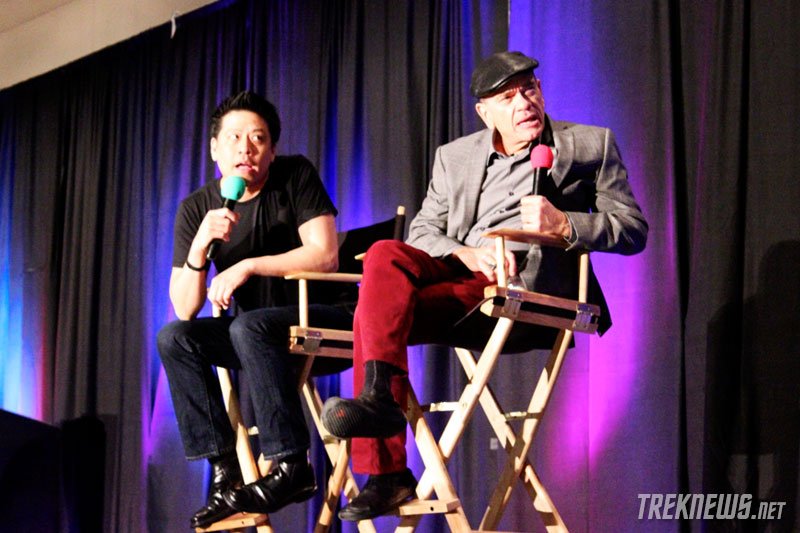 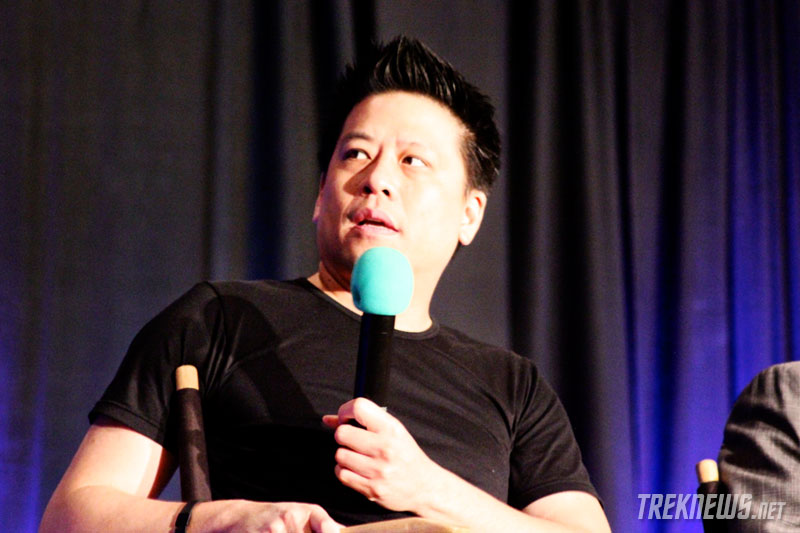 Robert Picardo was joined on stage by Voyager castmate Garrett Wang. The two joked with the crowd and took questions from audience members. When asked what his least favorite episode was, Picardo mentioned “Twisted” from the show’s second season and began acting out sequences on stage with Wang. 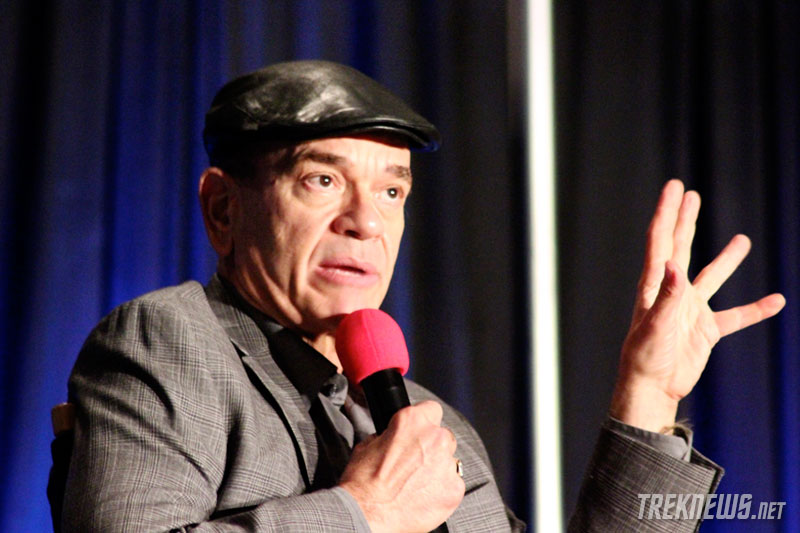 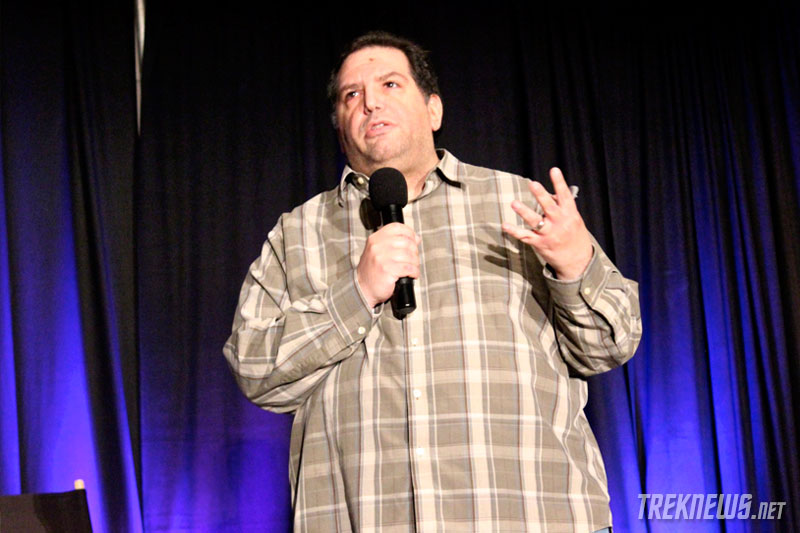 TrekNews.net contributor John Tenuto was up next. Sharing several behind-the-screne photos from the filming of Star Trek II: The Wrath of Khan direct from director Nick Meyer’s personal collection, Tenuto’s presentation gave a rare glimpse into the camaraderie and friendships that were formed while shooting the 1982 film. 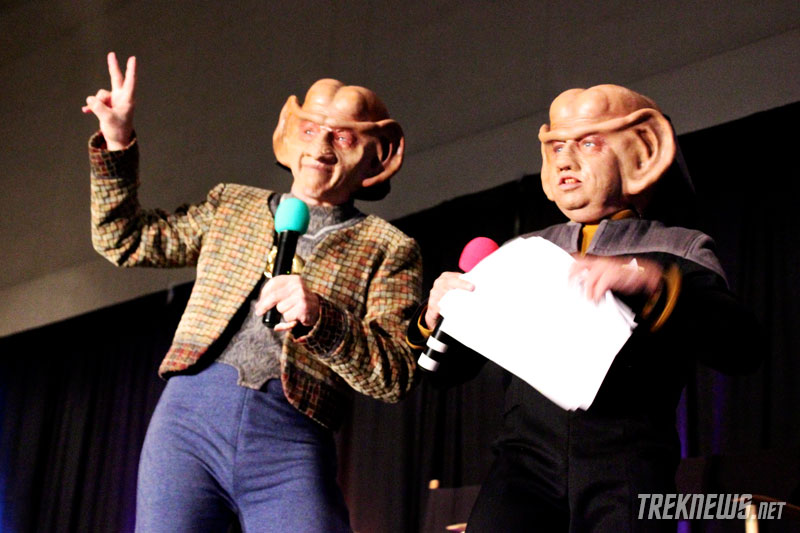 Max Grodenchik and Aron Eisenberg as Rom and Nog 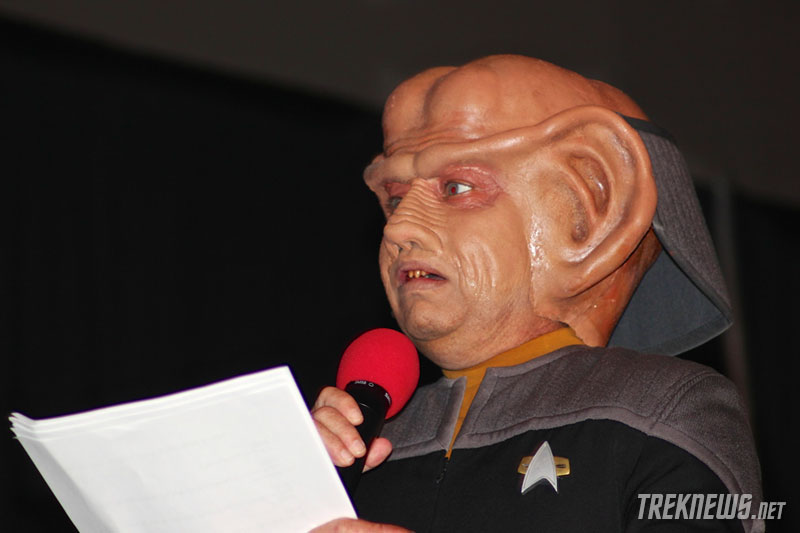 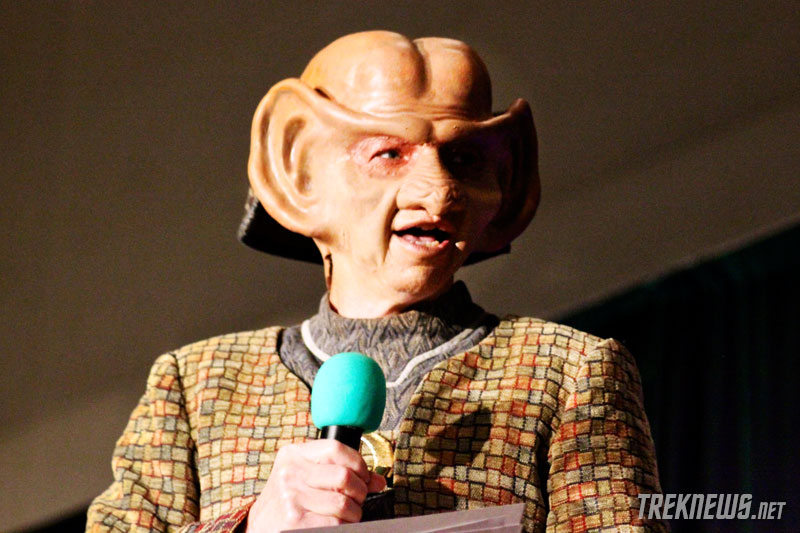 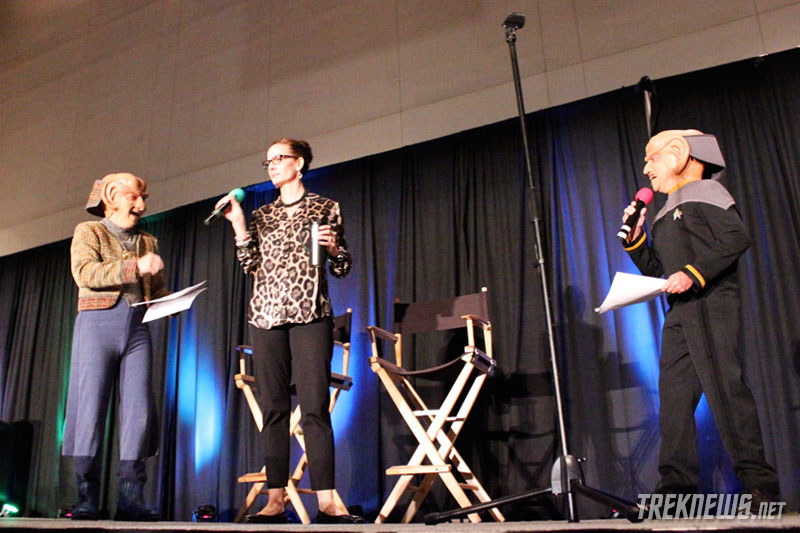 Much like Hertzler and O’Reilly the previous day, Max Grodenchik and Aron Eisenberg appeared on stage in full Ferengi garb. Eisenberg and Grodenchik, who initially had some issues with his Ferengi teeth, read from a script and did some comical improv for the audience. Their time on stage even included a rap song by Grodenchik, calling himself “Rom DMC”.

DS9’s Terry Farrell was up next. 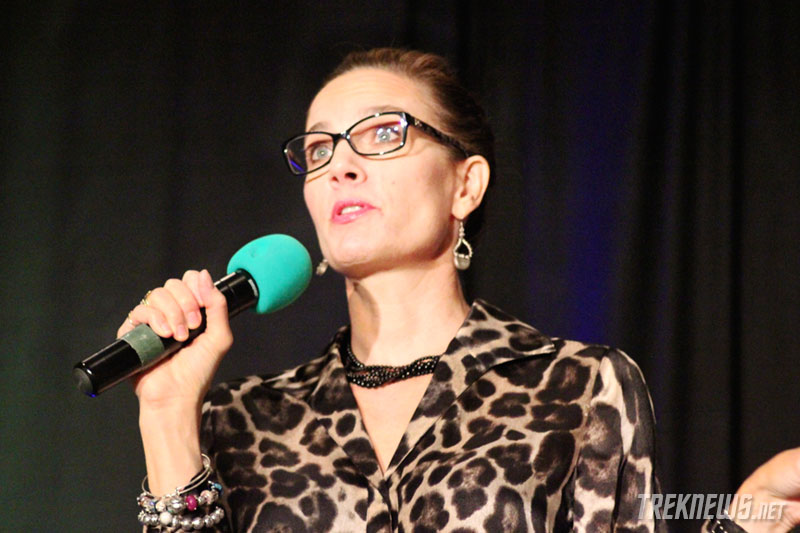 Farrell admitted she was disappointed not to see Avery Brooks this weekend, but excited to see her DS9 co-star Nana Visitor instead.

On the topic of her fellow DS9 actors, Farrell candidly said that she “could have had a couple babies on that show”, if she wasn’t worried about “eating where she sleeps,”.

She told the crowd that she received a Klingon Bat’leth as a gift, “don’t come knocking at my door, I will f**k you up,” she joked.

Talking about her departure from the show, prior to the final season, “I wish we could have played it out like adults” she said of the disagreements she had with Rick Berman. She went on to acknowledged that Nicole de Boer did a great job in the role of Ezri Dax. 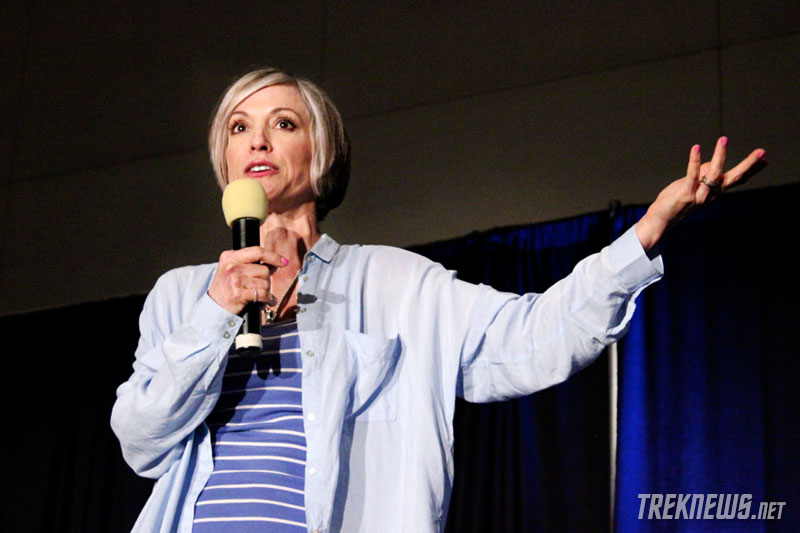 Nana Visitor, who flew in from New York as a last-minute replacement for Avery Brooks, was welcomed to the stage. Sporting a blonde pixie haircut, she thanked the Boston crowd for being so warm towards her throughout the day in place of Brooks.

She shared with the audience that she always wished she got to hear the Deep Space Nine theme while walking through the promenade and said the show made her think about things she wasn’t used to thinking about.

“The show changed me,” she added.

Taking questions from the audience, Visitor said she overcompensated while she was pregnant on the show, because she didn’t want to lose her job.

“I used to have dreams of being captured by Cardassians,” she said.

The convention will not be back in Boston next year. Instead, Creation has teased a very special return in 2016, to celebrate Star Trek’s 50th anniversary. 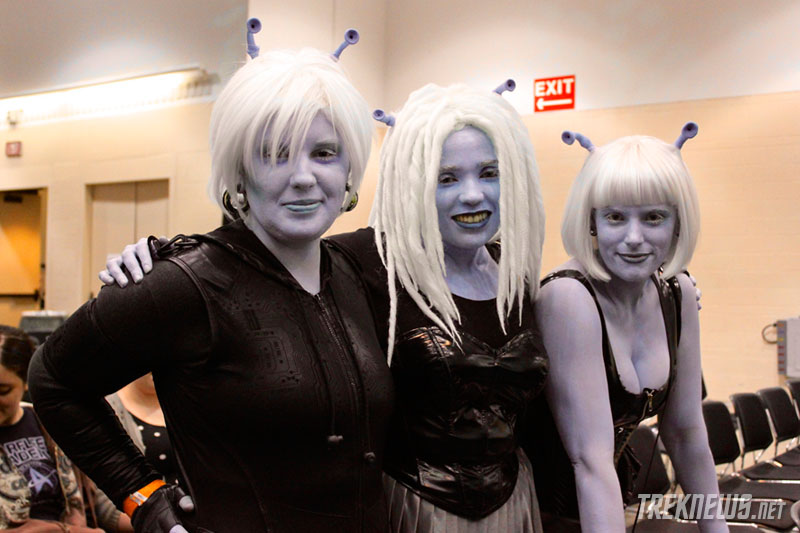 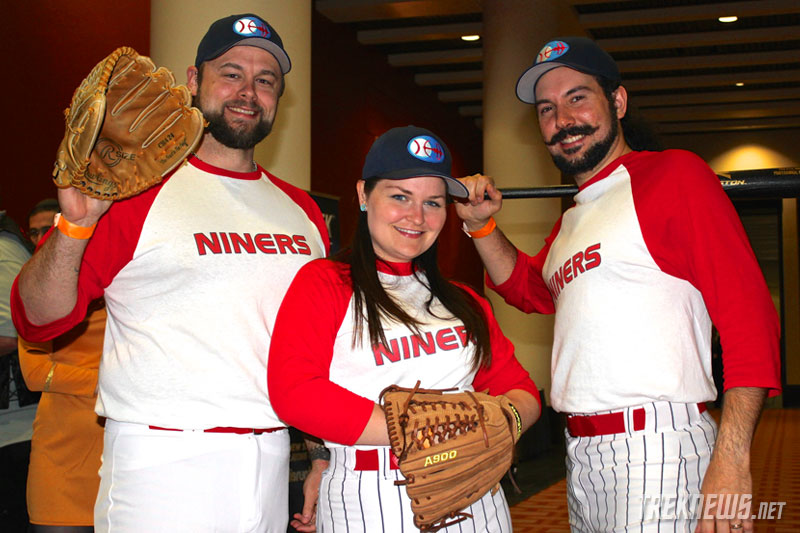 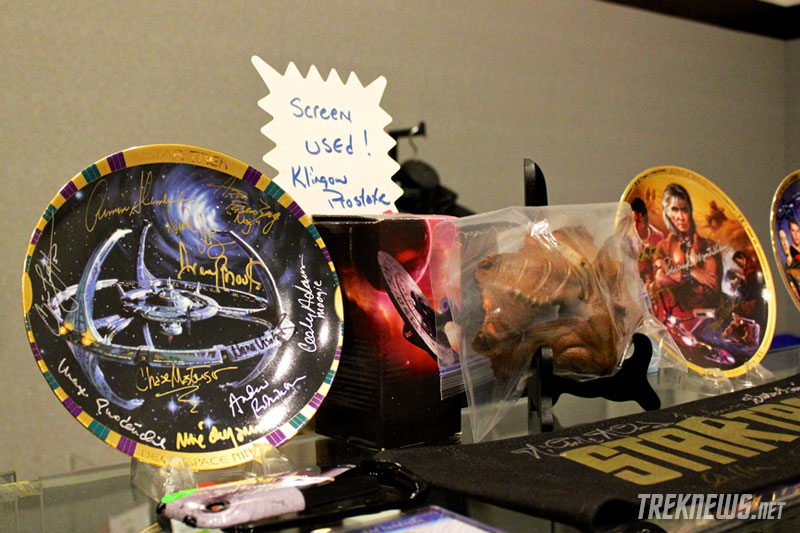