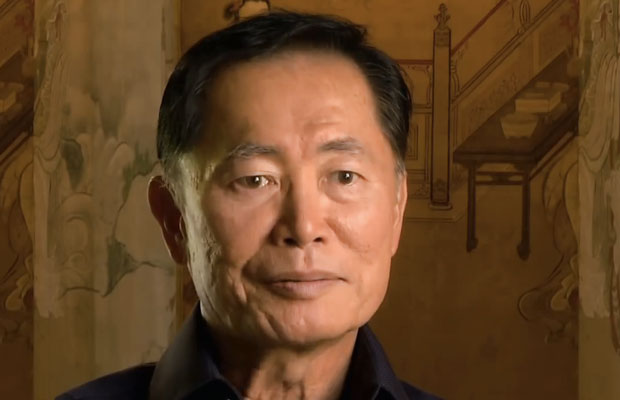 While many of you know George Takei for his work on screen, he also lives an extraordinary life away from the cameras. That life is now the subject of a documentary from celebrated director Jennifer Krootz, called To Be Takei. The film looks at Takei’s entire life, from his less than idyllic childhood, his years on Star Trek, to his current role as internet celebrity and civil rights advocate.

From July 3rd through August 5th, DirecTV will be exclusively airing the documentary both on demand and streaming (check their website for details). Following that, the film will hit U.S. theaters on August 22nd.

The film begins with Takei’s childhood in Southern California. Born in 1937, the dawn of WWII, neither him nor his Japanese-American parents had any inkling that events taking place a world away would soon have a devastating impact on them. Soon after the bombing of Pearl Harbor in 1942, the U.S. government detailed thousands of Japanese-American citizens, including the Takeis, and placed them in internment camps. From the age of 5, until he was 8, Takei was a prisoner of the Federal Government – his only crime being his ethnicity. It’s clear in the documentary that this incredible abuse of power and violation of rights was what sparked Takei’s passion for equality and justice.

Following his family’s release from captivity, Takei focused on his studies and proved to be an outstanding student. He received his BA and MA in theater from UCLA and also studied at Sophia University in Tokyo, the Shakespeare Institute in Stratford-upon-Avon in England, and the Desilu Workshop for acting in Hollywood.

Despite immense dedication to his acting, parts for Asian-Americans were few and far between. While he managed to land small, often uncredited roles in shows like The Twilight Zone, Playhouse 90, and General Hospital, his roles were either bit parts or stereotypes of Asians. That is, until he was cast in the pilot of a then-small show called Star Trek. As Sulu, Takei finally broke into Hollywood and established himself as a professional actor. While the original series only lasted for 3 years, Takei has reprised the role of Sulu many times in various other films and series within the Star Trek franchise.

Takei was mainly known for his work on Star Trek, that is until he decided to publicly come out in 2005. For a 68 year old beloved actor to come out of the closet, at a time when the battle over gay marriage was beginning to dominate political discussion, was a bold and powerful move. From there, Takei immediately began campaigning for marriage equality. In May, he was honored by GLAAD with the Vito Russo Award for media professionals who make significant differences in promoting LGBT equality.

RELATED: WATCH: “To Be Takei” Trailer

Around the same time, Takei also began his campaign to improve Japanese American relations, and even helped found the Japanese American National History Museum in Los Angeles. For his efforts, he was awarded the Order of the Rising Sun by the Japanese government. As if that weren’t enough, he also created a musical based on the treatment of Japanese Americans during WWII, called Allegiance, which premiered in 2012 and is expected to debut on Broadway within the next year or two.

Despite all of these accomplishments, Takei is never one to take life too seriously, and his career resurgence as an internet comic personality is given equal time within in the film. He joined Facebook in 2011 as a way to communicate with his fans and spread information about his causes, but it is his trademark tongue in cheek humor that has earned his Facebook page’s over 7 million likes.

Not only do we get to see Takei’s success in his advocacy and career, the film also introduces us to his success in love with husband and partner of 25 years, Brad Altman. It’s a personal side many have not seen, and it is refreshingly endearing to see Takei and Altman bicker like any other married couple (of course, not many husbands have George’s quick wit). In all, the film is an interesting and unique take on the traditionally stoic genre of documentaries. It’s light hearted without being frivolous, and touches on deep subjects without dwelling on them. For both fans of Takei and lovers of a good documentary, it’s worth checking out.