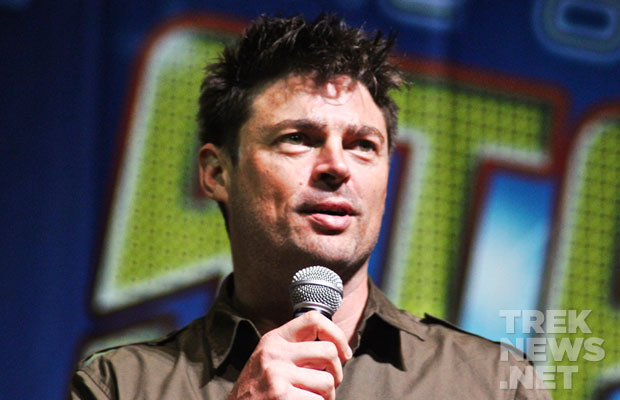 Fans were pleasantly surprised with the technological upgrades and free photo op areas provided by Creation this year, including high-definition screens, functional Enterprise doors for the guests to walk through on stage, a house band (Five Year Mission) playing between panels, a full-size Guardian of Forever prop and a TOS-style transporter platform. Additionally, one of the ballrooms was converted into “Quark’s Bar”, where convention-goers could stop in for pre-made sandwiches during the day and alcoholic beverages at night.

High-definition screens on each side of the main stage, the house band Five Year Mission playing between panels, functional Enterprise doors for the guests to walk through on the stage, plus free photo op areas for fans–including a full-size “Guardian of Forever” prop and a TOS-style transporter platform were all welcome additions. 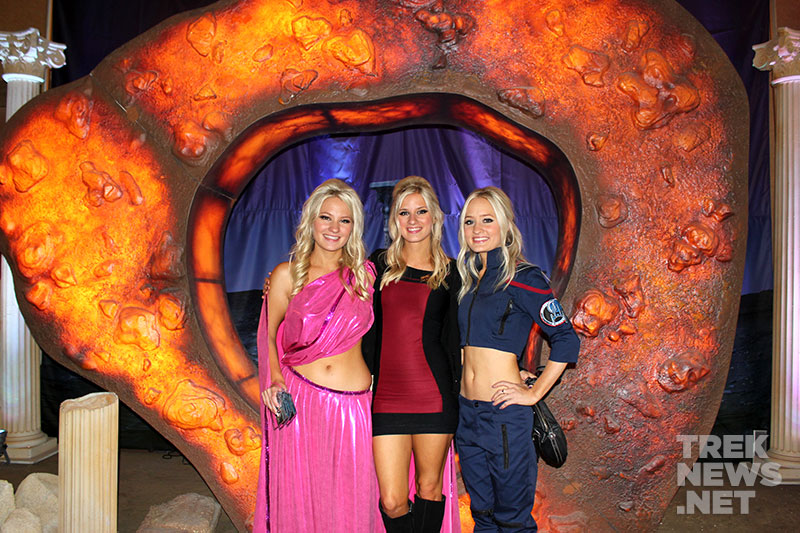 Creation co-owner Adam Malin welcomed the fans in the Gene and Majel Roddenberry Theater, saying “For those here for the first time, welcome to the community,”. He went on to inform the crowd that John de Lancie, Scarlett Pomers and Avery Brooks would not be appearing as originally scheduled. 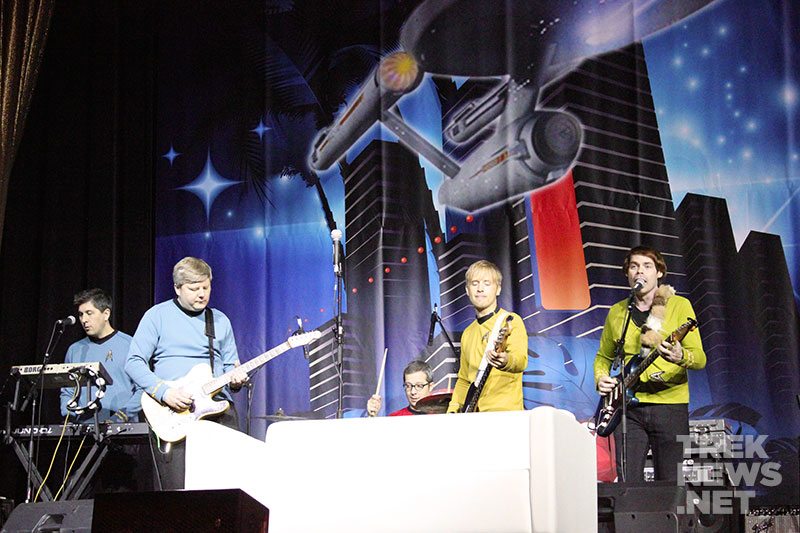 Five Year Mission, who worked as the house band for the four-day event, played a few of their TOS-inspired song preceeding David Gerrold’s onstage appearance. Gerald, author of the classic Star Trek episode “The Trouble With Tribbles”, focussed the discussion on fan films, the new movies and the convention experience. Criticizing J.J. Abrams’ Star Trek films and the majority of fan films, saying they were too heavily focussed on war and fighting and not Gene Roddenberry’s vision for the future. 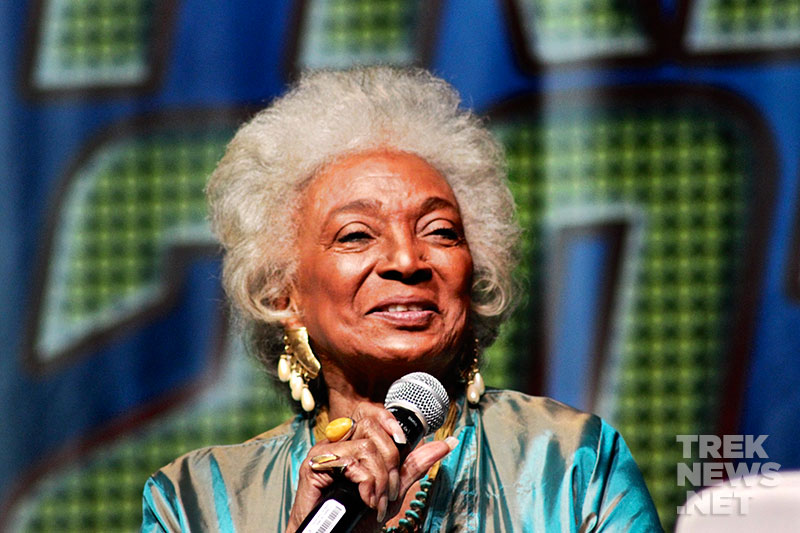 Next up, Nichelle Nichols took the stage. Interviewed by Malin, Asked how she kept her skin looking so good. “Ivory soap and water,” she answered. Looking back on the legacy of Star Trek, Nichols said “I can’t believe it’s 50 years of anything,”

“It’s something that Gene Roddenberry gave as a gift to the world, Star Trek.” she said.

The first of two TNG panels was up next—featuring Brent Spiner, Michael Dorn and LeVar Burton. 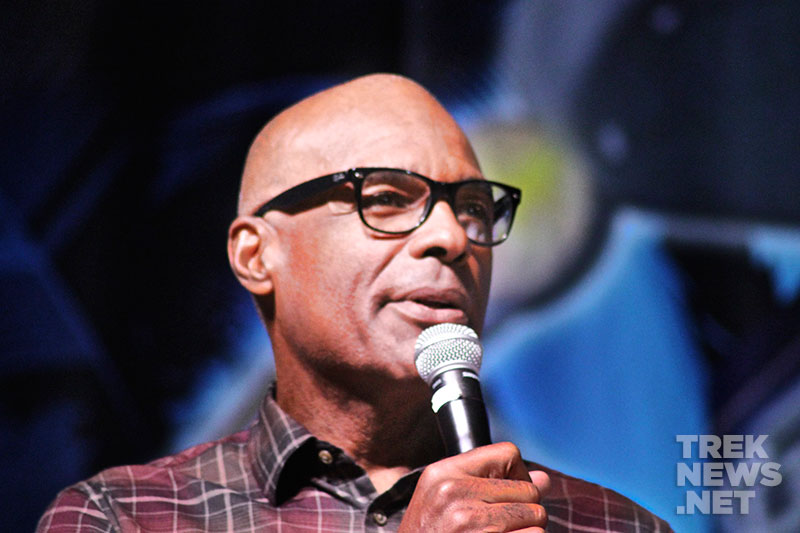 Asked about his “Captain Worf” project, Dorn said it was something that had been proposed to the studio a few years ago, but “you know the business.” Brent Spiner told fans that if they wanted to see a new Star Trek series on TV, they should write to CBS and let them know.

Note: For more on Dorn’s proposed project, check out our interview with him from 2012. 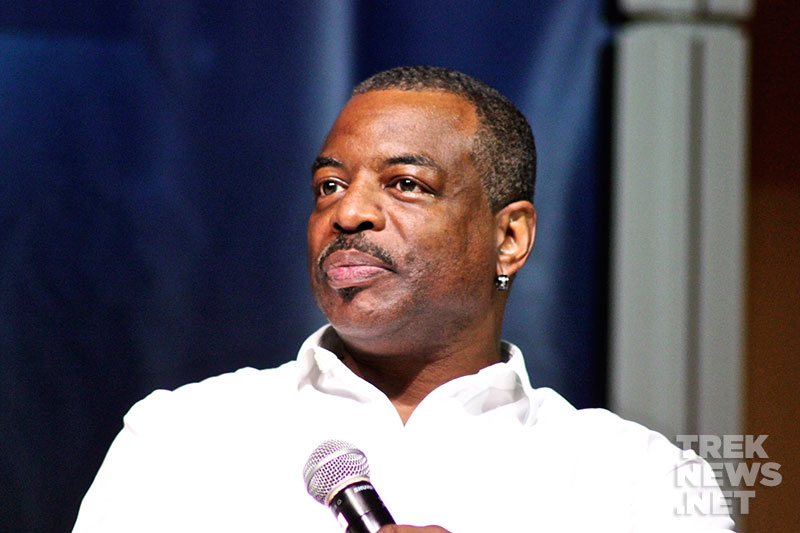 When asked which of his iconic characters was more culturally significant, Burton chose Kunta Kinte from Roots over Geordi La Forge.

Discussing Reading Rainbow‘s massive success on Kickstarter which raised $6.4 million, Burton told the audience: “It’s going to do a lot of good for a lot of kids going forward.”

During the panel, the TNG castmates realize Nichelle Nichols was signing autographs just off stage. After saying hello, the three of them welcomed her up there with them. Nichols joined them just long enough to kiss and hug each of them. “She just likes to kiss the boys.” Dorn joked. 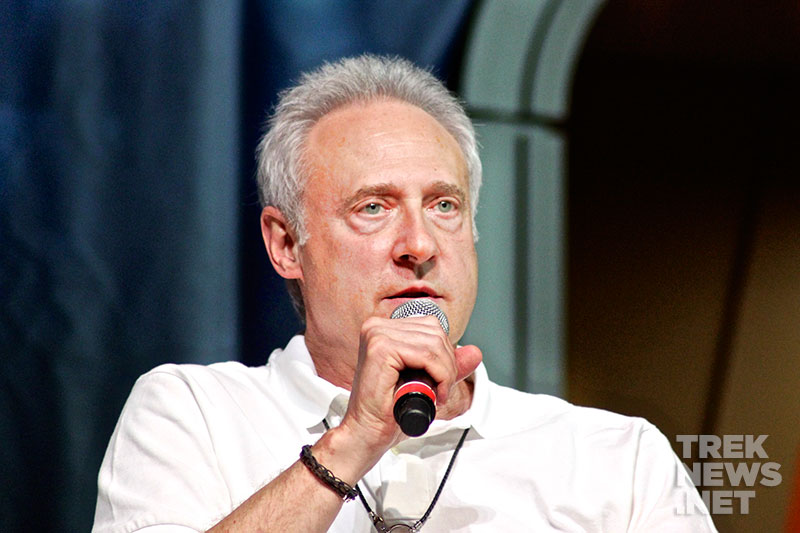 “I have no memory of it,” Spiner joked of his time on Star Trek: The Next Generation. He said he recently caught his son watching old episodes from the first season.

Burton told the crowd that he occasionally watches old episodes of the show and loves it, but doesn’t remember making them.

After a brief on stage visit by fellow TNG castmate Marina Sirtis, the three bid farewell to the Las Vegas crowd.

Star Trek (2009) and Star Trek Into Darkness star Karl Urban was up next. 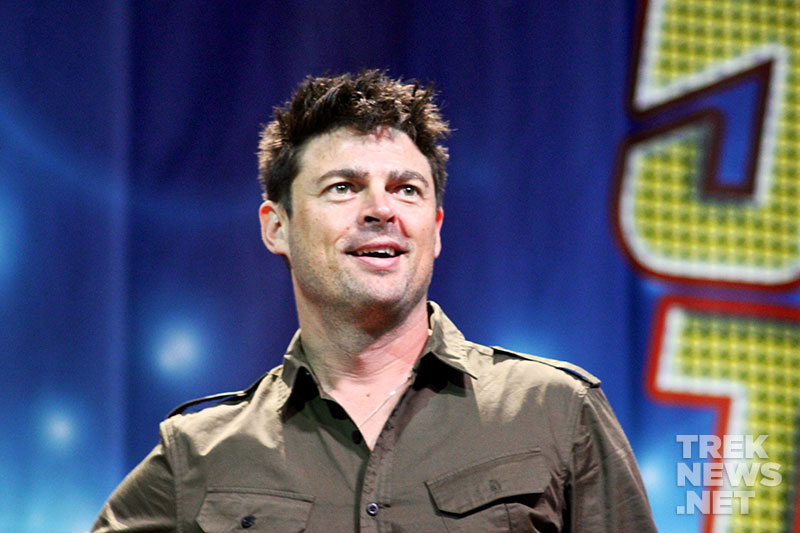 “I’ve only been in Las Vegas for 24-hours and I’ve already lost weight–in my wallet” Urban joked.

He said he wasn’t on Twitter yet, but would be soon.

Discussing the upcoming third film, Urban could not confirm or deny it would be released in time for the 50th anniversary, but hinted that there was a pretty good chance. “I’m super-thrilled, super-excited about the direction it’s going in,” he said of the rebooted franchise.

He told the crowd that director Roberto Orci is a real fan and thinks he will do a great job with the third movie. Adding that he is “a huge fan of Trek”.

Urban promoted the September release of the Star Trek Compendium–a four-disc Blu-ray set that will include the first two movies and tons of extras.

On playing the “Bones” character, Urban said balancing his portrayal and infusing elements of Kelley’s was tricky. 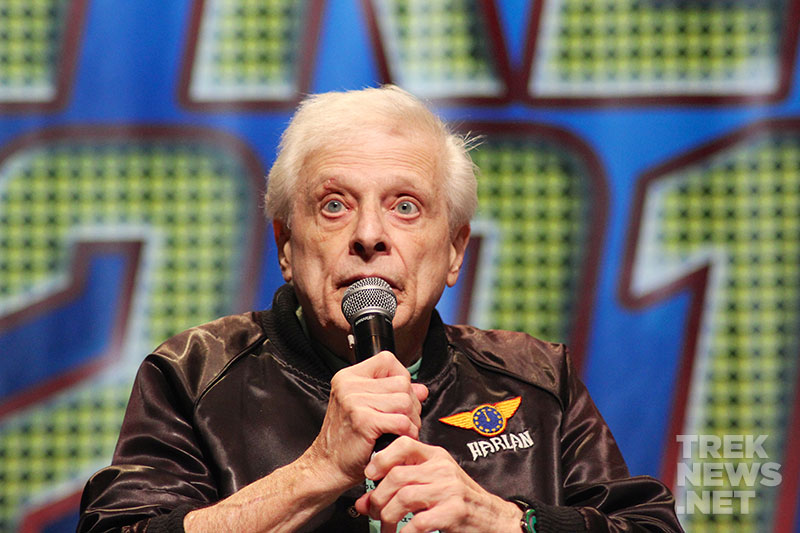 The gloves were off as Harlan Ellison made his first Creation convention appearance in twenty years, later in the day. Ellison, who published his 107th story this year, discussed his disdain for Hollywood. “I’m a nice guy, but I have a very low bullshit threshold,” he said. 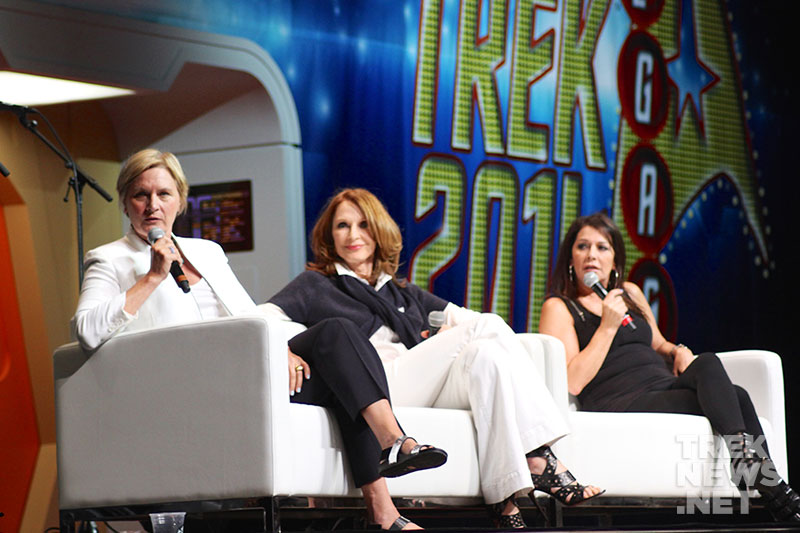 The women of TNG were up next, as Marina Sirtis, Gates McFadden and Denise Crosby took the stage.

“I wanted the fans to have a voice” Crosby said while discussing Trekkies and Trekkies 2.

During her time on TNG, Crosby said she was riding in an elevator with the members of Nirvana and Red Hot Chili Peppers, as the elevator doors opened, Dave Grohl looked at her and said “You’re f**king Tasha Yar!” 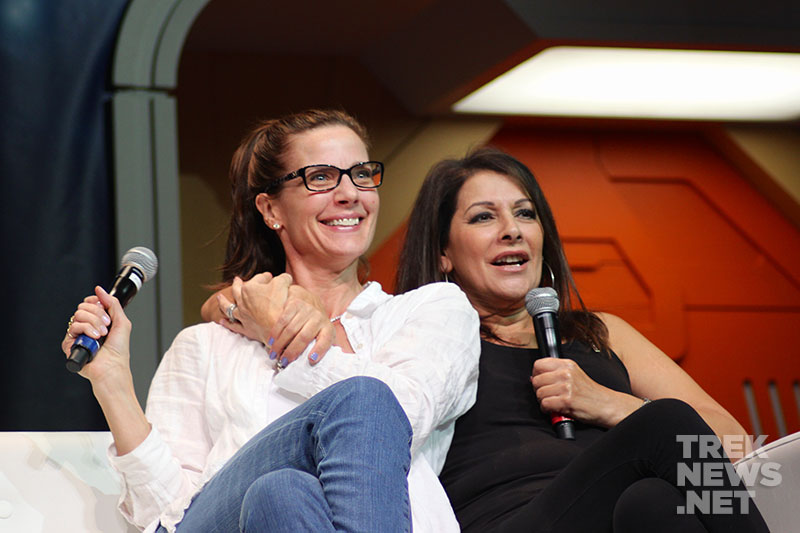 Joined by Terry Farrell on stage, Sirtis told the crowd that she suggested Farrell for the part of Jadzia Dax on Deep Space Nine. 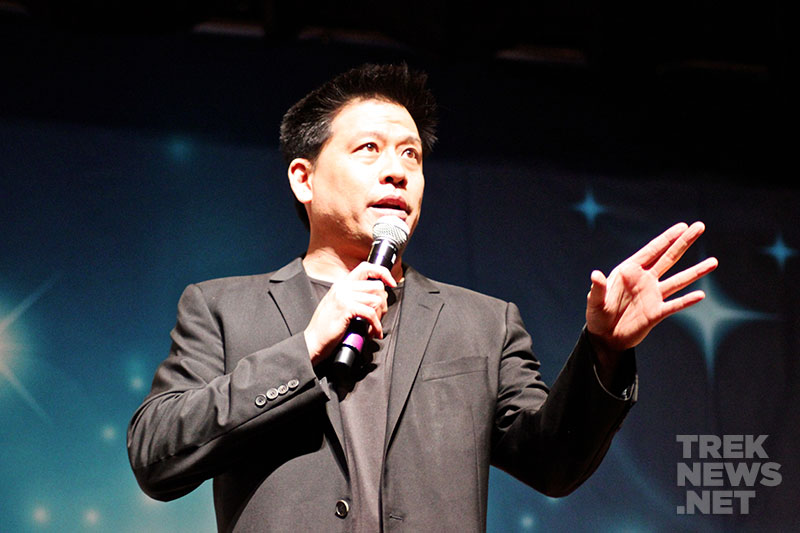 Closing out the first day was Voyager’s Garrett Wang. In his usual fashion, Wang did spot-on imitations of George Takei and Kate Mulgrew, drawing huge laughs from the Las Vegas audience.